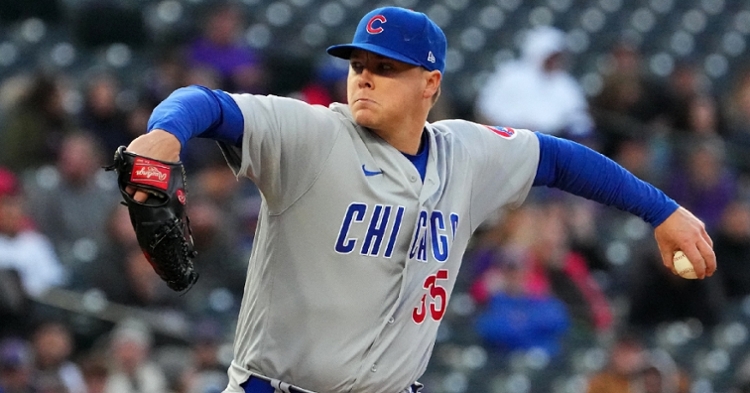 DENVER - Playing in the Rocky Mountains at Coors Field is hard enough, and the Chicago Cubs (4-2) pitching staff had a crash course on why. With Justin Steele keeping the Colorado Rockies (4-2) in check through four innings, it was in the fifth when he started to waver a little bit as the Rockies began to mount a rally.

That forced David Ross to go to his pen, and even that proved to be shaky at first. It wasn't until Keegan Thompson came in to play hero, silencing the Rockies offense for 3 1/3 innings of work while the Cubs added some huge insurance runs late for the 5-2 win.

The Cubs couldn't have asked for a much better start as they had Rockies starter Kyle Freeland on the ropes. With one down in the inning, Nick Madrigal and Jonathan Villar started the rally with a pair of singles before a Frank Schwindel RBI single made things 1-0. Things only got worse from there for Colorado as an errant pickoff throw led to the second run before Seiya Suzuki stayed red hot as his double made things 3-0.

Seiya knocks in his 10th run of the season! pic.twitter.com/vXNAm6CCG3

Freeland settled in nicely after that, but Steele was the story again. Despite allowing a pair of baserunners in the first inning, Steele was again impressive, allowing two runs on five hits in 4 1/3 innings. Both those runs came after he was removed from the game, as that now makes three straight impressive starts.

Following that three-run first inning, the Cubs had something going once again in the third, with Villar leading things off with a long double. Villar advanced to third following a Suzuki error, but the Cubs came away empty-handed with the score still sitting at 3-0.

Like Freeland, Steele had to deal with plenty of traffic on the bases, but only allowed singles during his outing. That meant that he was able to minimize the damage, which helped him work out of trouble and keep Colorado scoreless. Given where his pitch count was sitting, Steele began to run into trouble during the fifth, with Yonathan Diaz leading things off with a single.

Two batters later saw Charlie Blackmon work a walk which signaled the end for Steele. First out of the pen was the rookie Ethan Roberts who is quickly gaining Ross' trust. Unlike in his previous two outings, Roberts became a victim of the Colorado error as his pitches didn't have the same life they typically did.

Roberts benefitted from a costly baserunning play earlier in his outing, but CJ Cron doubled to put the Rockies on the board before a pair of walks pushed home another run to close the gap to 3-2. Hoping to end things there, Ross returned to his pen and brought in Thompson, who finished things off to keep the Cubs in front.

Hoping to cash in on better opportunities later in the game, Schwindel came through with his first homer as the solo shot put the Cubs up 4-2.

With one gone, Yan Gomes picked up a double ahead of the Michael Hermosillo double, and the Cubs were in business again. Ian Happ kept the line moving with his opposite-field single, chasing Freeland and giving the CUbs a 5-2 lead.

The Cubs had a chance to push more runs across, but the struggling Patrick Wisdom continued his horrendous start to the season, grounding into an inning-ending double play. Up three at this point, Thompson mowed right through the Rockies lineup as he allowed minimal baserunners to send the game into the ninth with the Cubs in front 5-2.

This was the second time that Thompson has relieved Steele in his start, and both times he has been impressive, leaving the door open to start later this season. Thompson also has a pending three-game suspension looming and will pitch until he hears the final verdict.

With just three outs standing between the Cubs and another win, it was Mychal Givens and not David Robertson who was called on for the save. Much like a lot of the Cubs pen, Givens has been solid to begin the season and continued that in this one. Despite allowing a one-out single to Kris Bryant, Givens responded and closed out the inning with a pair of strikeouts for his first save of the season. It was also the 30th career save for Givens, as he should get plenty of chances to close games this season.