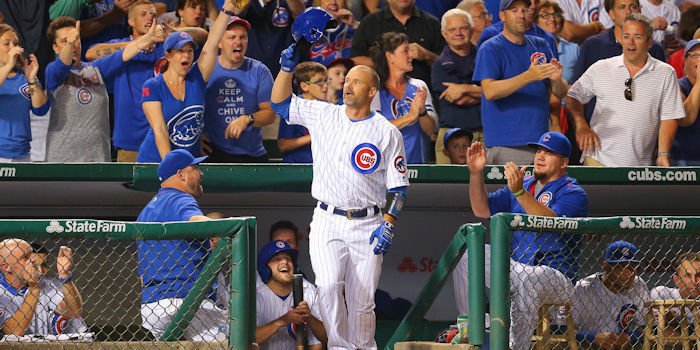 Chicago Cubs catcher and fan favorite David Ross received plenty of love from the fans on Sunday night, in what was the final regular season home game of his career.

CHICAGO -- Chicago Cubs catcher David Ross has produced 15 hard-fought seasons in Major League Baseball, including the past two for the Cubs. Now in his final season, Ross has gone largely underappreciated throughout his MLB tenure, making it only appropriate that the gritty backstop experienced perhaps the most magical night of his career in the Cubs’ 3-1 win against the St. Louis Cardinals on Sunday night.

With a pregame tribute that brought the 39-year-old to tears and multiple in-game curtain calls and standing ovations, Ross was showered with affection by the Wrigley Field faithful. Ross returned the favor, though, helping lead the Cubs to victory with a surreal solo home run to left-center in the bottom of the fifth that put the Cubs up 1-0.

Known as an infectious locker room personality and, of course, as starting pitcher Jon Lester’s battery mate, Ross has become a fan favorite over the course of his two seasons in Chicago. Needless to say, the fifth-inning blast, Ross’s 10th long ball of the season, brought the bleacher creatures to their feet and produced a much-deserved curtain call for the veteran catcher.

Ross received the pregame tribute and in-game adulation because of the fact that Sunday night’s matchup was the last regular season home game of the year for the Cubs and, therefore, quite possibly the last time that Ross will start at Wrigley. Ross was even taken out of the game in an unorthodox, yet dramatic, fashion, with Chicago manager Joe Maddon making a mound visit to relieve Ross of his catching duties. Ross finished the game 1-2 at the plate, with one walk and the aforementioned homer.

Lester played his part perfectly in helping Ross have a night to remember, pitching 6.2 innings of three-hit ball. Lester collected the win on the evening, his 10th straight in a start that earned him a decision, and improved to an impressive 19-4 overall. With seven strikeouts in the game and no runs allowed, Lester brought his strikeout total to 191 and lowered his ERA to 2.28, the second lowest in the majors.

The Cubs’ starting middle infielders provided Chicago with a little breathing room in the sixth. Second baseman Ben Zobrist led off the bottom half of the inning with a double to left, and shortstop Addison Russell reciprocated with a double to left of his own that scored Zobrist and provided the Cubs with a 2-0 lead.

Cubs reliever Justin Grimm took the hill in the top of the eighth and endured a worrisome inning, fighting through two jams with runners on the corners. Cardinals third baseman Jhonny Peralta took advantage of the first of those situations by bringing right fielder Jose Martinez home for the Cardinals’ first run and advancing third baseman Matt Carpenter to third. However, Grimm avoided giving up the tying run in the ensuing at-bat by getting Cardinals first baseman Brandon Moss to fly out to center, thus ending the inning, as well as the St. Louis scoring threat.

Zobrist and Russell sparked another offensive upswing for the Cubs in the bottom of the eighth, as they led off the action with a single and a walk, respectively. Zobrist was later scored on a single to right field off the bat of Chicago catcher Willson Contreras, the rookie’s 33rd RBI of the season. With a comfortable 3-1 lead at the inception of the ninth inning on his side, Cubs closer Aroldis Chapman made quick work of the Cardinals’ batting lineup to earn his 36th save of the year. On the flip side, Cardinals starting pitcher Carlos Martinez was named as the game’s loser after allowing six hits and two runs, dropping him to 15-9 overall.

With the 3-1 victory over the Cardinals (81-74), the Cubs (99-56) finished the regular season home slate with a record of 57-24, which currently gives them the best home winning percentage in baseball. The 57 home victories are the most ever garnered by the Cubs in a single season. Additionally, the Cubs’ 99th win on the year marks the first time that they have reached that milestone since the 1935 season. Chicago will finish the regular season with a seven-game road trip entailing a four-game series at the Pittsburgh Pirates (77-78) and a three-game series at the Cincinnati Reds (65-90). Merely playing for posterity at this point, the Cubs have already locked up homefield advantage throughout the National League playoffs. Rest assured, though, wily skipper Joe Maddon will be looking to guide his Cubs into the playoffs with as much momentum as possible. With that being said, expect the North Siders to give it their all as they wrap up the regular season.