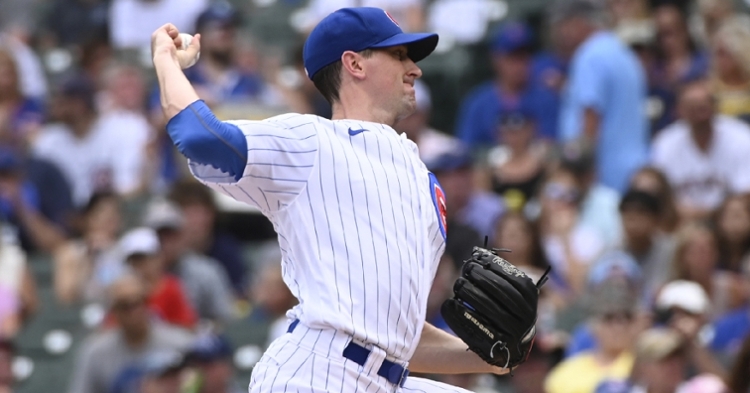 Make that nine straight wins for the Brewers against the Cubs as they ran their season record to 13-3 against the North Siders. Much like many games this season, the Cubs had a hard time hitting Brewer pitching as they dug themselves a massive hole they couldn't get out of.

Despite Brandon Woodruff going just three innings, the Cubs managed to push across only one run off him, with Rafael Ortega earning a bases-loaded walk in the second. That did the Cubs no good when Kyle Hendricks had not only a rare off day, but the worst outing of his career. Not only did Hendricks allow five runs in the second inning, but he was charged with nine earned runs in four innings of work, with Manny Pina delivering the final blow with a grand slam to make it 9-1.

Jace Peterson followed up his two-run shot in the second with a two-run single in the sixth before Pina connected for his second homer of the day, extending the lead to 13-1. A homer by Luis Urias in seventh put the Cubs in a massive 16-1 hole, as that summed up the Cubs season so far against the Brewers.

Frank Schwindel and Patrick Wisdom gave the fans something to cheer about in the seventh they connected for a pair of solo shots to make things 16-3. That was about all the excitement the Cubs had with Urias adding a second homer later in the game to lift the Brewers to a 17-4 victory over Chicago.

The hits keep on coming

No, I am not talking about the hits by the offense, but the hits the team continues to take over the past weeks. As if losing the core players at the deadline wasn't bad enough, Jake Arrieta was released earlier in the day on Thursday following a series of horrendous starts. His second tenure with the Cubs did not go as planned, as he went 5-11 with a 6.88 ERA.

To make matters worse, Willson Contreras hit the IL as he is dealing with some knee soreness at the moment. Given how much Contreras has caught this season, this is the perfect time to give him load management as Robinson Chirinos and Andrew Romine will be handling the catching duties the next few weeks.

This series highlighted everything that is wrong with this Cubs team and how good the Brewers are. Milwaukee has an incredible staff armed with hard throwers and CY young candidates, whereas the Cubs have one reliable starter in Hendricks. Offensively, the Cubs are trotting a minor league-looking lineup while the Brewers have plenty of big bats capable of making you pay.

The amazing thing is the Cubs payroll is often twice to three times the size of the Brewers, so to see them heading in opposite directions shows how unpredictable baseball is. This is the harsh reality of the sport as nothing is as it seems.

Having brothers face off against each other isn't very common in today's game. Even less common is having two brothers in the same organization, let alone the same team. For the Romine boys, that is precisely what they have a chance to do as Austin was activated from 60-day IL and is now on the same team as his older brother Andrew. The two of them have faced off against each other when Austin was with the Yankees and Andrew was with the Tigers, but they have never played together on the same team.

Now, not only do they have the chance to do that, but they have an opportunity to be in the same starting lineup. That is something the two of them are certainly thinking about, and if it happens, it will be a moment neither of them will forget. When the Cubs signed Austin this offseason, the goal was to provide Contreras with a reliable backup capable of playing several positions.

Instead, Romine saw action in seven games before hitting the IL with a rash of injuries. On the other hand, Andrew has spent the entire season in Iowa and has given the Cubs quality at after quality at-bat in the process. Since his call-up, Andrew has continued that approach which is something the Cubs love to see. The two of them are happy to be reunited on the same baseball field and are just waiting for that moment to make history together.

This wasn't just your ordinary PPP moment though, his brother Austin was catching. pic.twitter.com/m3Hts4OyWR

There was more history on display at Wrigley, and it wasn't necessarily good history. Hendricks served up the worst outing of his career, allowing a career-high nine earned runs in just four innings. That wasn't the worst of it, as the end of the homestand itself brought more history.

The last time the Cubs lost seven consecutive games on a homestand was back in 1943. With the loss, the Cubs also dropped 10 consecutive home games for the first time since 1994. However, the Cubs did something they have never done before, and that is failing to win a single game on a homestand of at least seven games or more.

The team has lost seven games on a homestand before, but they have never gone winless on a homestand of this length in the franchise's history. Looking back at how long this franchise has played baseball, they have reached a new futility low in terms of painful memories. This just sums up the Cubs season and how it has gone for them as they have now dropped eight straight games in August and are 1-10 to start the month.