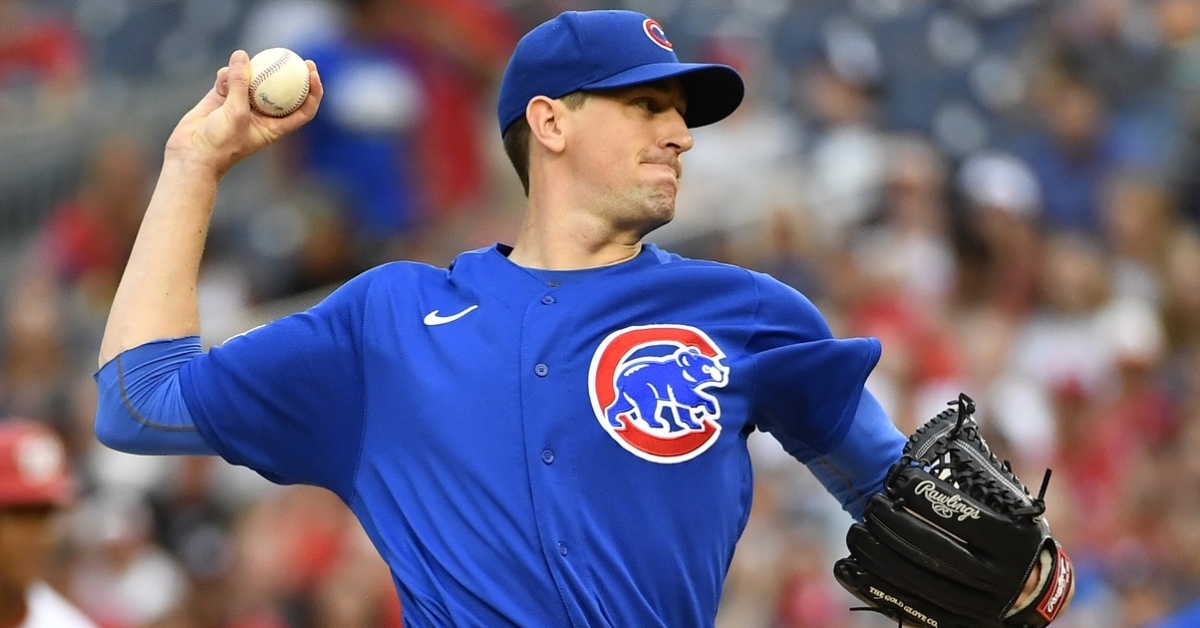 Despite all the changes that this team has gone through over the last 72 hours, one constant remains the same. That would be when Kyle Hendricks has the ball, chances are the Cubs are going to win. Entering his start on Saturday, Hendricks holds a 12-4 record with 10 consecutive decisions without losing.

Despite only striking out three hitters in his outing, Hendricks walked one and allowed one run on four hits in seven impressive innings of work. That run came in the first inning off a Yadiel Hernandez double as he tied the game up 1-1 at that point.

The rest of the night was all Cubs as they not only got to Joe Ross on the mound, but Hendricks kept the Washington bats in check as he continues to go about his business. With the score still tied 1-1 in the fourth inning, the Cubs used a big inning to take the lead and bust the game wide open in the process. A David Bote double started things off, before he came around to score on a Sergio Alcantara bloop single to make thing 2-1.

Making his first start of the year for Chicago, Andrew Romine ripped a double down the left-field line to push the lead to 3-1 before Rafael Ortega capped off the four-run fourth with a two-run shot to center, giving the Cubs a 5-1 lead. Chicago later extended that lead to 6-1 on a Jason Heyward single before the Nationals made things a bit interesting off Rex Brothers in the eighth.

Not only did Brothers struggle allowing an RBI single to Josh Bell and a sacrifice fly to Carter Kieboom, but he left with the bases loaded as his ERA rose to 4.81 on the season. That forced David Ross to go with the newest Cub Codi Heuer who was able to work around the bases-loaded jam to keep things 6-3. Kyle Ryan then came into the game to secure his first save of the season and lock down the win.

Ortega and his leadoff skills

This is starting to become a broken record for the Cubs as they have now gone five seasons without a legitimate leadoff threat. While they may not have a long-term option on their roster at the moment, Ortega is doing his best to not only remain there this season but is showing he could be an answer next year.

Primarily a journeyman bench player across his career, Ortega seems to have found a home in Chicago this season and is playing like a starter. Signed as a minor league free agent this winter, Ortega put on an impressive showing during spring training and was the final roster cut Ross made before the season.

While at Iowa, Ortega continued to go about his business as he continued to play just as well as he did in spring. Once the injuries to Jake Marisnick and Heyward happened, it opened the door for Ortega to get the call, and he hasn't looked back. Not only has he been one of their best pinch hitters this season, but his average has risen to .294, and he has been a perfect option in the leadoff role.

His mix of speed, contact, and surprising power from time to time reminds me a lot of Dexter Fowler just without the home run power. With the Cubs now in transition mode, Ortega will be their leadoff hitter the rest of the way, but could very easily remain on this team next season.

Class is in session

When you talk about the elite starters in the game, Hendricks' name is never mentioned. That is a slap in the face to him as he has posted the fifth-best ERA in major league baseball since the 2016 season. While the wins have not always translated, they have this season, where Hendricks now leads the major leagues with 13 wins.

Not someone who will typically earn CY Young consideration because of his pitching style, Hendricks has more than pitched like an Ace this season as he has been the ace of the Cubs staff. With his win last night, he has gone two months since his last loss and continues to go about his business despite his fastball sitting around 87 MPH.

Kyle Hendricks has won 11 consecutive decisions and leads the majors with 13 wins. pic.twitter.com/NU7ssP976N

What happens to the closer role?

With Craig Kimbrel now on the southside, the Cubs are without a closer. To fix that, the Cubs may have to go with a closer by committee format the rest of the way, given the lack of experience on this roster. Not only was Kimbrel dealt, but so were Ryan Tepera and Andrew Chafin, as those two would have been the most likely replacements.

In their first save opportunity since Kimbrel's departure, Ross turned to Ryan as he picked up his first save of the season and fifth career save. Ryan is certainly a name that should see some save situations, but what about some others on this roster?

Manny Rodriguez has closer experience in the minors and has the best pure stuff of anyone on the staff right now. He could be given some chances if Ross feels the need.

Guys like Dan Winkler and Dillon Maples have also seen closer time over their careers, but their lack of consistent command will most likely keep them out of that spot this season. Looking in the minors, you have Tony Cingrani, who is pitching lights out in Iowa with the recently promoted Jake Jewell, who could see chances at some point this season.

However, the two names to keep an eye on are Rowan Wick and Ben Leeper. Wick, has been sidelined all season with an oblique strain and has been rehabbing the past two weeks. After beginning his rehab in South Bend, Wick is now in Iowa, where his next step would be Chicago. One of the set-up men for the Cubs in 2019 and 2020, Wick has all the stuff to be close and saw plenty of save chances last season when Kimbrel struggled. He could be the short-term answer this season.

On the other hand, Leeper is the one name that I am surprised isn't in the pen right now. Taken as an undrafted free agent in 2020, the former Oklahoma St. pitcher is already in AAA and has been pitching lights out. Not only has his command been impressive, but his ERA has been under 2.00 much of the season while pitching in high leverage situations. He is by far the Cubs' best pure relief prospect at this point, and he needs to be given an opportunity this year.