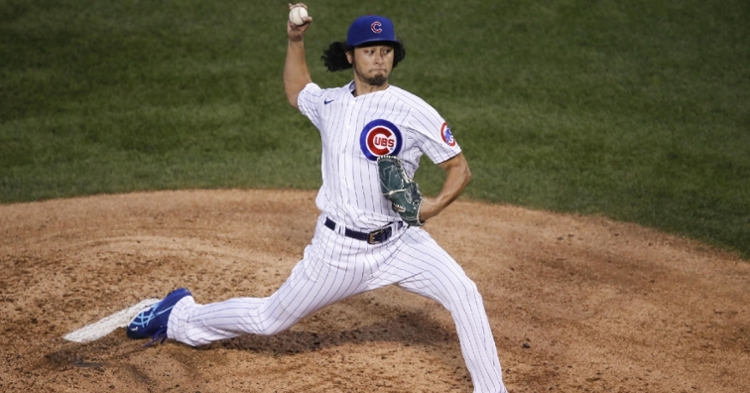 CHICAGO — The home portion of the regular season schedule for the Chicago Cubs (31-22) ended with a resounding thud for the North Siders, as the Minnesota Twins (33-22) shut them out at Wrigley Field on Sunday. In addition to serving as the finale of the three-game series, the contest marked the final regular season game of the year at the Friendly Confines.

Hurting his chances of winning the National League Cy Young Award, Cubs ace Yu Darvish gave up four runs on nine hits and one walk in six innings pitched. Darvish, who struck out nine, received practically no offensive support, with the Cubs mustering just four hits and getting skunked 4-0. Jose Berrios, the brother-in-law of Cubs shortstop Javier Baez, started on the mound for the Twins and tossed six scoreless frames.

T1: Max Kepler tagged Darvish for a single in the game's first plate appearance. Following a walk, Kepler came home on an RBI single by Eddie Rosario. The Twins loaded the bases with one out, but Darvish minimized the damage by striking out the next two batters.

Raise your hand if you guessed Kepler! ?????@ChickfilA | #MNTwins pic.twitter.com/QDfU1FLMVD

B1: An infield single by Kris Bryant was all that Berrios allowed his first time out.

T2: In the top of the second, Cubs left fielder Kyle Schwarber suffered a defensive blunder that likely resulted in him being removed from the game. Jake Cave smacked a leadoff triple to left, but if Schwarber had hustled to field the ball after it ricocheted off the basket atop the wall, Cave would have likely been limited to a double. Two at-bats later, Cave hustled home when a ground ball was hit, increasing the Twins' early lead.

T3: Cameron Maybin replaced Schwarber in left at the start of the third. Schwarber was visible in the dugout for the remainder of the game, so an injury issue assuredly had nothing to do with his benching. Darvish worked a 1-2-3 inning that included two Ks.

B3: Jason Kipnis and Anthony Rizzo both singled in a scoreless frame.

T4: The Twins were sat down in order in the fourth.

B4: Contreras hit a leadoff double and advanced to third on an ensuing groundout. He then tried his luck by heading for the plate when a ground ball was hit right to Josh Donaldson at third. Donaldson fired home, and Contreras was tagged out.

T5: Donaldson came up with a single off Darvish in the top half of the fifth but was left stranded.

B5: Berrios sat the Cubs down in order in the bottom half of the fifth.

T6: Jorge Polanco smacked a one-out double and took third on a wild pitch, but Darvish was able to prevent the Cubs' deficit from growing in the sixth.

B6: Two flyouts and one strikeout made up Berrios' final inning of work.

T7: Marwin walloped a leadoff double that hit off the center field wall. Kepler then took Darvish deep on a two-run drive into the right field bleachers, resulting in Darvish being relieved by Ryan Tepera. Tepera outed three batters in a row to get out of the inning.

B7: Trevor May struck out a pair in a three up, three down seventh.

T8: Jason Adam kept the Twins off the bases in his sole inning pitched.

B8: Taylor Rogers walked Ian Happ with one out, but the Cubs remained scoreless through eight.

T9: Andrew Chafin made his Cubs debut in the ninth, toeing the rubber for the first time since being dealt to the club at the trade deadline. Bryant helped Chafin's cause by making an impressive diving stop at third and throwing across the diamond to out Gonzalez. After that, Kepler hit a two-out double, and Donaldson was intentionally walked. Chafin then regained his composure and forced Rosario to ground out.

Before tonight's game, Ross said: "KB's playing some of the best third base I've seen him play since maybe early on in his career."

B9: Sergio Romo finished the Cubs off, despite giving up a couple of baserunners. A passed ball suffered by Mitch Garver on strike three allowed Contreras to reach first. Romo next hit Heyward in the foot with a pitch that got away from him, and, with two outs, Victor Caratini drew a walk to load the bases. Nico Hoerner struck out swinging to end the game, as he was unable to check his swing on the third strike.

Berrios earned the win and improved to 5-3, while Darvish dropped to 7-3 as a result of the loss. The Twins took 2-of-3 from the Cubs in the lone series of the season between the two. Chicago was limited to a meager two runs in the three-game set. Heading into the final week of the regular season, the Cubs sport a 3 1/2-game lead in the National League Central.

Up Next: The Cubs' final seven games will be played on the road, beginning with a contest at PNC Park on Monday, Sept. 21. In the opener of a four-game series between the Cubs and the Pittsburgh Pirates (15-38), Cubs lefty Jon Lester (2-2, 4.91) and Pirates righty JT Brubaker (1-2, 4.79) will start on the mound. The first pitch is scheduled for 6:05 p.m. CDT on a clear, mild night in Pittsburgh.