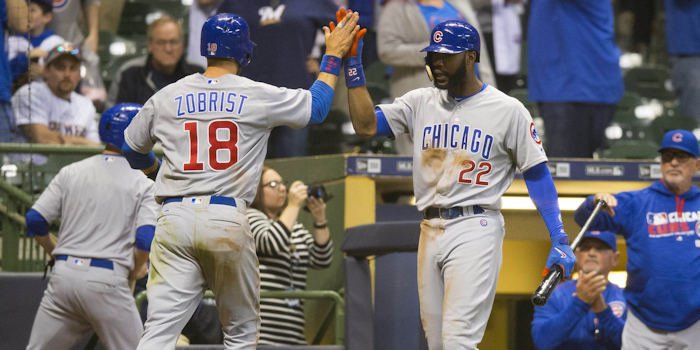 Entering Wednesday night’s game between the Chicago Cubs (28-10) and the Milwaukee Brewers (17-23), the Cubs were on a two-game losing streak and had lost four out of their last six. Therefore, Chicago was playing with extra motivation as it downed the Brewers 2-1 in what was a magnificent 13-inning National League Central clash that lasted five hours.

Though Chicago starter John Lackey had a solid outing, pitching six innings of four-hit ball, the hero of the game for the Cubs was reliever Travis Wood. Wood pitched 1.1 clutch innings in extras, and, more importantly, he brought in the game-winning run by being walked in the top of the 13th inning. Marking the first time a pitcher has drawn a go-ahead walk in extras since Chan Ho Park did it in 1996, which, ironically enough, occurred against the Cubs. Wood’s gritty walk enabled second baseman Ben Zobrist to score the winning run.

In the bottom half of the inning, Clayton Richard escaped from a jam, forcing a two-out groundout with runners on second and third. As a result, Richard earned the first save of his career, and Wood earned the win.

The Brewers were the first to get on the board, with center fielder Kirk Nieuwenhuis coming home on a fielder’s choice groundout in the bottom of the fifth. Nieuwenhuis led off the inning with a double to deep left. Cubs catcher David Ross helped prevent more runs from crossing the plate that inning by throwing out left fielder Alex Presley as he was attempting to steal third. Overall, the game saw a whopping five runners get caught stealing, and Ross, who also picked off a runner at first, was responsible for three of them.

The Cubs were practically impotent offensively prior to the ninth, when Cubs first baseman Anthony Rizzo was hit by a Jeremy Jeffress pitch to lead off the inning. Jeffress, the Brewers’ closer, soon after found himself in quite a pickle, with runners on second and third for Chicago and only one out. Cubs shortstop Addison Russell brought in one run on a groundout to second, but, after an intentional walk of the next batter, pinch-hitter Tim Federowicz struck out swinging to end the top half of the inning.

The Cubs had a similar chance to take the lead in the next inning, with runners on second and third and two outs, but Zobrist grounded out, thus causing the Cubs to miss out on another scoring opportunity. However, Zobrist singled in the top of the 13th and stole second, putting the Cubs in position to go ahead in the game. After a hit by pitch, a strikeout and an intentional walk set the stage for the dramatics, Wood drew a walk and gave the Cubs their first lead of the game. Center fielder Dexter Fowler lined out to end the inning for Chicago, but Richard closed things out in the bottom of the 13th.

Entering the game, the Cubs were off to their best start through the first 37 games of the season since 1907, when they went 29-8. No rest for the weary as the divisional series concludes tomorrow, with undefeated Cubs pitcher Jason Hammel facing off against Junior Guerra of the Brewers at 12:40 CT.