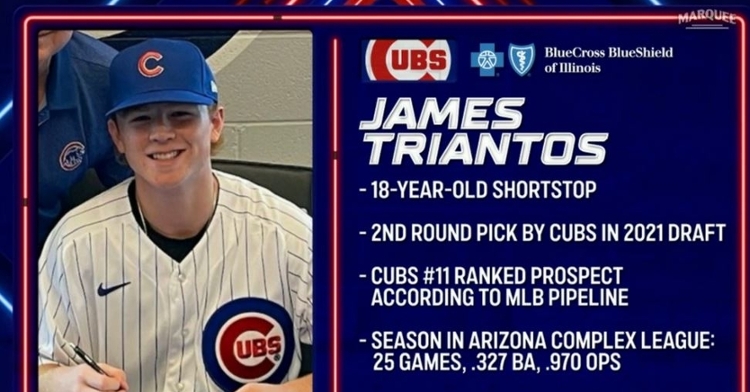 Triantos is an impressive prospect for the Cubs

Selected by Chicago in the second round of the 2021 Draft out of James Madison High School in Vienna, Va., the right-handed hitting Triantos batted .327 (33-for-101) with seven doubles, one triple, six home runs, 19 RBI, 27 runs scored and a .970 OPS in 25 games for Arizona Complex League Cubs this season. He played eight games at second base and seven games at shortstop while also playing 10 games as the team’s designated hitter.

Acquired by Chicago from Oakland on July 26 with outfielder Greg Deichmann for pitcher Andrew Chafin, Palencia in seven starts with Myrtle Beach to close out the season was 1-0 with a 3.67 ERA (11 ER/27.0 IP) with 18 walks and 38 strikeouts, good for an average of 12.7 strikeouts per 9.0 innings. He allowed just two home runs and six extra-base hits in 115 batters faced, contributing to a .179 opponent average and a .597 opponent OPS.