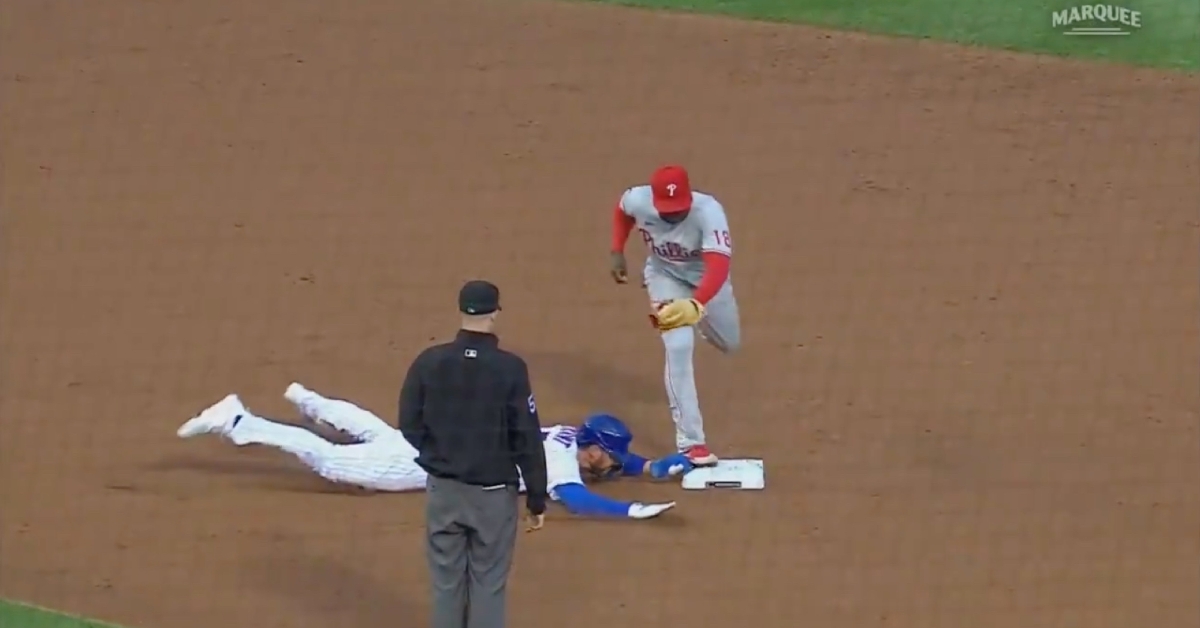 Kris Bryant was shaken up after having his left hand cleated on the basepaths in the bottom of the first.

CHICAGO — Chicago Cubs third baseman Kris Bryant did not take the field at the start of the fourth inning on Wednesday, and it likely had to do with a play that took place at second base in the first frame. Bryant's left hand was stepped on by Philadelphia Phillies shortstop Didi Gregorius, and Bryant showed signs of discomfort afterward.

Bryant was initially called out at second base as part of an inning-ending double play, with catcher Willson Contreras lining out to second baseman Jean Segura, who threw to Gregorius in order to double off Bryant. However, a successful Cubs challenge revealed that Bryant's left hand touched the bag in time, and Bryant was ruled safe as a result.

Btm 1st – @Cubs challenge call that Kris Bryant is out at 2B; call overturned, runner is safe. Powered by @Mitel. pic.twitter.com/RwFmrWQDv1

Although he was wearing a protective mitt on his left hand, Bryant assuredly still felt pain from being cleated by Gregorious as the shortstop tried to beat Bryant to the bag. Needless to say, the injury could have been far more severe had Bryant not been wearing the protective mitt. After unintentionally stepping on Bryant, Gregorious was apologetic. Coincidentally, Bryant reached in the bottom of the first because of a fielding error committed by Gregorious.

While Bryant remained in the game for the time being — and scored a run in the first inning and struck out in the second inning — he was pulled prior to the fourth inning. The Cubs led the Phillies 5-0 entering the top of the fourth, and Patrick Wisdom took over for Bryant at third base.

Kris Bryant has been removed from tonight's ballgame, likely due to injury when his hand was stepped on while diving back into 2nd base by @Phillies SS Didi Gregorius in the 1st inning.@Cubs #GoCubsGo pic.twitter.com/yhZkzmrGGs

UPDATE: The Cubs later announced that Bryant was removed from the contest not because of a left hand injury but because of right hamstring tightness.