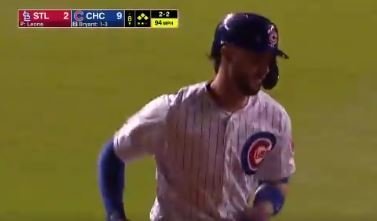 The Chicago Cubs are firing on all cylinders now in 2019.

In the eighth inning against the rival Cardinals Sunday night, Kris Bryant smacked a grand slam to center field that put the Cubs up 13-2.

It was his fourth homer of the season and it traveled an estimated 417 feet with an exit velocity of 100.5 MPH. The Cubs offense has 10+ runs this season which is tied for most in the major leagues. The grand slam for Bryant was his fourth of his standout career.

The last time that the Cubs hit grand slams on back-to-back days was May 30-31 in 2013 according to ESPN Stats and Info.