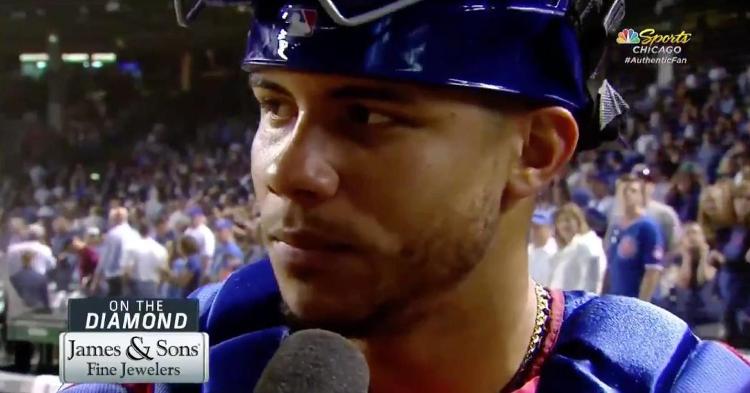 CHICAGO — Chicago Cubs Willson Contreras was responsible for plating the Cubs' first two runs of the night in their 8-3 win over the Atlanta Braves on Monday. Prior to hitting an RBI single in the bottom of the fourth, Contreras went yard with a solo dinger smacked out to right at Wrigley Field in the bottom of the second that put the Cubs up 1-0. However, the home run was overshadowed by the bench-clearing confrontation that followed it.

Contreras got into a spitting match with fellow backstop Tyler Flowers of the Braves, who was not pleased with Contreras barking at him before beginning his home-run trot. It appeared that Flowers interrupted a conversation that Contreras was having with the home-plate umpire during his second-inning at-bat about a questionable strike call. Both benches cleared over the minor tiff, but nothing serious came of it. In his postgame interview with NBC Sports Chicago reporter Kelly Crull, Contreras confirmed that Flowers butting in to share his unwarranted opinion concerning the strike call was what sparked Contreras' fiery reaction to his homer.

In addition, Contreras claimed that he felt that the tiebreaking long ball set the tone for the remainder of the game, which it did, as the Cubs gradually wore away at Braves starter Julio Teheran until they collected a slew of runs in the fifth inning to chase him from the game. Ultimately, Contreras went 2-for-4 with three RBI at the dish, and he backed up his bravado with a solid performance. Contreras' big night ended in fitting fashion, with Flowers getting rung up for the final out of the game.

Willson Contreras explains what happened during that confrontation after his home run (@JandSJewelers) pic.twitter.com/eCX4sAG4HN

Contreras said the following about the incident to reporters on Tuesday:

"I was just having a conversation with the umpire," Contreras said. "What bothers me was I was talking to the umpire, not even to Flowers, and he got into the conversation. So I just told him, 'Do your job, I'll do mine.' And then when I rounded the bases, I had a reminder when I got to home plate -- 'I told you do your job, and I'll do mine.' That's it. But what bothered me was he got into the conversation when I wasn't even talking to him."

"He's pretty good behind the plate getting pitches (framed for strikes)," Contreras said. "My conversation was only with the umpire, because he called a low pitch on Kyle Schwarber too that wasn't close to the strike zone. And that was my complaint. And all of a sudden he got into the conversation, which irritates. I'm glad that I kept my focus on my at-bat. I'm glad I was able to put the barrel on the ball. Then when I saw the ball go out of the yard, I said, 'OK, I'm going to tell him to do his job and I'll do mine.'"