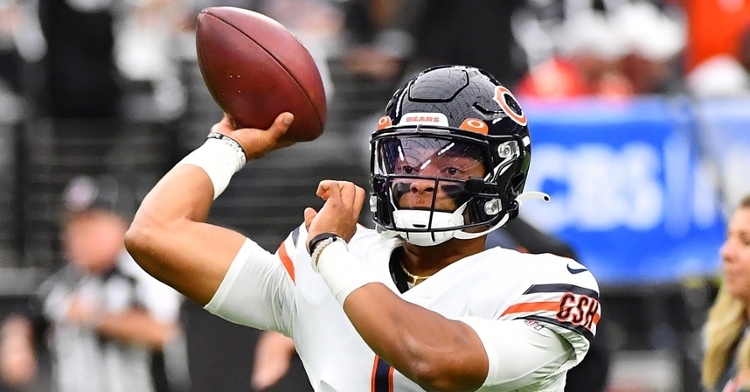 LAS VEGAS – Making his first start since being named the Bears QB 1, Rookie Justin Fields was also looking for his first win on the road. Leading the Chicago Bears (3-2) into Las Vegas to take on the Las Vegas Raiders (3-2), his second road start was vastly better than his first when he was hammered by Cleveland.

Although the numbers were once again not overly impressive, with Fields going 12-20 for 111 yards, he did manage to throw for his first career touchdown during the first half of the game. From there, the Bears did what they needed to do on both sides of the ball, especially on defense, as they got to Derek Carr and rattled him. That has been the key the past two weeks as the Raiders have now dropped two straight, falling to the Bears 20-9.

After what fans witnessed through the early portion of the first quarter, many felt it was going to be a low-scoring game as neither offense was able to get anything going. With the two sides combining for three punts over their first three possessions, the Raiders finally cracked the scoreboard first, putting a lengthy 13 play drive together that accounted for more than six minutes on the clock.

Carr wasn't at his best, but on this drive, he was doing what he needed to do to push the ball, finding multiple targets for first down yardage. That helped open the running game where Josh Jacobs and Kenyan Drake took over as the Raiders were knocking at the door. Jacobs capped that drive off with what looked to be a touchdown, but a costly penalty forced the Raiders to settle for a 31-yard Daniel Carlson field goal. Miscues were the story for the Raiders all game long.

Looking to respond after spotting the Raiders the first score of the game, Fields and the offense put together a long drive of their own, going 72 yards and needing 10 plays to do it. The drive didn't get off to the best start with Fields fumbling on the play, but the Bears retained possession with the ball rolling out of bounds. One play later and a penalty pushed the Bears further back as Chicago was in desperate need of some momentum.

Look no further than Damien Williams, who is filling in for an injured David Montgomery. His ability to catch passes out of the backfield gave Fields an excellent safety valve. Williams combined with rookie Khalil Herbert as the two of them expect to do a running back by committee to make up for the loss of Montgomery. Facing a second and goal situation from the two, Fields found Jesper Horsted for his first NFL touchdown pass to give the Bears the lead for good 7-3.

Carr responded following that touchdown by hooking up with Henry Ruggs for a 29-yard strike setting the offense up near midfield. That was as much success as he would have as a costly penalty put the offense in a tough spot before turning it over on downs to give the ball back to the Bears. Give Chicago some credit. They may not score much, but when they do, they make sure to get lots of plays in, going 85 yards and needing 16 plays to take a commanding lead at the half.

For the most part, it was the ground game that got the job done, but Fields also had to complete a few passes, including another one to Darnell Mooney for 15. With the ball in Raiders territory, Fields did his best to avoid pressure only to get taken down for the sack. To make matters worse, Fields left the game briefly as Andy Dalton was called on in relief.

It was at that moment when you could see the Bears fans hearts sink as they were hoping for nothing but the best from Fields. Three plays later, there was an enormous roar from the crowd as Fields was back on the field looking to finish what he started on this drive. A first down completion to Allen Robinson helped set things up for Herbert and Williams as Williams plowed his way into the endzone from four yards out to give the Bears a 14-3 lead at the half.

Much like the first half, neither team was able to get much going to start the second half with both teams punting on their opening possession. On their second possession of the second half, the Raiders made their next costly mistake as Carr took a deep shot downfield only to be intercepted by DeAndre Houston-Carson. Unfortunately, the Bears offense couldn't capitalize as the Raiders remained within two scores.

With the Bears defense continuing to make life difficult for the Raiders, it was up to the offense to do the same, and that wasn't the case for much of the second half. That left fans uneasy as the Raiders put together another long 16-play drive that spanned the end of the third and early portions of the fourth quarters.

The Bears did a great job rattling Carr and forcing him to make bad decisions, but when he was given time, he found Ruggs for several big plays, including another one on this drive to move the chains. Jacobs began to use his legs to compliment the passing game, which became more important when Nathan Peterman entered for a few plays. Jacobs capped off the long drive with a one-yard score as the Raiders pulled within 14-9 following a missed two-point conversion.

As the Raiders continued to get closer, there was an uneasy feeling for Bears fans as the offense couldn't get anything going throughout the second half. The best way to erase some of those doubts was to put together a lengthy drive of their own as the Bears answered that touchdown drive with a 10-play drive of their own.

Herbert played a significant role early on that possession until Fields hooked up with his favorite target Mooney again for another first down. Another first down pass, this time to Cole Kmet, put the ball in Raiders territory, where Chicago went to the ground once again. Although the drive stalled in the end, Cairo Santos was still able to connect for a 46-yard field extending the Bears lead to 17-9.

Holding that eight-point lead with less than three minutes to go, Chicago had a chance to put the game away if their defense could come through with one last stop. Not only was that the case, but they forced another turnover on downs for the Raiders, which gave them the ball back in Vegas territory. Santos capped off the scoring shortly after connecting on another 46-yard field goal for his 33 consecutive field goal make. That is the longest streak in the NFL as the Bears move to 3-2 and over .500 for the first time since last October, picking up a gritty 20-9 win.

As mentioned, Fields didn't need to do a ton with his arm, completing just 12 passes for the second straight game and throwing for 111 yards with that score. They made up for what the Bears lacked in passing on the ground as Herbert led the way with 75 yards, while Williams chipped in with 64 more to go with one score. Mooney led the Bears in receiving with 35 yards while Robinson added 32.

For the Raiders, Carr struggled to solve the Sean Desai defense, tossing for 206 yards and an interception in the loss. 56 of those yards went to Hunter Renfrow, with Ruggs adding 51. Jacobs led the way on the ground for the Raiders collecting 48 yards to go with his score.