Before anything else, I try to be realistic, and realistically I didn’t see the Cubs beating Kershaw and the Dodgers last night, anymore than I see them beating Ryu on Sunday. I did, however, think that behind Kyle Hendricks (7-4, 3.00 ERA), the Cubs would get past the Dodgers and Rich Hill last night.

Just like Thursday night, the Cubs jumped out to a 2-0 lead, this time on Anthony Rizzo’s blast in the first. The Dodgers would tie it in the second, but Kris Bryant would break the tie with a solo homer in the third. Once again, that was it for the Cubs, as the Dodgers added runs in the third, fourth and fifth innings.

Final score: Cubs-3; Dodgers-5. By the way, Cubs had the IDENTICAL box score last night. Three runs (on two homers), eight hits no errors, with two runs scored in the first and one scored in the third inning. Sadly, the outcome was also the same.

Let’s hope they can figure out how to beat Buehler tomorrow, or this will be a sweep.

I apologize for the short edition today, but the truth is, there hasn’t been much in the way of Cubs’ related news today. I’m almost beginning to feel as though this is the beginning of the quiet before the storm, as the Cubs prepare to start making deals, ahead of the July 31 trade deadline. Bear in mind; trade rules have changed, beginning this year. It used to be that the non-waiver trade deadline was July 31, but now it is a single deadline, so teams will be scrambling furiously before that day, trying to shore up their teams for the second half and final push.

Today’s question: What pitcher in that pen, other than Chatwood, could even hope to earn a 3-inning save? (I’ll wait).

The Mysteries of Maddon’s Mind: I have zero ideas why Maddon would pull Kyle Hendricks in the fifth when he was only at 84 pitches. Ok, so Hendricks had given up four runs, but he does seem to know how to pitch himself out of jams. If pulling him wasn’t enough, he replaced him with Kyle Ryan, then Brad Brach (who was good last night), then Mike Montgomery. Off the top of my head, I’m pretty confident that this trio owns just about the three highest ERAs and WHIPs in the pen. (By the way, Hendricks was charged with five runs, but Kyle Ryan allowed that last one to score).

Tense moment for Almora: After doing a fantastic job with a catch, bailing Mike Montgomery out of the in the seventh, Albert Almora Jr. was slow to get up, from what appeared to be either a head or neck injury.

Maddon said Albert Almora Jr. is fine. Pulled as a precaution after being banged up on the catch at the wall.

MLB Trade Rumors: In what appeared to be a fairly obvious objective for some time now, MLB Trade Rumors is all over Twitter with stories of the Cubs being in pursuit of deals to land left-handed relievers. Several names are popping up, as to who may be replaced: Tim Collins, Mike Montgomery, and Kyle Ryan. I still believe Montgomery and Happ could go, should the Cubs work out a deal with the Giants for Will Smith or Tony Watson, and those names have appeared among MLBTR’s speculations.

Lester on Wednesday’s loss: “Felt good about our game plan last night and thought we executed well early, just started catching too much of the barrel in those middle innings and couldn't get back on track. The foot is fine, still attached.”

Baseball quotes: “There's only one way to become a hitter. Go up to the plate and get mad. Get mad at yourself and mad at the pitcher.” -Ted Williams 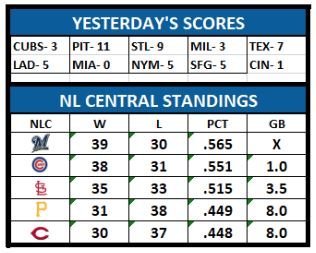