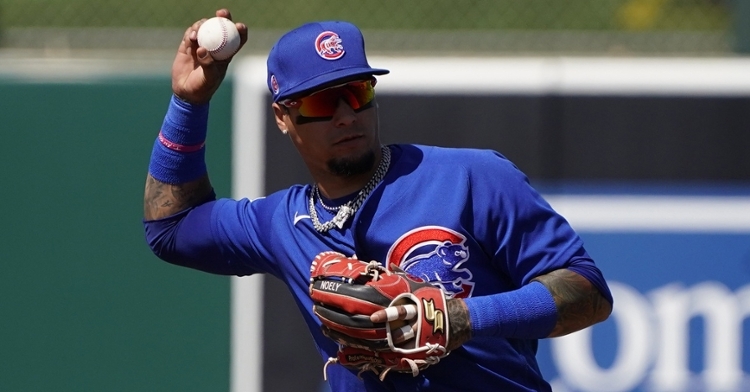 The Cubs continued their winning ways on Friday by knocking off the Oakland A's 6-1 during spring action. Getting the ball for the Cubs was Zach Davies as he looked to keep his great spring going. Opposing him was Oakland ace Frankie Montas who too was looking to build on a solid start to the spring.

Not only has Davies been sharp, but he has yet to allow an ER as the run allowed today came off an error for an unearned run. After a scoreless first from both sides, Willson Contreras stayed red hot by mashing a Montas pitch the opposite way for the solo shot. Oakland was able to answer in the bottom of the second when Elvis Andrus knocked home Mitch Moreland on an RBI groundout to tie things 1-1.

After that, it was all Chicago as they ended the game with five unanswered runs to back another strong effort from Davies.

data-tipped-options="ajax: { data: { type: 'Player', sport: 'baseball', playerId: '128' } }">Anthony Rizzo provided the game-winning RBI in the top of the third by ripping an RBI double to right-center field to plate Ian Happ. Speaking of Happ, he delivered the biggest blow of the game in the fourth inning as his bases-loaded double pushed the Cubs lead to 5-1. Rizzo followed that double up with another RBI hit, giving the Cubs a 6-1 lead.

With a five-run lead, it was time for David Ross to turn to the pen as Rex Brothers was the first of five relievers to enter the game. Not only did he keep his 0.00 ERA intact, but his two strikeouts were part of a 10-strikeout performance from the pen as the Cubs staff struck out 12 hitters. Ryan Tepera and James Norwood also picked up a pair of strikeouts in their scoreless inning Justin Steele earning one.

The one reliever who had to battle a little bit of adversity was Brad Wieck as he continues to round into baseball shape. After missing most of the camp thus far, Wieck made his Spring debut on Wednesday and pitched very well. Despite loading the bases with two walks and a hit, Wieck worked around it by striking out the side to keep the five-run Cubs lead intact.

Not only was pitching strong once again, but the offense continues to do their thing, picking up nine hits on the afternoon. Rizzo led the way offensively with three hits to go with his two RBI's while Jason Heyward went 2-2. Javier Baez, Contreras, Happ, and Ilderamo Vargas added the team's final four hits as the Cubs improve to a spring-best five games above 500 at 10-5-2. The Cubs will be back on the field tomorrow as they battle the Colorado Rockies for the second and final time this spring.

When the Cubs traded Yu Darvish to San Diego in exchange for a boatload of prospects, Davies was the critical piece to the deal. Expected to slide into the rotation behind Kyle Hendricks, Davies was looked at as a potential breakout performer this season.

Not only has he been pitching well this spring, but some might argue that he has pitched better than Hendricks posting a 0.00 so far. At this point, it would take a lot for Hendricks not to get the ball on Opening Day, but Davies is certainly making a case to be named the Cubs ace to open the season.

The Cubs are piling up the strikeouts

As spring got underway a few weeks ago, there was a lot of concern regarding the Cubs pitching staff. Granted, there still might be some concerns here and there, but it does seem like David Ross may have more options than even he expected.

While many of those options may wind up in the minors to start the season, one thing fans will notice so far is the number of strikeouts this team is piling up. Fresh off a 16 punchout game on Thursday, the Cubs were at it again on Friday, putting away 12 more hitters via the strikeout. That now makes 35 across the past three games as they rank near the top in strikeouts this spring.

As good of a hitter as Rizzo has been, spring training hasn't been too kind in terms of average. There are many reasons why that may be, but his struggles in spring tend to linger into the regular season as it often takes him a month or so to get going.

His spring struggles continued to show their ugly head the first week of the season, but suddenly Rizzo appears locked into midseason form. It couldn't have come at a better time as the regular season is less than two weeks away. I am not saying he won't struggle the first month of the season or anything like that, but should he continue to hit like he has this past week it would be huge for the Cubs offense early on.