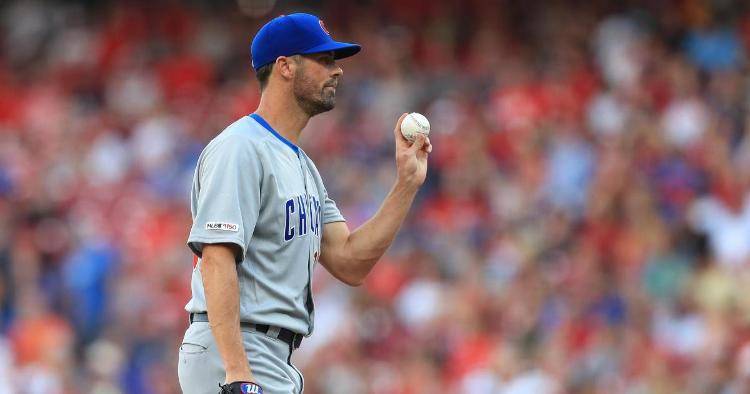 Cubs pitcher Cole Hamels suffered an injury to his left side that ended his start after just one inning. (Credit: Aaron Doster-USA TODAY Sports)

CINCINNATI — When Chicago Cubs (44-38) starting pitcher Cole Hamels took the mound to throw his warmup pitches prior to the bottom of the second on Friday, he made one uncomfortable warmup toss before walking to the dugout. Exiting his start with pain in his left side, Hamels pitched just one inning in the Cubs' series opener versus the Cinncinati Reds (37-42), leading to four different Cubs relievers combining to pitch the remaining frames. The Reds proceeded to take a 6-0 lead after that, and, despite manufacturing a 3-run seventh inning, the Cubs were unable to come back from that sizable deficit. Losing 6-3 at Great American Ball Park, the Cubs dropped to 2-5 in their seven contests against the Reds this season.

Prior to departing, Hamels gave up a run in the first inning. The Reds loaded the bases with one out and were able to plate a run on a fielder's choice. Cubs reliever Mike Montgomery, who has some starting experience under his belt, was called upon to replace Hamels in the bottom of the second, and an awful beginning for Montgomery foreshadowed what was to come. On his first pitch, Montgomery was taken deep on a solo home run hit to left by Phillip Ervin. Montgomery went on to give up five total runs on six hits and three walks in his 2 1/3 innings pitched. A 2-run double by Nick Senzel and an RBI base knock from Joey Votto put the Reds up 5-0 in the fourth. Later in the inning, after Montgomery was yanked, Jose Iglesias drove home Votto on a sacrifice fly to make the score 6-0.

This Nick Senzel kid really knows how to swing the bat! #BornToBaseball pic.twitter.com/c4og2OVNsI

Reds starter Sonny Gray was solid for most of his outing, as he fanned six in 6 1/3 innings of work. Jason Heyward, the hottest hitter in the Cubs' lineup during the month of June, ended Gray's start by making perfect contact on a changeup and sending it into the seats for a 2-run dinger in the top of the seventh. Heyward's 12 homer of the year, the 420-foot blast scored Javier Baez. Soon after Gray's departure, the Cubs' Addison Russell drove a triple into the left-field corner, which led to Russell scoring on sacrifice fly by Albert Almora Jr. that pulled the Cubs to within three runs.

Chicago's last auspicious offensive opportunity came in the top of the eighth, when they sported men on first and second with one out. However, consecutive groundouts resulted in the baserunners being stranded. The Cubs were outhit 11-6 by the Reds, with veteran Reds first baseman Joey Votto, who reached the 1,800-hit mark for his career on the night, going 4-for-4 with one walk in his five plate appearances. Due to the 6-3 defeat suffered in the opening contest of the 3-game set, the Cubs are now a woeful 2-8 in their last 10 games played away from home.

After going 4-for-4 tonight, Joey Votto is now 15-for-30 against the Cubs this season! ??#BornToBaseball pic.twitter.com/Owt2HH3rD5