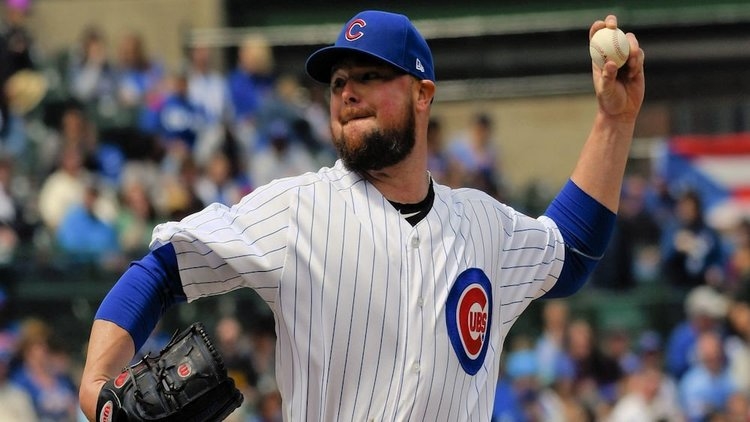 Can Jon Lester get hot down the stretch? (Matt Marton - USA Today Sports)

The Chicago Cubs currently sit four games behind the Cardinals in the NL Central, three and a half behind the Washington Nationals for the first Wild Card, tied with the Milwaukee Brewers for the second Wild Card spot and just two games ahead of the both the Philadelphia Phillies and New York Mets for that same Wild Card spot.

The Cubs squandered a few opportunities in both Milwaukee and San Diego to gain some ground on the Cardinals/Nationals or separate themselves from the Brewers.

Now, with 16 games left on the schedule against all NL Central teams, the Cubs need two wins to be Pecota’s projection, 11 to beat the over in Vegas and probably even more than that to win the division or overtake the Nationals for the top Wild Card spot.

However, should it come to a game 163 or Wild Card game, how does the rotation line up?

The final three games are on the road against St. Louis in what will most likely decide the division. The Cubs are currently slated to send Cole Hamels, Yu Darvish, and Jon Lester to the mound in that three-game set.

Hamels is battling some command issues since his injury back in July, but should he turn it around in his next couple starts the Cubs will have a lot of confidence handing their first-half ace the ball in a crucial divisional matchup against the Cards.

Darvish has made clear that he wants the ball down the stretch and proved why in San Diego. Darvish delivered six shutout innings and notched 14 strikeouts for the first time in a while. Darvish has the raw stuff that can give opposing hitters trouble, that and his new display of command should provide the cubs with no doubts in sending Darvish to the mound in the second to last game of the regular season.

Jon Lester has the best reputation a pitcher can have, thriving in big games. Some of Lester’s teammates and the media occasionally refer to him as “Big Game Jon.” So, who better to give the ball to in a game that will potentially have the division of playoff hopes on the line? Despite some of his recent struggles, Lester has a knack for battling and impressing in the game’s most significant moments of the season’s biggest games. His track record alone is enough for the Cubs to give Big Jon his shot against the Cardinals in game 162.

For the Cubs, hopefully, that isn’t the end of the road. If it is not, Kyle Hendricks is next to take the mound. Whether this be in a Game 163 to earn a Wild Card or if it is the Wild Card game, who better to give the ball to than the game seven of the World Series starter? Hendricks has struggled on the road a bit in his 2019 campaign but has started the biggest game of his career on the road and pitched well. Hendricks received an extension before this season for a reason, and he’ll look to prove why in what will most likely be the Cubs’ biggest game of the season to date. It could be game one, it could be game 163, it could be a winner take all game, but no matter what the Cubs would love the Professor to be the guy on the mound.

After the professor, Jose Quintana would be next up to pitch. This may be the Wild Card, it may be game one against the Dodgers or game two of the NLDS against the Braves - but because of his consistency in the second half of the year, the Cubs would be happy to give Q the ball.

In the playoffs, a team rarely uses five starters all as starters- mostly because every game is a must-win and you want your best pitcher out there as frequently as possible.

I would suppose, based on current performance, you would choose between Cole Hamels and Jon Lester to be the odd guy out of the rotation. My solution: keep Jon Lester in the rotation based on track record and his previous history in relief (game seven ring a bell?) and transition Cole Hamels into either a long relief or situational lefty role in the bullpen in the playoffs. This not only lengthens the bullpen but shortens the game in Joe Maddon’s quest to keep his job.

They say pitching wins championships, and down the stretch of the season the Cubs pitching is lining up to give them a chance to do so.