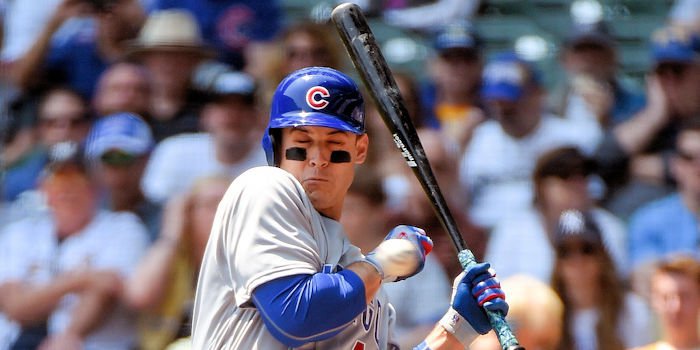 Roughly twelve hours after a crazy thirteen inning 2-1 Cubs triumph over the Brewers on early Thursday morning, the two teams were back competing in another National League Central showdown.

The Cubs (28-11) lost to the Brewers (18-23) 5-3 at Miller Park on Thursday afternoon as the Cubs are now 3-2 against them for the season and have dropped three of their last four games.

Dexter Fowler started the Cubs off impressively slamming a 93 mph 4-seam fastball for a solo homer (4th overall) to right field in the first inning against Brewers pitcher Junior Guerra. Fowler has now hit safely in 21 of his last 26 games.

In the second inning, catcher Miguel Montero clubbed a line drive single to score Jorge Soler and put the Cubs up 2-0.

A throwing error by Montero and a wild pitch by Jason Hammel led to the Brewers' first run of the game which made the score 2-1 in the bottom of the second inning.

Chris Carter smacked an 86 mph slider over the center field wall for his twelveth homer of the season to tie up the game at 2-2.

Kirk Nieuwenhuis homered on a line drive to right-center field to put the Brewers up 4-2 in the bottom of the sixth inning. Hammel has now given up three homers on the season with two of the three in today's contest.

Montero knocked his first triple since 2012 and seventh of his career in the top of the seventh inning and scored later on a wild pitch to make the score 4-3 Brewers.

The Cubs tried to ignite a rally in the 8th winning with two outs with an Anthony Rizzo walk and a Ben Zobrist double to put Rizzo at third base. However, outfielder Jorge Soler struck out on a breaking ball pitch to finish the inning. He is batting .068 with two strikes on the season.

Hernan Perez slapped an RBI single that scored Scooter Gennett to make it 5-3 Brewers in the bottom of the eight inning.

Cubs batters were not viewing the ball well as they struck out thirteen times during the game as every hitter with at least one plate appearance had a punch out.

Addison Russell and Miguel Montero led off the ninth inning with walks as Kyle Hendricks came in to pinch-run for Montero. However, Javier Baez struck out; Fowler hit a deep fly ball that barely missed being a home run on his 11th pitch of the at-bat, and Jason Heyward struck out to end the game.