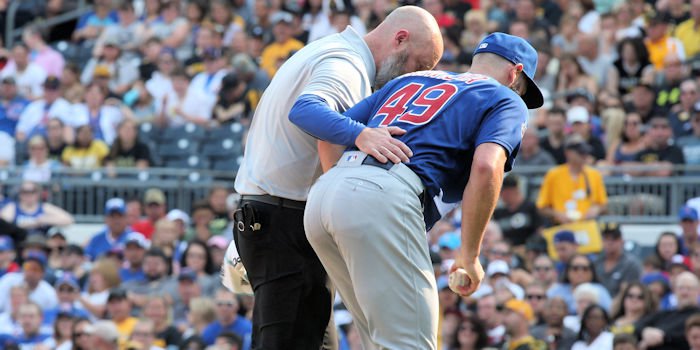 CHICAGO -- The storyline of the game is another injury to one of the Chicago Cubs superstars with Jake Arrieta limping off the field in the third inning with an apparent hamstring injury.

Arrieta grabbed the back of his right leg near his hamstring after the pitch that he was hurt on. It appears to be a hamstring injury or cramping but no official word yet from Cubs officials.

The veteran righty tried to throw a practice pitch to see if he could continue in the game but stopped quickly without even throwing the ball. He walked off in severe pain with the trainers and manager Joe Maddon as his day ended after 2 1/3 innings and giving up three runs including two homers by Josh Bell and Max Moroff respectively.

He had a 1.59 ERA in nine starts since the All-Star break which is lowest in the majors and was named National League Pitcher of the Month for August. In 37.1 innings in August, he was 4-1 with five quality starts posting a 1.21 ERA with 37 strikeouts. He has been a huge part of the Cubs turnaround in the second half of the season.

It was Arrieta's fourth National League Pitcher of the Month award in his career. For the season, Arrieta has a 14-8 record with a 3.36 ERA with 153 strikeouts and 1.18 WHIP.

Jake injured. Throws another pitch to test things out, NOT GOOD! pic.twitter.com/Cu6E5LfHLh

There was an actual game that was being played after the Arrieta injury news as the Pirates jumped out to a 4-0 lead with a RBI single by Josh Bell in the bottom of the fifth inning. The Pirates added an insurance run in the seventh inning with a RBI double by Max Moroff to score Starling Marte to put the Pirates up a resounding 5-0.

In the ninth inning, the Buckaroos scored six runs to make the score 12-0 to completely embarrass the Cubs. However, in the final frame, outfielder Leonys Martin made his Cubs debut taking one for the team as a pitcher giving up three hits including a two-run homer by David Freese. According to ESPN Stats and Info, the last Cubs loss by twelve or more runs was July 5, 2014. It was also the largest shutout win by the Pirates since 1975.

The North Siders will try to get revenge on Tuesday at 7:05 p.m. ET at PNC Park.