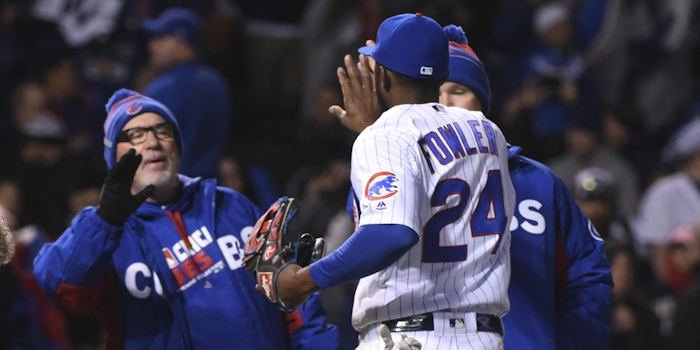 The night after securing their best record through the first eight games of the season since 1985, the Chicago Cubs (8-1) tied the previous franchise best nine-game start held by the 1969 Cubs by crushing the Cincinnati Reds (5-4) 8-1.

Ernie and Ron would be proud.

Catalyzed by a gem of an outing by starting pitcher Jason Hammel, the Cubs’ pitching staff only gave up six hits on the night. The star of the game, however, was third baseman Kris Bryant, who, a night after hitting his first home run of the young season, hit a line drive dinger in the second inning to put the Cubs on the board. From there, the reigning National League Rookie of the Year put on perhaps his best plate performance thus far in 2016, going two for three with an RBI and two runs scored.

Though Bryant gave the Cubs a lead they would never relinquish, Hammel made his presence felt at the plate, too, bringing shortstop Addison Russell home with a double in the bottom of the fifth. Hammel would later score following a sacrifice fly by second baseman Ben Zobrist.

On the mound, Hammel was stellar, pitching six innings of four-hit ball and looking like the Jason Hammel of old. Second-year Reds starter Raisel Iglesias, on the other hand, was not so fortunate, receiving no run support and taking the loss after giving up three runs in five innings.

The eighth inning, however, was the proverbial nail in the coffin for the Reds, as the Cubs shellacked reliever J.J. Hoover for five runs, four of them earned, and put the game out of reach. The five-run eighth saw the Cubs progress through the entire batting order and featured outfielder Jorge Soler, who pinch hit that inning, scoring on a bases-loaded walk.

The Cubs were unable to secure a shutout by giving up a meaningless run in the top of the ninth, but they did wrap up an impressive sweep of a divisional rival. Hammel earned the win, his first of the season, as the Cubs batters provided him with much more run support than they did in a loss to the Arizona Diamondbacks last week in which Hammel garnered a no decision. Boasting an MLB-best 8-1 record, the Cubs also boast, according to ESPN, the third-highest run differential through the first nine games of the season in the modern era at +43.

Compiling at least five runs in all three games of their home-opening series against the Reds, the Cubs appear primed to live up to the abundance of preseason hype that surrounded the team. Despite losing star slugger Kyle Schwarber in the third game of the season, the Cubs have remained deadly at the plate. As well as being the North Siders’ first full series of 2016 without Schwarber’s services, the three-game affair saw Bryant and Russell come to life offensively. The Cubs are definitely rolling on all cylinders to start off the season, and they will look to continue streaking Friday afternoon when they face the Colorado Rockies at Wrigley Field.