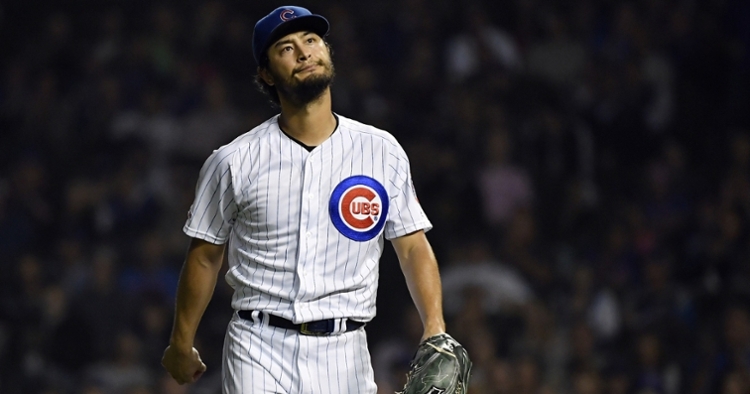 Despite Yu Darvish's dominance on the mound, the Chicago Cubs came up short to the Cincinnati Reds. (Credit: Quinn Harris-USA TODAY Sports)

CHICAGO — Spoiling an otherwise historically great start, Chicago Cubs (82-69) starting pitcher Yu Darvish gave up three runs to the Cincinnati Reds (71-81) in the opening inning on Tuesday night. Darvish recovered following the rocky first frame and went on to set a franchise record for consecutive strikeouts. However, outside of a couple of 2-out extra-base hits from Kyle Schwarber, the Cubs did not experience much success at the plate, and the North Siders ultimate fell 4-2 at Wrigley Field, ending their 5-game winning streak.

Darvish was taken for three runs via an RBI double by Joey Votto and a 2-run home run by Aristides Aquino in the top of the first. The right-hander came into his own after that, though, and struck out the side in both the third and fourth innings as part of a stretch of eight straight strikeouts, which marked a new Cubs record. Darvish, who fanned 13 batters in all during his 7-inning outing, finished two strikeouts shy of tying the legendary Tom Seaver's all-time record of 10 strikeouts in a row.

At the plate, both of the Cubs' runs were scored when Schwarber drove home Nicholas Castellanos with two outs. In the bottom of the first, Schwarber hammered a 2-out double off the center-field wall, thus plating Castellanos from first base. Later, in the bottom of the third, Schwarber swatted a triple into the right-field corner that also brought Castellanos home from first base. Schwarber hit a 3-run jack that sparked the Cubs in their 8-2 victory in Monday's series opener, and he continue to man the charge for the Chicago offense by going 3-for-4 on Tuesday.

The Cubs tabbed a modest five hits, and Schwarber was responsible for over half of them. Although he was understandably overshadowed by Darvish, Reds starter Sonny Gray fared well in his 6 2/3 innings pitched, in which he struck out nine. Reds reliever Michael Lorenzen was clutch out of the bullpen, as he tossed 1 1/3 innings of scoreless ball and recorded a pivotal inning-ending strikeout with runners on the corners in the bottom of the seventh. Additionally, the jack-of-all-trades played center field in the bottom of the ninth and caught a line drive for the first out.

Speaking of catching a line drive for the first out, Cubs third baseman Kris Bryant did just that in the top of the fifth. The Reds' Jose Peraza put a stop to Darvish's strikeout streak by slapping a liner toward Bryant, who was able to leap up and glove the hard-hit ball for a superb web gem. However, Gray followed that up with a base knock and eventually came around to score, with a 2-out single by Eugenio Suarez pushing Gray across the dish, thereby leading to the 4-2 final tally.

As unfair as it may seem, Darvish was handed the losing decision after giving up four runs on six hits and one walk. While the Cubs and the Reds will do battle once more in Wednesday's series finale, the Reds assured themselves of winning the season series versus the Cubs by way of Tuesday's victory, as Cincinnati has won 10 of its 18 contests against Chicago this year. On top of having their 5-game winning streak halted, the Cubs had their 4-year winning streak in the season series with the Reds put to a stop, as well.