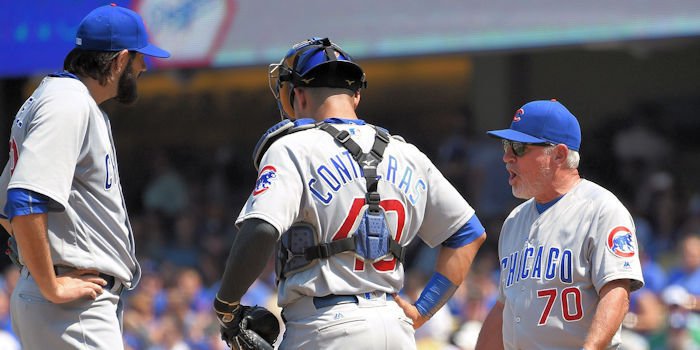 LOS ANGELES -- The Los Angeles Dodgers got revenge from Friday night's game as they defeated the Chicago Cubs 3-2 on a sunny 73 degree Saturday afternoon in front of 49,522 fans at Dodger Stadium.

Cubs first baseman Anthony Rizzo started the Cubs attack off with a RBI single to right field to score Dexter Fowler to put the Cubs up 1-0 in the first inning. It was Rizzo's 89th RBI of the season. However, the lead was short-lived with a Corey Seeger solo homer to tie the game at the bottom of the first inning.

In the second inning, the Dodgers had two RBI singles up the middle by Chase Utley and Justin Turner to make it 3-1 Dodgers.

Skipper Joe Maddon yanked Jason Hammel quickly after only 2.1 innings and 39 pitches with him giving up five hits and the three runs. Hammel was visibly upset with Maddon's decision as the veteran pitcher had his hands on his hips in disbelief.

“I didn’t even pitch today,” Hammel said to reporters after the game. “I barely threw even 40 pitches, so it’s a side day today. ... Two balls hit hard. Other than that, I feel like their hits found holes.”

“He was not happy with me taking him out that early,” Maddon said to reporters after the game. “I can understand why, because it’s happened in the past. I didn’t see the game straightening out.”

Jason Heyward had a RBI single to left field off of reliever Pedro Baez that scored catcher Willson Contreras to put the Cubs down only one at 3-2 in the seventh inning. The Cubs had a chance for the lead with two men on-base but Anthony Rizzo grounded out to the first baseman to end the inning.

Reliever Willie Bloomquist struck out the side in the ninth inning for the save.

Veteran lefty Jon Lester will take the mound against righty Brock Steward on Sunday at 3:10 p.m. CT. After Sunday's game against the Dodgers, the Cubs will have a second "onesie" trip, in which players will be allowed to wear their pajamas on the flight from Los Angeles to Chicago.

He loves getting here early. Thanks for the autograph Spencer Patton! #GoCubsGo ?? pic.twitter.com/yYu3dpRmjv