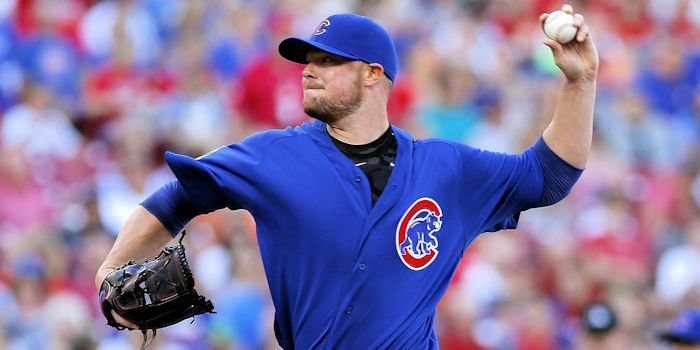 The Chicago Cubs were solid on Saturday afternoon as they defeated the Miami Marlins 5-3 at Marlins Park as the Northsiders have won two out of three in the four-game series in Miami.

Despite leadoff tablesetter Anthony Rizzo getting a rare day off, the Cubs scored in the first inning with a RBI single by rookie Ian Happ that scored Jon Jay. The Marlins came right back with a powerful three-run homer by J.T. Realmuto to put the Marlins up 3-1.

The star of the game offensively for the Cubs was Javy Baez with a RBI single in the fourth inning to put the Cubs up 2-1. Outfielder Albert Almora Jr. added to the Cubs lead with his 9th double of the season to make it 3-3.

In the sixth inning, Baez came up huge again with a two-run RBI double that scored Russell and Happ to put the Cubs up for good 5-3.

Cubs ace Jon Lester recorded his fifth win of the season going seven strong inning giving up only four hits, three runs, a walk, and four strikeouts. His season ERA is now down to 3.83 and it was his first win of his career against the Marlins.

The largest ovation of the game came when Florida native Anthony Rizzo came in to pinch hit in the ninth inning.

Standouts Carl Edwards Jr. and Wade Davis came in the final two innings to shut down the Marlins attack as Davis recorded his 15th save of the season.

The Cubs and the Marlins will finish up their series on Sunday at 1:20 pm CDT.