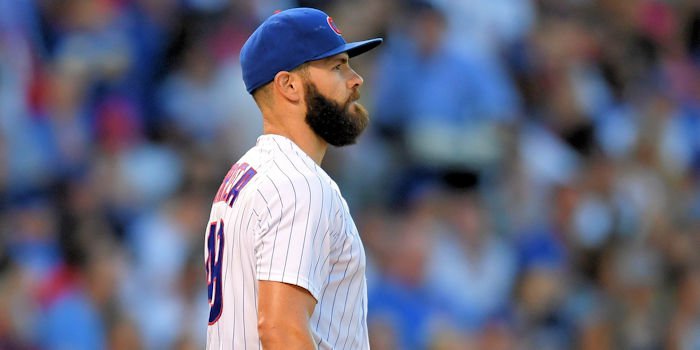 CHICAGO – In a game that produced a mere 11 cumulative hits, the Chicago Cubs came up short against the Pittsburgh Pirates on Saturday night. More specifically, Chicago starting pitcher Jake Arrieta came up a short in his duel with Pittsburgh starter Ivan Nova, effectively resulting in the Cubs losing at home to the Pirates by a final score of 4-2. Earning a commanding win over the Cubs for the second time this season, Nova was dominant throughout, making a mockery of the Chicago batting order in his six-plus innings pitched. Although he gave up two home runs to Arrieta's one, Nova avoided allowing his shortcomings to get to him on the evening, which is something that cannot be said about Arrieta, as the Chicago right-hander lost the game for the Cubs and fell to 8-7 overall.

Arrieta and Nova were equally solid in the early goings of the game, with both hurlers pitching three scoreless innings to start. The lone scoring threat for either team in that span came during the top of the second when Arrieta walked one batter and hit the next, eventually resulting in the Pirates sporting runners on second and third with two outs later in the inning. However, Arrieta buckled down and forced a clutch inning-ending grounder right back to the mound that enabled him to escape the jam.

Arrieta would not be so lucky after hitting a batter in the fourth frame, however, as the Bucs tacked on their first run, thanks in large part to costly mistakes by the Chicago battery of Arrieta and catcher Willson Contreras. Pittsburgh first baseman Josh Bell, who has played quite well against the Cubs this season, started the inning off with a double in the gap between right and center. Afterward, Arrieta became a bit erratic on the hill, hitting a batter and throwing a subpar pitch that was scored as a passed ball by Contreras. As a result, the Pirates found themselves in a very auspicious situation of boasting men on second and third with zero outs to show for it.

Ultimately, Chicago escaped relatively unscathed, as one run was all that Pittsburgh could muster in the fourth. Catcher Francisco Cervelli grounded out to third with one out to draw home Bell, but, following an intentional walk to load the bases and create a force-out opportunity for the Cubs, another Pirates groundout ensued, leaving three runners stranded.

Failing to come up with more runs in the top of the fourth came back to bite the Buccos in the bottom half of the inning, as the Cubs finally experienced some success at the plate against Nova. Taking a page out of the Chicago starting pitching staff's book from this season, Nova put a damper on his outing by giving up two solo home runs. Going back to back in the fourth, Cubs outfielders Ian Happ and Kyle Schwarber hit homers in consecutive at-bats to put Chicago on top 2-1.

Playing in just his third game back in the starting lineup since being called up from the minors earlier this week, Schwarber tasted prosperity at the big-league level for the first time in nearly a month, finishing 2-3 with one walk. In fact, Schwarber, who now has 13 dingers on the year, was the lone Chicago batter to accrue multiple hits in Saturday's contest. As for Happ, he was 1-3 on the night, and he, too, presently boasts 13 homers this season.

Kyle Schwarber CRUSHES a home run to give the @Cubs the lead & make the bullpen dance. #PITvsCHC pic.twitter.com/QPCpYfleE3

The solo shots proved to be Nova's only blemishes of the evening, as he gave up a meager three hits and one walk in his 6.2 innings on the bump, collecting six strikeouts in the process. Arrieta, on the other hand, was unable to recover from his shaky fourth inning, proceeding to come undone in the sixth. Despite going three up, three down in the fifth, Arrieta appeared rattled from the get-go in the sixth. Interestingly enough, Bell was the spark plug for the Pirates yet again in that inning, leading off with a ground-rule double to straight-away center field. Needless to say, Bell prolonged his stellar play against the Cubs in Saturday's affair; he finished 3-4 with two runs to his name.

Two at-bats after Bell's wall-clearing double, Pirates right fielder Gregory Polanco garnered a wall-clearing hit of a different variety, smacking a two-run home run into the bleachers beyond center field, the 14th long ball given up by Arrieta this year. Pittsburgh did not let up after gaining a 3-2 advantage, earning two additional hits thereafter off of Arrieta. After allowing a single off the bat of Cervelli in the at-bat following Polanco's bomb, Arrieta then gave up a double toward the wall in center to Pirates shortstop Jordy Mercer. The RBI double scored Cervelli from first and provided the Pirates with a two-run lead that they would not relinquish.

From the middle of the sixth onward, offense was hard to come by for either club, as both bullpens fared well. The Cubs had one more promising opportunity to increase their run total after pinch hitter Tommy La Stella swatted a double to left with one out in the eighth. An ensuing grounder advanced La Stella to third, and, after an intentional walk of third baseman Kris Bryant, Cubs first baseman Anthony Rizzo failed to produce with runners on the corners and two outs, hitting into an inning-ending groundout to short.

Falling 4-2, the Cubs were essentially done in by Arrieta's lackluster performance. Jake was charged with four runs, three of them earned, in the loss, giving up six hits and walking two in his 5.2 innings pitched. With one game remaining before a much-needed All-Star break for the Chicago Cubs, the North Siders stand at a disappointing 43-44 overall. They will look to break even at the conclusion of the regular season's first half tomorrow afternoon in the rubber match of their three-game series against the Pittsburgh Pirates (41-47). The contest is set for 12:10 PM CST on Sunday at the friendly confines of Wrigley Field.