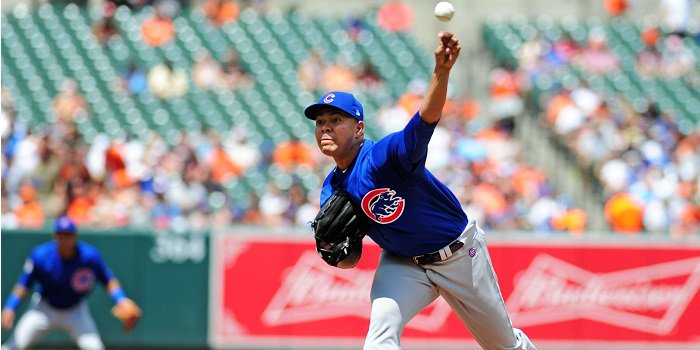 Jose Quintana could prove to be the perfect catalyst for sparking a resurgent Cubs team in the second half of the season. Photo Credit: Evan Habeeb-USA TODAY Sports

BALTIMORE – The Chicago Cubs were outstanding at the plate on Sunday, capping off a dominant three-game sweep of the Baltimore Orioles that saw the North Siders outscore the O's 27-11 at Camden Yards. However, hitting was merely an afterthought this afternoon and understandably so. Yes, with recently-acquired starter Jose Quintana making his Cubs debut, pitching was the story of the game.

Perhaps inspired to perform at the highest possible level in what was definitely the most talked about start of his career, Quintana did not shy away from the big moment, producing his most impressive outing of the season. Collecting a season-high 12 strikeouts as part of a marvelous seven-inning showing, Quintana quickly revealed to Cubs fans what made him such a valuable commodity in the eyes of Theo Epstein. Allowing only three hits and walking no one, Quintana pitched seven shutout innings that allowed the Cubs to coast to a shutout victory, with Chicago winning 8-0 to earn an interleague sweep of Baltimore.

While the Cubs were positively anticipating their starting pitcher's appearance this afternoon, the Orioles were likely dreading theirs, as Baltimore's Ubaldo Jimenez has been reeling as of late, sporting a woeful 6.67 ERA entering today's game. Unfortunately for the O's, Ubaldo's woes persisted, and it allowed the Cubs to take a commanding 4-0 lead in the second inning that they never relinquished.

Jiminez was taken apart to start the second, giving up three consecutive doubles in the inning's first three at-bats. Catcher Willson Contreras and designated hitter Kyle Schwarber accrued the first two, and center fielder Ian Happ, with one of his two hits in the game, made it a trifecta of doubles by slapping one to center that scored both runners. Chicago right fielder Jason Heyward then upped the Cubs' lead to three runs by hitting a single to shallow right that brought home Happ. Heyward proceeded to pull off his second steal of the season, which indirectly enabled him to score on a single by second baseman Ben Zobrist later in the inning.

Providing plenty of breathing room for Quintana to work with after the conclusion of the top of the second, the Cubs cruised to victory, as Baltimore was impotent at the dish for the second straight game. As for Chicago, it never let up on the offensive end, making Jimenez's life miserable during his ill-fated 3.2 innings spent toeing the rubber. Racking up 11 hits and six runs off of the veteran right-hander, the Cubs handed Jimenez (4-5) a loss on a silver platter, which could very well have sealed his fate of being relegated to the bullpen for the second year in a row.

Cubs third baseman Kris Bryant put a bow on Jimenez's troubled outing with a two-run home run in the fourth that scored left fielder Jon Jay, who led off the inning with a single. The moonshot to left-center marked Bryant's 19th long ball of the season and increased his RBI total to 40. Bryant was one of several Chicago hitters to have himself quite a day at the plate, with the reigning MVP going 3-4 with one walk. Contreras was another North Sider to fare well with the bat, as he went 4-5, helping the Cubs outhit the O's 15-3 in the first four-hit performance of the young backstop's career.

That got out fast!

And, although he did not experience the level of success that the two aforementioned Cubs sluggers experienced, Chicago first baseman Anthony Rizzo contributed to the blowout victory in a major way, as well, by taking submarine-pitching reliever Darren O'Day deep for his lone hit of the contest. A two-run bomb in the top of the ninth, Rizzo's round-tripper scored Bryant, who had singled in the previous at-bat, and put the Cubs on top by a gaudy score of 8-0.

With the 8-0 victory over the Orioles (42-49), the Cubs (46-45) pulled off a much-needed sweep to right the ship following a shaky stretch in the weeks leading up to the All-Star break. Even more importantly, the win kicked off Quintana's career suiting up for the club from the northern side of Chicago in grand fashion, providing the 28-year-old lefty with a convincing victory in his introductory stint with the Cubs.

Currently 4.5 games out of first place in the NL Central, the Cubs will look to carry forth with their string of impressive performances in Charm City as they return to National League play with aspirations for a much-improved corps of starting pitchers for the second half of the season. Although it would be premature to guarantee as much, Quintana looked the part of the saving grace of the Chicago rotation on Sunday, and, better yet, he could very well prove to be the saving grace for the Cubs' tenuous playoff hopes.