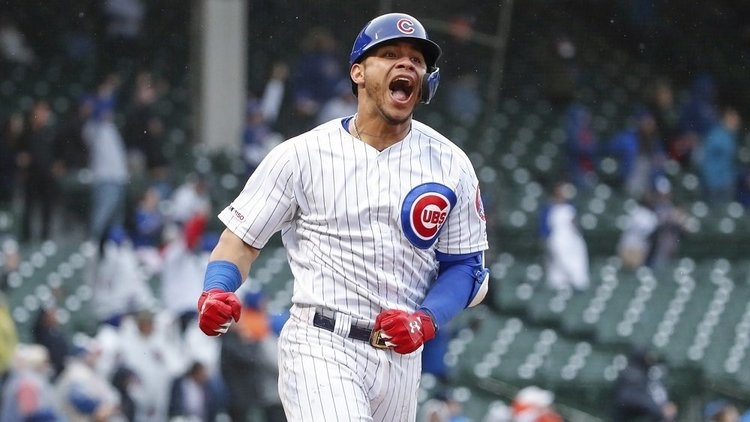 CHICAGO, Ill. — Even in baseball, there are at least two ways to look at just about everything. Saturday's 15-inning marathon between the Chicago Cubs (23-14) and the Milwaukee Brewers (24-17) is a prime example. On the one hand, the Cubs squandered multiple scoring opportunities, went 0-for-9 with runners in scoring position and stranded 14 men on base. On the flip side, the Cubs came through in the clutch and won on a walk-off home run for the third time in their last five games. A mammoth 424-foot moonshot hit by catcher Willson Contreras in the bottom of the 15th brought the grueling contest to an end and provided the Cubs with a 2-1 victory over the rival Brewers at Wrigley Field.

While the ending to the game, which featured light rainfall throughout the majority of it, was thrilling, most of the matchup consisted of poor situational hitting, with neither team accruing a single hit with a runner in scoring position over the course of the entire 15-inning game. Furthermore, an MLB record-tying 10 double plays were turned in the contest, as the Cubs tallied six double plays on defense to finish one double play of the single-team record of seven, which they matched in a game last August. Cubs starter Cole Hamels dominated in seven innings pitched, giving up just one run on three hits and three walks and striking out five. Brewers starter Zach Davies pitched for 6 1/3 innings and also gave up one run while fanning five.

The star on the mound, though, was Cubs reliever Tyler Chatwood, who used his experience pitching in the starting rotation last year to his advantage in a scoreless 4-inning stint in extra innings. Interestingly enough, the Cubs competed in another 15-inning duel a few weeks ago, and Chatwood produced a similar extra-innings performance. The Brewers mustered just four total hits in the loss and struck out 17 times. As for the Cubs, who struck out on 13 occasions, they garnered nine hits and 10 walks but faltered with men on base.

On the first pitch faced by a Cub on the afternoon, right fielder Jason Heyward smacked a leadoff triple in the bottom of the first. The 3-bagger served as a facade for what was to come, however, as the Cubs were unable to score Heyward, who was gunned down at home on an ensuing grounder, and did not experience much success at the plate the rest of the way. The Brewers were actually the first to strike, with second baseman Hernan Perez hitting a 390-foot solo shot to left-center in the fifth.

A 2-out rally that included a superb slide resulted in the Cubs tying the game at 1-1 in the bottom of the fifth. David Bote hustled down the first-base line for an infield single with two outs, and he then hustled all the way around the basepaths on an ensuing double by Albert Almora Jr. After Bote was sent home, Perez fired a perfect throw to the plate, but Bote was able to avoid the outstretched mitt of catcher Yasmani Grandal with an unorthodox hook slide of sorts that saw him barely touch the backside of the plate with his right hand.

From there, a war of attrition, featuring several double plays and strikeouts, commenced until the Cubs loaded the bases with two outs in the 11th. Almora had a chance to win it, but he grounded out to end the inning. In the 13th, Baez led off with a double to deep center and reached third base after tagging up on a flyout soon afterward. The Brewers then issued back-to-back intentional walks to bring Chatwood to the plate. Chatwood, who is a solid hitter for a pitcher, tallied the winning hit in the aforementioned 15-inning game from a few weeks back, but he struck out swinging this time around. Addison Russell came up to bat after Chatwood and suffered the same fate by striking out swinging with the bases juiced to end the inning.

Having seen enough, Contreras took matters into his own hands and, with one out in the 15th, took Brewers reliever Burch Smith deep for a walk-off blast to left. Nearly sailing out onto Waveland Avenue, the moonshot marked Contreras' 10th dinger of the season and the Cubs' third walk-off dinger of the past five days. The Cubs have now hit three walk-off homers in a month for the first time since April of 1961. As for the Brewers, the loss brought an end to their 7-game winning streak. Overall, Contreras went 2-for-7 at the plate, and Chatwood was named the winning pitcher in the 2-1 Chicago triumph, which set up a rubber match in the series finale of the 3-game set on Sunday night.