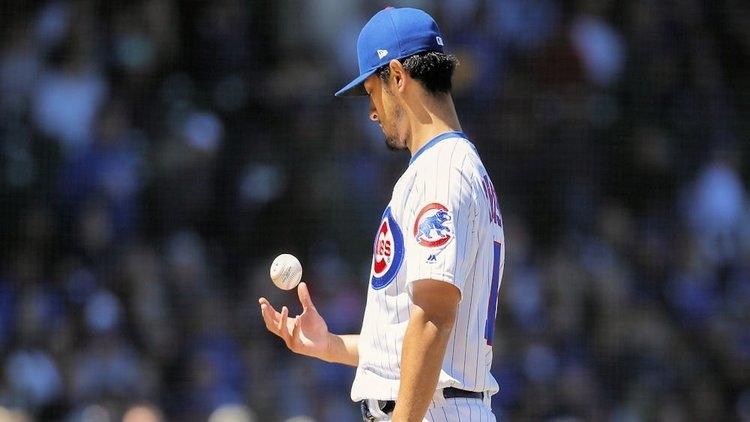 CHICAGO, Ill. — Any momentum that the Chicago Cubs' starting pitchers had entering the weekend was quickly lost in the top of the first in the matchup between the Cubs (9-10) and the Arizona Diamondbacks (11-10). Over the course of the week leading up to the game, Cubs starting pitching tallied an ERA south of 1.00, with dominance on the hill helping the Cubs put together a shutout streak of over 30 innings during that stretch. However, starter Yu Darvish, who garnered his first winning decision in his previous start, struggled out of the gate on Saturday and was taken for three runs total in the North Siders' 6-0 shutout loss to the Snakes.

Chicago got off to an auspicious start, with left fielder Kyle Schwarber throwing out D-backs leadoff man Jarrod Dyson when he attempted to stretch a game-opening single into a double. From there, the wheels fell off for Darvish, as the right-hander gave up back-to-back solo home runs to Eduardo Escobar and David Peralta, respectively, to place the Cubs into a 2-0 hole.

Darvish struggled with control issues early on his outing and nearly beaned Adam Jones in the head with a pitch that was well off the mark in the top of the first. He issued consecutive walks to start the second frame, with Dyson bringing a run home later in the inning on a sacrifice fly, but Darvish was then able to compose himself and finish off his 5-inning start on a high note. The veteran hurler notched seven strikeouts on the afternoon.

Darvish's stint ended after 88 pitches, paving the way for a disastrous sixth inning with Cubs reliever Allen Webster on the bump. A drop suffered by catcher Willson Contreras on an easy throw home to set up a potential tag out enabled a run to score and resulted in Contreras being charged with an error. Arizona catcher John Ryan Murphy then put his team up 6-0 with a lined 2-run shot over the wall in right.

You can throw it back, but that won't take it off the scoreboard. #RattleOn pic.twitter.com/gnbKhwCnYX

Offensively, the Cubs did not have much success against Diamondbacks ace Zack Greinke, who was taken for just three hits in a scoreless 6-inning appearance. Chicago mustered only four hits in all and went 0-for-4 with runners in scoring position. The 6-0 shutout defeat brought an end to a 4-game winning streak for the Cubbies and set up a rubber match at Wrigley Field on Easter Sunday.