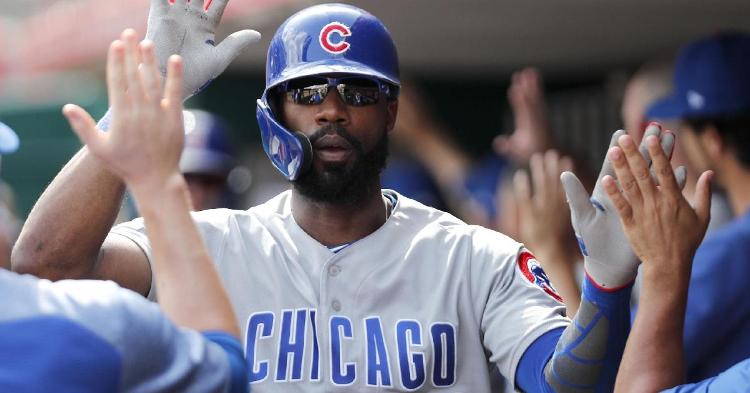 Jason Heyward cited a "sharp pain" in his left knee as the reason behind him being unable to play on Wednesday. (Credit: David Kohl-USA TODAY Sports)

PHILADELPHIA — Chicago Cubs outfielder Jason Heyward was scratched from the lineup for Wednesday's contest between the Cubs and the Philadelphia Phillies at Citizens Bank Park. Heyward is currently battling pain in his left knee, and he talked about it with Gordon Wittenmyer of the Chicago Sun-Times on Wednesday afternoon.

While the Cubs officially designated the injury as inflammation, Heyward described it as a "sharp pain" that began once his knee "kind of locked up" when he got out of bed in the middle of the night. Heyward attempted to grin and bear it, but the pain did not subside enough during batting practice for the Cubs to feel comfortable playing him.

"Right after he hit," Cubs manager Joe Maddon said about Heyward after batting practice, "he reported that it was still there but not awful. We'll play it day by day, but what I'm hearing is it's nothing that we should be concerned about right now."

Heyward was confident that the recovery from the ailment would be relatively speedy and ruled out a stint on the injured list. Maddon did say that Heyward might be rested again on Thursday in order to ensure that the injury is given enough time to heal. While Heyward told the press on the afternoon that his left knee felt much better than he expected it to following his batting-cage session, he agreed with Maddon that attempting to play through it would be unwise.

"Rest will help it," said Heyward. "It's not going to be an IL thing. Sometimes you need to stop to not make something worse."