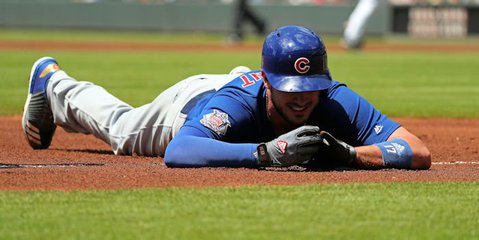 The Cubs announced that Bryant has a sprain in his left pinkie after the game. The X-rays were negative on any type of fracture and called the injury day-to-day.

However, it is reported on Friday morning by MLB insider Carrie Muskat that Bryant may miss the entire rivalry series against the St. Louis Cardinals as they take precautious measures with the hand injury.

Maddon told reporters before the game that he is out for Saturday and doubtful for Sunday's game because he can't grip the bat yet with his injured finger. The team is hoping that he will be ready to play on Sunday. Nothing is 100% certain at this point, but all signs point to the Cubs giving Bryant a few days off to rehab and heal his pinkie finger.