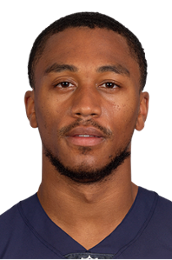 Enters his sixth NFL season and his first with the Bears in 2021
Has played in 44 games with 20 starts, catching 91 passes for 1,092 yards and four touchdowns; also owns 14 punt and kickoff returns, one of which he returned 103 yards for a touchdown in 2017 as a member of the Panthers

Played in all 16 games with 14 starts, recording career bests with 47 catches for 604 yards (12.9 avg) and one touchdown
Played a reserve role, making six receptions – including his first as a Patriot - on nine targets for 72 yards in a loss at Seattle; Byrd's 72 yards receiving was the third most of his career
Started for the second time this season at wide receiver, making three catches for 27 yards, including a 23-yard catch and run that helped set up a second-quarter touchdown as part of a Week 3 win vs. Las Vegas
Started at wide receiver, racked up five catches for 80 yards, highlighted by 25-yard grab that put the Patriots on the Chiefs 12-yard line in the third quarter of a Week 4 loss at Kansas City
Started at wide receiver in a Week 6 loss vs Denver; Made four catches for 38 yards, including a 19-yard reception in the fourth quarter that put NE on the Denver 46
Posted his first 100-yard receiving game in a Week 11 loss at Houston; finished with 132 yards on six receptions; 42 of those yards came on his first touchdown with the Patriots, which at the time cut the Texans lead to 21-17 in the third quarter

Entered the 2018 season as the team primary punt returner and played in eight games before suffering an injury and finishing the year on injured reserve
Returned 11 punts for 104 yards and two kickoffs for 34 yards; also caught one pass for 8 yards
Inactive for three games and missed the final five games of the season on injured reserve after suffering an injury against Seattle
Returned three punts for 47 yards including a 30-yarder to the Cowboys 35-yard line which set up a touchdown drive vs. Dallas

Was limited to eight games with three starts due to an injury in the middle of the season; posted 10 receptions for 105 yards and two touchdowns and rushed once for 12 yards; also returned seven kickoffs for 229 yards and one touchdown and one punt return for 9 yards
Spent Weeks 5-12 on injured reserve (arm), returned to the active roster in Week 13, went back to injured reserve for a leg injury in Week 17, forcing him to miss the postseason
Made his first career start vs. Minnesota and posted five receptions for 37 yards
Caught three passes for 25 yards and two touchdowns vs. Green Bay
Caught a career-long 31-yard reception and returned a kickoff for a franchise record 103 yards for a touchdown vs. Tampa Bay