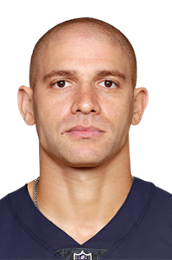 Five-time Pro Bowler (2011, 2013, 2014, 2016, 2017)
Ranks No. 2 among NFL tight ends since 2010 with 8,339 receiving yards, 699 receptions and 82 receiving TDs; Rob Gronkowski is first with 86
Ranks No. 4 in NFL history among tight ends with his 82 career TD catches and is tied for second in the league in TD receptions among all players since entering the NFL in 2010; also ranks fourth among NFL tight ends with five receiving touchdowns in the postseason
Needs one more receptions to become the sixth tight end to hit 700 for his career; he would join the company of Hall of Fame tight ends Tony Gonzalez and Antonio Gates as the only three TE's to eclipse over 700 career receptions, 8,000 yards and score 75 TDs
Has 17 career multi-TD games, which is tied for third all-time alongside Rob Gronkowski, and trails only Antonio Gates (21) and Tony Gonzalez (18)
2013 Associated Press, PFWA and Sporting News All-Pro after leading all NFL tight ends with 86 catches, 1,215 yards and 16 TDs
Led all NFL tight ends in receptions in 2011 (99) and 2013 (86)
Led all NFL tight ends with 14.2 yards per catch in 2016 as a member of the Seattle Seahawks
Is the only tight end in league history to have two seasons with 1,200-plus receiving yards and 10-plus receiving TDs (2011, 2013) and is the only TE to register four consecutive seasons with 85-plus catches (2011-14)
Has four seasons with 10-plus TDs, tied for No. 2 (Antonio Gates) in league annals among TEs behind only Rob Gronkowski (5)
Has recorded 67 career TD receptions in the red zone, which ranks No. 1 in the league since 2010; his 22 red zone TDs since 2017 are the most by a TE in that span
Has posted 18 games with 100-plus receiving yards in his career
Joins Jared Cook (four teams) and Benjamin Watson (three) as the only TEs in league history to register a 100-yard receiving game with three or more franchises
Has registered 10-plus catches in a game five times in his career
Holds career records among tight ends for receptions, receiving yards and receiving TDs for both the Saints (386 catches for 4,752 yards and 51 TDs) and the Seahawks (170 catches for 2,048 yards and 18 TDs)
Registered 1,310 receiving yards with the Saints in 2011, the second most in NFL history by a TE to that point behind only Gronkowski (1,327 in 2011), and posted 16 TD catches for New Orleans in 2013, No. 2 in a season among TEs behind only Gronkowski (17 in 2011)
Led the Saints in receptions in four consecutive seasons (2011-14)
Has played 15+ games in nine of his 10 years in the league, including seven seasons playing all 16 games
Has been ranked among the NFL's Top 100 players four times (2012, 2014, 2015, 2018)

Chicago Bears Walter Payton Man of the Year nominee
Played in all 16 games with 15 starts; led the team with eight receiving touchdowns and was third among all pass catchers with 50 receptions for 456 yards
Ranked second in the NFC among tight ends with his eight TD catches and tied for fourth among all tight ends
Caught four passes for a season-high 69 yards and two touchdowns -- one a 5-yarder and the other a 22-yarder -- in the Week 16 win at Jacksonville; it marked his 17th career multi-touchdown catch game
Caught six passes for 60 yards, including two touchdown grabs in the red zone, in the Week 3 win at the Falcons
Tied his season high with six catches for 55 yards and a score in Week 9 at the Titans
Caught three passes for 25 yards, including a two-yard touchdown grab to help spark Chicago's come-from-behind win in Week 1 at Detroit
Caught three passes for 33 yards, including a 12-yard, one-handed touchdown catch late in the second quarter in the Week 5 win over TB
Caught five passes for 34 yards in the Week 6 win at the Panthers and another five passes (31 yards) the following week at the Rams
Hauled in four passes for 23 yards and a touchdown in the Week 14 win over the Texans
Caught two passes for 25 yards, including a 19-yard touchdown, in the Wild Card playoff game at the Saints

Played in all 16 regular season games with 10 starts, catching 38 passes for 447 yards (11.8 avg) and three touchdowns
Recorded a season-high six catches for 61 yards (10.2 avg) and a touchdown vs. Philadelphia
Recorded four catches for 65 yards and a touchdown vs. Oakland
Played in both playoff games with one start in the divisional round win over the Seahawks where he caught three passes for 49 yards
Caught four passes for 59 yards, including a long of 42, in the NFC championship game at San Francisco

Played in all 16 games with 12 starts and ranked No. 2 on the team with 55 receptions for 636 yards (11.6 avg.) and two TDs
Was tied for No. 2 on the team in receptions of 20-plus yards with seven
Among TEs, ranked No. 9 in the league in receiving yards and receptions and No. 10 in yards per catch
His 636 receiving yards were the most by a Green Bay TE since Jermichael Finley's 667 yards in 2012
Led the team with 95 receiving yards on six receptions(15.8 avg.) vs. Minnesota, his best single-game receiving-yardage total since Nov. 7, 2016, when he was with Seattle (103 yards on eight catches vs. Buffalo).
Registered a season-high 104 yards receiving on five catches (20.8 avg.) vs. San Francisco, his first 100 yard receiving game since Nov. 7, 2016, vs. Buffalo when he was with the Seahawks; posted a 54-yard reception late in the first quarter, the third-longest catch of his career and his longest since a 56-yard TD grab with the Saints at Tampa Bay on Sept. 15, 2013

Appeared in all 16 games with 10 starts and posted 57 receptions for 520 yards (9.1 avg.) and 10 TDs
Led all NFL tight ends in TD catches on his way to earning Pro Bowl honors for the fifth time in his career; all 10 of his TD receptions came in the red zone, the most in the league among all players
Caught nine TD passes in Weeks 5-13, the most in the league over that span
Registered a season-high seven catches for a season-best 72 yards (10.3 avg.) at Tennessee
Hauled in three passes for 51 yards (17.0 avg.) and a TD at the Giants
Matched his season high with seven catches for 58 yards (8.3 avg.) and a TD vs. the Falcons

Played in all 16 games and set Seattle single-season franchise records for receptions (65) and receiving yards (923) by a tight end
Ranked No. 1 among NFL tight ends in yards per catch (career-high 14.2 average) and No. 3 in receiving yards
Recorded three 100-yard receiving games, which tied for No. 2 in the NFL among TEs
Was selected to his fourth career Pro Bowl
Also started both playoff games, hauling in six passes for 59 yards (9.8 avg.) and a TD
Caught six passes for 100 yards (16.7 avg.) vs. San Francisco, including an 18-yard TD grab in the second quarter
Eclipsed the 100-yard receiving mark for the second straight game at the Jets, hauling in six passes for a season-high 113 yards
Posted a season-high eight receptions for 103 yards (12.9 avg.) and two TDs at the Bills, becoming the first TE in team history to register eight-plus catches, 100-plus receiving yards and two TD catches in a game

Started all 11 games he appeared in; saw his first season in Seattle cut short when he was placed on IR (knee) on Nov. 30
Caught 48 passes for 605 yards (12.6 avg.) and two TDs; ranked No. 6 in the league among TEs in receiving yards through Week 12
Caught six passes for 51 yards (8.5 avg.) and a TD in his Seattle debut at St. Louis
Hauled in seven passes for 83 yards (11.9 avg.) vs. Chicago, highlighted by a 30-yard TD catch in the third quarter
Tied a single-game franchise record (Charle Young, Oct. 9, 1983) among TEs with 140 receiving yards on a season-best eight catches (17.5 avg.) vs. Carolina, the third-best yardage output of his career

Appeared in all 16 games with 13 starts for the Saints and caught 85 passes for 889 yards (10.5 avg.) and 10 TDs on his way to earning Pro Bowl honors for the third time in his career
Became the first TE in league history to register four consecutive seasons with 85-plus receptions
Ranked No. 2 in the league among TEs in receptions, No. 4 in TD catches and No. 5 in receiving yards
Had two games with 10-plus catches, tied for No. 1 in the NFL among tight ends
Matched his career high with 10 receptions for 118 yards (11.8 avg.) and two TDs at Cleveland, with nine of his catches picking up first downs, a career best
Tied his career high with 10 catches for 76 yards (7.6 avg.) and two TDs vs. SF, becoming the first TE in league history to post two games with 10-plus receptions/two TD catches in a season
Registered his third game on the season with two TD catches as part of a six-catch, 47-yard effort (7.8 avg.) vs. Baltimore

Played in all 16 games with 12 starts and posted a team-high 86 receptions for 1,215 yards (14.1 avg.) and a career-high 16 TDs
Led the league in TD catches and ranked No. 1 among TEs in receptions and receiving yards; his TD total was the second most in NFL history by a TE behind only Gronkowski's 17 in 2011
Posted a career-high five games with two TD catches
Tied the franchise single-season record with six 100-yard receiving games, which was also tied for No. 1 at the time among TEs in league annals
Was named first-team All-Pro by AP and was selected to his second career Pro Bowl
Was named the NFC Offensive Player of the Month for September, becoming the first TE in NFL history to earn the honor
During a four-game stretch (Weeks 2-5), totaled 548 receiving yards, which was the most by a TE over a four-game span in a single season in league history to that point
Played in both playoff contests with one start and caught four passes for 52 yards (13.0 avg.)

Appeared in 15 games with nine starts and posted a team-high 85 catches for 982 yards (11.6 avg.) and nine TDs
Was tied for No. 2 in the NFL among TEs in TD catches, ranked No. 2 in receiving yards and ranked No. 3 in receptions
Posted four receptions for 16 yards (4.0 avg.) and a TD vs. Kansas City, giving him a TD catch in six consecutive games dating back to 2011; that stretch set a franchise record for the most consecutive games with a TD catch and tied the second-longest streak among TEs since the 1970 AFL-NFL merger
Led the team with a season-high 146 yards and two TDs on seven receptions (20.9 avg.) vs. the Falcons, with all seven catches picking up first downs
Registered a team-high nine receptions for 115 yards (12.8 avg.) and a TD vs. Carolina

Played in all 16 games with 11 starts and posted a career-high 99 receptions for a career-best 1,310 yards (13.2 avg.) and 11 TDs
The 99 catches were the most in a season in franchise history to that point, and his receiving-yardage total was the second most in NFL history by a tight end
Was selected to his first career Pro Bowl and earned second-team AP All-Pro recognition
Team winner of the Ed Block Courage Award
Started both postseason contests, posting 12 receptions for 158 yards (13.2 avg.) and a team-high three TDs
Hauled in four passes for 100 yards (25.0 avg.) and a TD vs. Houston
Posted a career-high 10 receptions for 132 yards and a TD at Jacksonville, highlighted by a career-long 59-yard catch
Led the team with eight catches for 129 yards (16.1 avg.) at Carolina
Tied an NFL record for TEs by posting his fourth straight 100-yard receiving effort, recording 124 yards on seven catches at TB
Caught six passes for 54 yards and two TDs vs. the Colts as the Saints set a single-game franchise record for points in the 62-7 win
In his postseason debut vs. Detroit, caught seven passes for 55 yards and a TD, setting a club playoff record for receptions

Appeared in 15 games with five starts as a rookie, posting 31 receptions for 356 yards (11.5 avg.) and five TDs
Caught four of his TDs in a three-week span (Weeks 15-17)
Made his first career start at Arizona (Oct. 10) as the Saints opened up with two TEs
Posted his first NFL catch at Tampa Bay (Oct. 17), an 11-yard grab from Brees in the second quarter