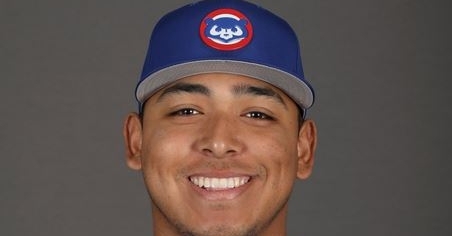 Estrada comes from the Iowa Cubs (Photo via Cubs Twitter)

Estrada (uniform number 56) is looking to make his major league debut and is available for tonight’s 6:07pm CT game against the Toronto Blue Jays at Rogers Centre.

Estrada, 23, is 3-2 with a 1.30 ERA (7 ER/48.1 IP) and nine saves in 34 games out of the bullpen with Single-A South Bend, Double-A Tennessee and Triple-A Iowa in 2022. Estrada has struck out 78 batters, compared to 20 walks, good for an average of 14.5 strikeouts per 9.0 innings. Since his promotion from Tennessee to Iowa on August 5, Estrada has not allowed a run in six appearances (6.0 IP) with 12 strikeouts, compared to one walk. His 78 strikeouts this season are the third-most among all Cubs minor league relievers.

A native of Rancho Mirage, Calif., Estrada is in his sixth professional season, all with the Cubs organization, after he was selected by the club in the sixth round of the 2017 First-Year Player Draft out of Palm Desert High School in Palm Desert, Calif. The righthander owns a career 4-4 record with a 1.94 ERA (19 ER/88.1 IP) and nine saves in 52 minor league games (three starts).

The #Cubs today selected RHP Jeremiah Estrada from @IowaCubs as a substitute player to the active roster. pic.twitter.com/T508RLvDym