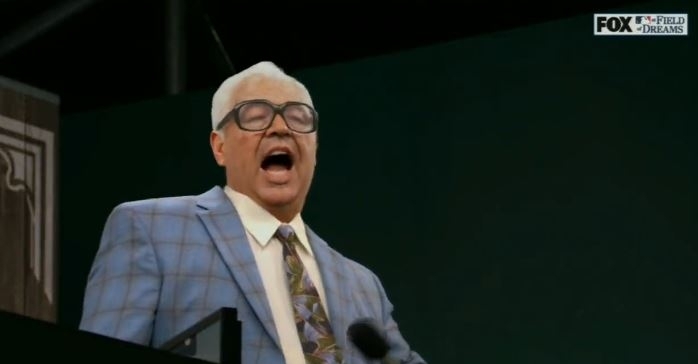 Holographic Harry Caray made his national debut on Thursday night

Things were certainly interesting during the 2022 'Field of Dreams' game featuring the Cubs and Reds on Thursday night.

During the seventh inning stretch, a hologram version of Harry Caray sang the stretch to the fans in attendance.

It was certainly an awkward few minutes for Cubs fans as their beloved icon was displayed as a computer image. It will be interesting to see if fans liked this techy rendition or not.

Personally, I thought it was cringeworthy and not in good taste at all for a beloved icon. I would rather have had an old-school video of him singing the stretch.

However, it is nice that FOX was trying something new, but I think it won't be perceived well by diehard Cubs fans.

Uhhh, how dare you, @MLBONFOX?

How dare they. HOW DARE THEY. pic.twitter.com/nQucBWyUcY