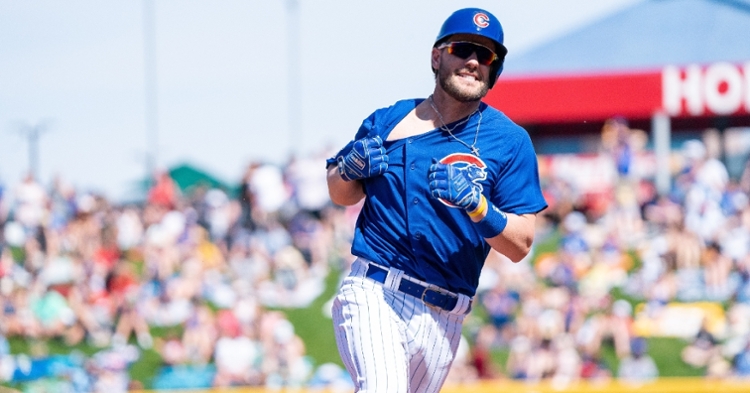 Sunday was the perfect definition of a spring training game in Arizona. Hot weather, high skies, and a light breeze that saw the ball jumping out of the yard. The Cubs and Royals combined to hit six homers on the afternoon, three from each side.

The three by the Cubs helped offset another rough outing from Kyle Hendricks as fans are starting to get concerned with his recent outs. Despite Robert Gsellman allowing six runs in a nightmare of a sixth inning, the Cubs responded with a seven-run seventh and held off the Royals 13-12 for the win.

One of the biggest surprises this spring, and not in a good way, has been Kyle Hendricks as he continues to struggle. This is going back to the second half of last year and looks far from an ace at this point. Despite going a spring long three innings and punching out five hitters, Hendricks still allowed four runs as his ERA sits at a 9.00.

Two of those runs came in the first inning when Kyle Isabel led off the game with a leadoff homer before Ryan O'Hearn answered that with a solo shot of his own to give the Royals a 2-0 lead.

With Angel Zerpa on the mound for the Royals, the Cubs responded in the second as Patrick Wisdom unloaded one onto the left-field berm to put the Cubs up 3-2.

After his scoreless second on the mound, Hendricks ran into more trouble with Emmanuel Rivera ripped a two-rbi double off Hendricks to put the Royals back in front 4-3.

Daniel Norris was called on to pitch the fourth and fifth inning and was impressive in those innings. Norris did not allow a run, but he got through the lineup in under 20 pitches which is precisely what you look for during spring. Looking to reward him for that effort, it was that man again as Wisdom took a low and outside pitch and lined it over the left-field fence for his second homer of the game and tied things up 4-4.

As if eight combined runs in the first five frames were not good enough, the brunt of the offense was about to pick up as the teams would score a combined 17 runs the rest of the way. The first six came off Gsellman as he made his spring debut with his new team.

Not only did Gsellman allow a leadoff homer to O'Hearn for his second of the day, but he allowed the first five men to reach. Nick Pratto picked up an RBI triple and scored on a wild pitch to make things 7-4. In total, six runs came across to score, with Gsellman being charged with five as the Cubs found themselves trailing 10-4.

Down, but not out, Robel Garcia began the comeback attempt, as his two-run single in the bottom of the sixth pulled the CUbs within 10-6. One inning later, it was time for the Cubs offense to bust through, and they did so in a big way.

With one down, Nelson Maldonado connected for the Cubs third and final homer of the day as his solo shot made things 10-7. That seemed to jumpstart things for the Cubs offense as a pair of walks put two runners on base, but there were two down.

That didn't bother the Cubs as they were about to rip off one of the best two-out rallies in quite some time. Starting with Ed Howard and his single, the Cubs saw both those base runners come around to score, and just like that, you had a 10-9 game.

A few pitches later saw, Pete Crow-Armstrong tie things up on a wild pitch and saw the Cubs take the 11-10 as Howard came around to score on an error on that same play. Another Garcia walk kept the line moving before Darius Hill tripled home another run to make things 12-10. The very next hitter was Ilderamo Vargas as his ground-rule doubled capped off what was a six-run two-out rally and saw the Cubs leading 13-10.

Following the scoreless seventh inning by Jesse Chavez, Matt Dermody was called on to pitch the eighth and made quick work of the Royals to keep the Cubs in front. Looking to pick up the save one inning later was Chris Martin as he looked to build on what has been a solid spring so far.

Martin not only struggled with his command as he walked one-hitter to go with no strikeouts, but he was hit hard, surrendering three hits and two runs. Those runs came off the Vinnie Pasquantino double and a Seuly Matias single to pull the Royals within 13-12. That is as close as they would get as Martin did what he needed to do to finish things off and preserve the win.