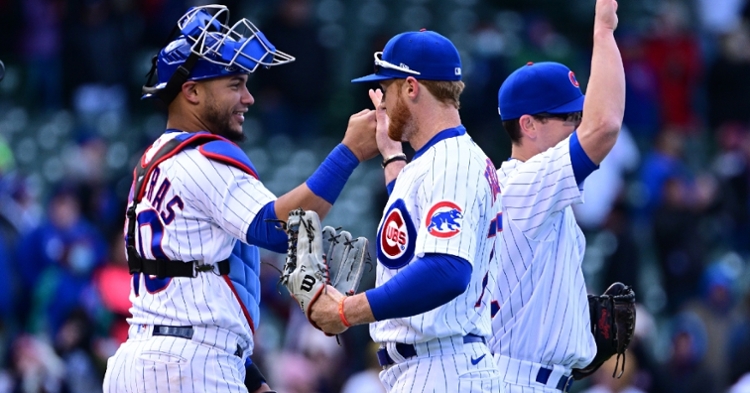 I would like to see a show of hands for those who thought the Chicago Cubs (2-0) would win their first two games against Corbin Burnes and Brandon Woodruff. Congratulations, you are our lucky winners as the Cubs topped the Milwaukee Brewers (0-2) 9-0 on Saturday.

As expected, the weather conditions were slightly better with sunny skies, but a wind coming off Lake Michigan made what was expected to be a low-scoring affair. In a matchup between Cy Young candidate Woodruff and rising star Justin Steele, it was Steele who got the upper hand, giving the Cubs five shutout innings allowing just four hits to go with one walk and five punchouts.

He teamed up with Keegan Thompson, Scott Effross, and Ethan Roberts as they combined to allow no hits in four scoreless relief innings with two walks and five punchouts. For Roberts, it was his MLB debut that couldn't have come at a better time.

While Steele and the Cubs pitchers were having a great time on the mound, Woodruff was not as he suffered a rare clunker, much like Burnes the start before.

His problems stemmed from command, where he had three walks and two punchouts while throwing a career-high 40 pitches in the first inning.

The Cubs made him pay for that with Rafael Ortega, Willson Contreras, and Ian Happ all taking walks to open the game. Add in the hit by pitch to Nick Madrigal, and the Cubs had a 1-0 just four batters in.

Chicago continued to pile on the first inning, with Frank Schwindel picking up an RBI forceout ahead of the Seiya Suzuki sacrifice fly as the Cubs raced out to the quick 3-0 lead. That was the first RBI of his career for Suzuki, as his great day was far from over.

The lone walk for Steele came in the second inning, but apart from that, the Brewers didn't have much going for them in the first three innings. Not only did the Cubs push across three runs in the first, but the top of the order was at it again in the third, looking to chase Woodruff in the process.

One out singles from Happ and Schwindel got the party started before Suzuki followed that up with another single for his second RBI of the day. One inning later saw Steele with his first trouble of the game, allowing a pair of singles to Willy Adames and Christian Yelich to open up the inning, only to recover without allowing a run and keeping things 4-0.

Looking to add to their lead, Ortega picked up a one-out double before advancing to second on another Contreras hit by pitch. Happ followed that up with an RBI single to extend the lead to 5-0, which forced Craig Counsall to go to his pen and bring in Jose Urena.

Things continued to worsen as Urena walked the first three batters he faced, including a bases-loaded walk to Suzuki that had the Cubs up 6-0. Add in a wild pitch later in the fourth, and the Cubs held a 7-0 lead through four and were in complete command.

A leadoff single by Kolten Wong to begin the fifth had the Brewers in business, but Steele recovered to induce an inning-ending double play as his outing ended. This marks two great starts in a row for Steele going back to his final start of the year in Pittsburgh, which is promising.

Coming off a strong spring was Thompson, as the right-hander picked up right where he left off. Not only did he fail to allow a hit, but he struck out three of the first four hitters he faced and made it look easy. With Jandel Gustave summoned to pitch in the bottom of the sixth, the Cubs wanted to keep the pressure on, and that they did.

Singles by Contreras and Schwindel helped the cause, as did a walk by Jason Heyward to load the bases with two outs. Looking for another big hit was Patrick Wisdom, as he had a great opportunity to bust things open even more. Although he didn't make solid contact, a brief mishandle by Wong was all he needed as he legged out an infield single to plate two runs with the Cubs now in front 9-0.

Although that was the last of the scoring on the afternoon, the Cubs had another chance in the seventh, but came up empty. In the eighth, things got exciting as tempers began to flare.

After getting hit three times on Saturday and again on Thursday, the Cubs are sick of Milwaukee pitching. Thompson took it upon himself to make a point by drilling Andrew McCutchen with a 94 MPH heater in the hip. That resulted in bench warnings plus a Thompson ejection as he did what he needed to do to stick up for his guys.

Both benches cleared following that pitch as you could see tempers flaring in the Brewers dugout.

Once the excitement calmed down, Effross came on to finish the inning, striking out Adames looking to end the frame.

With just three outs to go, David Ross called on the 24-year rookie Roberts to finish things off as he made his MLB debut. Blowout games are often the best time for players to make their debut as it provides them with a soft landing to get their feet wet.

Although Roberts hit Yelich in the foot to lead things off, then walked Keston Hiura with two outs, he managed to make the pitches he needed to make. That included inducing a Hunter Renfroe double play and then finishing things off with Tyrone Taylor groundout to end the game.

The Cubs will go for the sweep tomorrow at 1:20 PM as Marcus Stroman will make his Cubs debut against Freddie Peralta.