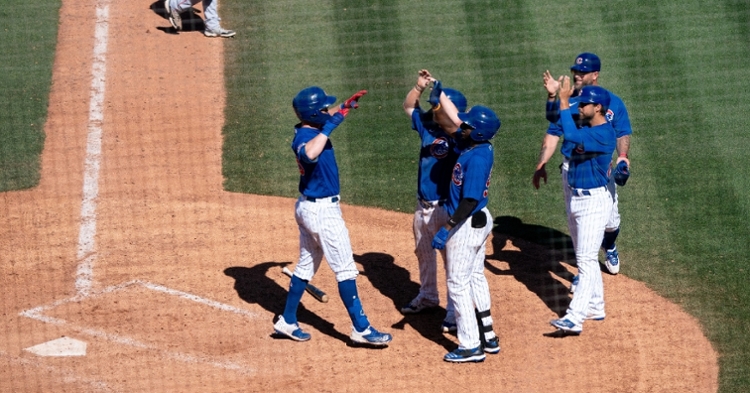 Who said a little spring training drama was a bad thing? Well, for the Cubs, drama was their middle name as they waited until their final at-bat to give the fans what they were looking for. After surrendering the go-ahead runs in the top of the eighth inning, the Cubs came up to bat in the bottom of the ninth, looking for some more late-game magic.

That magic didn't come from your usual heroes, but instead a minor leaguer who is starting to make quite an impression. I am talking about first baseman Grayson Byrd who connected for a walk-off three-run homer to give the Cubs a 5-4 win. The win also ensures the Cubs can do no worse than finish .500 in the spring, which could be considered a minor accomplishment.

The @Cubs walk it off!

Getting his first start of the spring was Mark Leiter Jr, as the Cubs are still trying to figure out his role for the season. Leiter has been solid all spring in his relief roles, and on this day, he gave the Cubs three innings of work, allowing a pair of runs with neither of them earned. Those runs came in the first two innings as Leiter had to battle through some defensive miscues to get the job done.

Tyler Wade led the game off with a single and then came around to score later in the inning off a costly Frank Schwindel error to put the Cubs in an early 1-0 hole. One inning later, the Anaheim offense was at it again when Jack Mayfield was able to capitalize on another error delivering an RBI ground out for a 2-0 lead.

Although it took the Cubs a little while to get to Patrick Sandoval, who was outstanding in his 4 2/3 innings of work, it became a case of better late than never. After shutting the Cubs out through three innings, the Cubs offense finally rose to the challenge in the fourth to get on the board for the first time.

With two down in that inning, Schwindel looked to make up for his earlier error as his single kept the inning going for the time being. One batter later, Seiya Suzuki came through as he belted his second homer of the spring to tie things up 2-2. Although primarily a struggle most of the spring, Suzuki has come up with two massive swings, both of them being home runs.

Take away the fourth inning, and things were quiet for both sides as the pitching began to dominate the game. Archie Bradley and Austin Warren gave the Angels 2 1/3 solid innings of work despite working through some command issues. Command or not, the bottom line is they didn't give up runs which is everything you can ask for and more from your pen.

For the Cubs, you have to give Leiter Jr a ton of credit as he could have folded after those early-inning defensive woes. However, not only did he dig deep to finish out strong, but the Cubs bullpen continued to pitch well, with Michal Givens, Scott Effross, and Michael Rucker coming on to throw four shutout innings of relief, striking out eight batters in the process.

This was also the first spring appearance for Givens, who struck out the side in his inning of work to show the Cubs what he can on the mound. Ben Holmes and Eric Yardley also gave the Cubs scoreless outings as the Angels managed to push across a pair of runs against one of the Cubs pitchers this spring.

Minor leaguer or not, Cayne Ueckert has an excellent opportunity to make this roster out of spring as he was called on to pitch the eighth. Ueckert has been on quite a roll for the better part of the spring, only to see that roll come to an abrupt halt as his lack of command forced him into trouble.

Although no longer pitching, Ueckert was responsible for the two runners on base and the Preston Palmeiro single put the Angels back in front 4-2 with just six outs to go. The Cubs had a chance in the eighth with a pair of singles by Edmond Americaan on Owen Caissie, but couldn't breakthrough as they headed to the bottom of the ninth down two.

Unable to cash in during their half of the eighth, the Cubs wanted to make sure that wouldn't happen again and looked to strike early. Not only did Alfonso Rivas lead things off with a single, but he would advance to third on a Jacob Wetzel double as the Cubs had a pair of runners on base with no outs.

Following a Luis Verdugo strikeout, Byrd strolled to the plate with a chance to either tie the game or play the hero. Facing a 1-2 count, Byrd chose to be the hero in this one as his three-run shot lifted the Cubs to a walk-off 5-4 win.