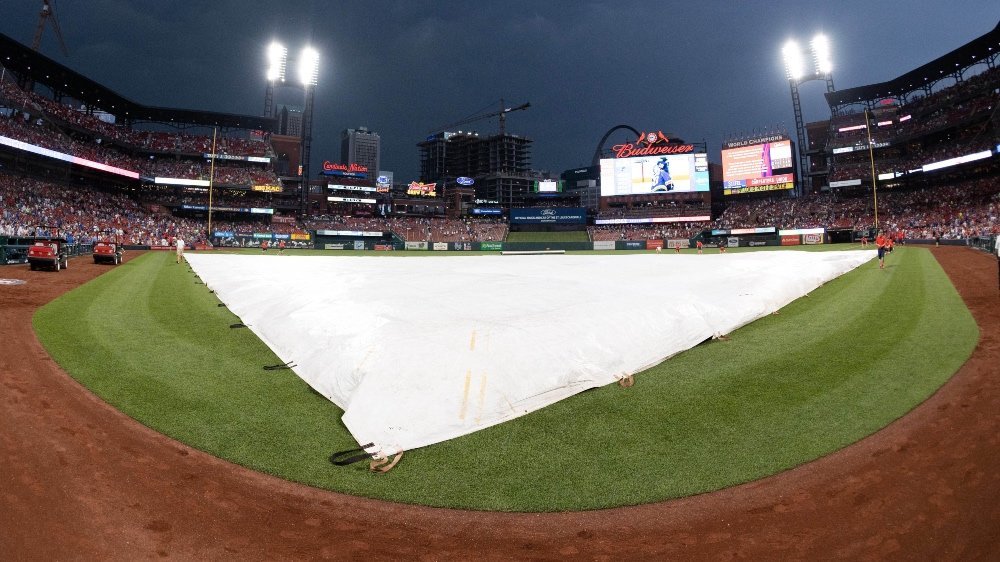 The rain delay at Busch Stadium, which spanned over 3 1/2 hours, lasted longer than most games. (Credit: Zach Dalin-USA TODAY Sports)

ST. LOUIS, Mo. — A lengthy rain delay gave way to late-game excitement in a contest at Busch Stadium that began on Saturday evening and ended on Sunday morning. In the end, the St. Louis Cardinals (29-28) beat the Chicago Cubs (31-25) 7-4 to claim the series victory ahead of Sunday afternoon's finale of the 3-game set. Ominous clouds loomed overhead throughout the early innings, culminating in a rain delay that lasted over 3 1/2 hours. The delay was initiated with the game tied 2-2 midway through the fifth inning, and the contest itself did not conclude until approximately 1 a.m. CDT.

Three of the four runs scored prior to the weather delay came via the home-run ball. Fresh off hitting 51 homers in the month of May to set a new club record for dingers hit in a single month, the Cubs started June off on a familiar note, as Anthony Rizzo jacked a 421-foot long ball in the opening inning. Cardinals slugger Paul Goldschmidt answered Rizzo's solo bomb with one of his own in the next inning by clubbing a 422-foot shot. Cubs outfielder Jason Heyward, an erstwhile Cardinal, kept the back-and-forth home-run derby alive by skying a 392-foot blast to lead off the second frame. The Cardinals went on to tie the game up via a 2-out RBI single hit by Marcell Ozuna in the bottom of the third.

The 2-2 deadlock carried over into the lengthy rain delay, which resulted in both starting pitchers having their nights cut short. Reliever Tyler Chatwood toed the rubber for the Cubs once play resumed, and in the sixth, he gave up three runs on four hits, including an RBI single by former Cub Dexter Fowler. Chicago responded by pushing two runs across on three hits in the top of the seventh. After a leadoff single by Addison Russell, David Bote smacked an RBI double in the gap between right and center that made the score 5-3. A pitching change soon followed, and, in Cardinals reliever Andrew Miller's first matchup after entering the contest, utility man Daniel Descalso, who played for the Cardinals for five years earlier in his career, loaded the bases for the Cubs by reaching first on a bunt single.

The successful bunt brought an end to a dismal 0-for-25 stretch by the Cubs with runners in scoring position. Despite having the bases juiced with no outs after that, the Cubs were able to muster just one more run in the seventh, which came on a fielder's choice groundout hit by Kris Bryant. The Cardinals tacked on a couple of insurance runs when they went yard twice off Cubs reliever Kyle Ryan in the eighth. A solo bomb by Fowler was followed by a solo round-tripper from Harrison Bader, which resulted in the 7-4 St. Louis win.