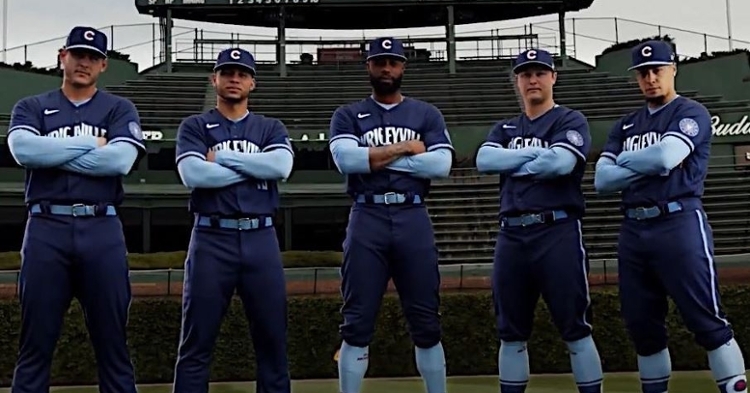 The Cub will wear this uniform on Saturday

CHICAGO – The Chicago Cubs in partnership with Nike today unveiled the club’s Nike Chicago Cubs City Connect Jersey which is a nod to Second City symbolism and Cubbie culture and features unique design elements that celebrate not only the ballpark’s surrounding neighborhood, but all 77 neighborhoods that make up the great city of Chicago. The team will wear the new jersey on field Saturday, June 12, for the home game against the St. Louis Cardinals and fans will have the opportunity to purchase items from the Nike Cubs City Connect Series collection starting today, June 8.

Developed in partnership with MLB clubs, Nike MLB City Connect Series celebrates the bond between each club and its city and pushes the boundaries of baseball uniform design to create new traditions and grow the game of baseball. The uniform series explores the personality, values and customs that make each community and their residents unique. As the only MLB team with a ballpark in the heart of a neighborhood, the Nike Cubs City Connect Jersey was inspired, not just by the club’s surrounding neighborhood of Lakeview, known by its nickname “Wrigleyville,” but by all 77 of Chicago’s distinct neighborhoods.

“One of the pillars of the Cubs organization is to ‘be a good neighbor,’” said Cubs Vice President of Marketing Lauren Fritts. “We’re aware of the impact we have not only on the neighborhood surrounding us, but on all of Chicago’s 77 neighborhoods. Cubs fans don’t just reside on the North Side, and the work we do as an organization and through Cubs Charities isn’t specific to just one neighborhood. Rather than simply unveil a new jersey, we wanted to use City Connect as a platform to unite our diverse city and celebrate those doing good in their neighborhood.”

As a way to further bring together residents of the City of Chicago, Cubs brand ambassadors will be in all 77 neighborhoods in Chicago starting today, June 8, through Thursday, June 10, looking for fans showcasing their Cubs pride and will randomly select Cubs fans to attend the June 12 game at Wrigley Field. The winners will receive two tickets to the June 12 game as well as their own Nike Cubs City Connect Jersey with their neighborhood listed on the back. Through this effort, the Cubs will celebrate the way baseball at Wrigley Field unites members of all 77 neighborhoods.

“The Nike Chicago Cubs City Connect Jersey is a Chicago story — not just Wrigleyville,” said Nike Sr. Creative Director, MLB, Wil Green. “The city’s flag, municipal mark and public rail lines are icons of the city, which speak to the city’s connectivity. Within the design, we utilized elements of each to mirror the Cubs’ ambition of unifying the city’s neighborhoods.”

Inspired by Chicago’s 77 distinct neighborhoods, the Nike Cubs City Connect Jersey features unique design elements that celebrate the city’s history and residents. On the left sleeve of the jersey is the Chicago municipal device – a century-old symbol found around the city whose design pays tribute to Wolf Point where the north and south branches of the Chicago River meet. Across the chest of the jersey, the word “Wrigleyville” is stitched in the shape of the iconic Wrigley Field Marquee, serving as an acknowledgement of the nickname given to the neighborhood where the club plays. The jock tag features the phrase “Respect Our Neighborhood” which was inspired by the signs displayed as fans leave Wrigley Field and is meant to honor the uniqueness and diversity of Chicago’s 77 neighborhoods. The uniform’s navy base complements the white, red and light blue color scheme of the Chicago flag with one six-pointed red star included in the center of the Cubs logo on the caps. Across the collection, the names of all 77 neighborhoods are noted with Lakeview appearing in red as a tribute to the neighborhood the Cubs call “home.”

Starting today, fans will have the chance to purchase items from the Nike Cubs City Connect Series collection at the Cubs Team Store located at Gallagher Way and on Michigan Avenue. The collection includes authentic and replica jerseys, T-shirts, caps and a hoodie, as well as a bullpen jacket that notes the names of all 77 neighborhoods. Items from the collection also can be purchased at www.nike.com/nike-app, www.mlbshop.com and at the MLB Flagship store in New York City.

Chicago is a city of neighborhoods, and the @nikediamond Cubs City Connect Series collection is inspired by #All77 of them.#CubTogether ?? https://t.co/0Oogzu8tVy pic.twitter.com/gDx23adxlu