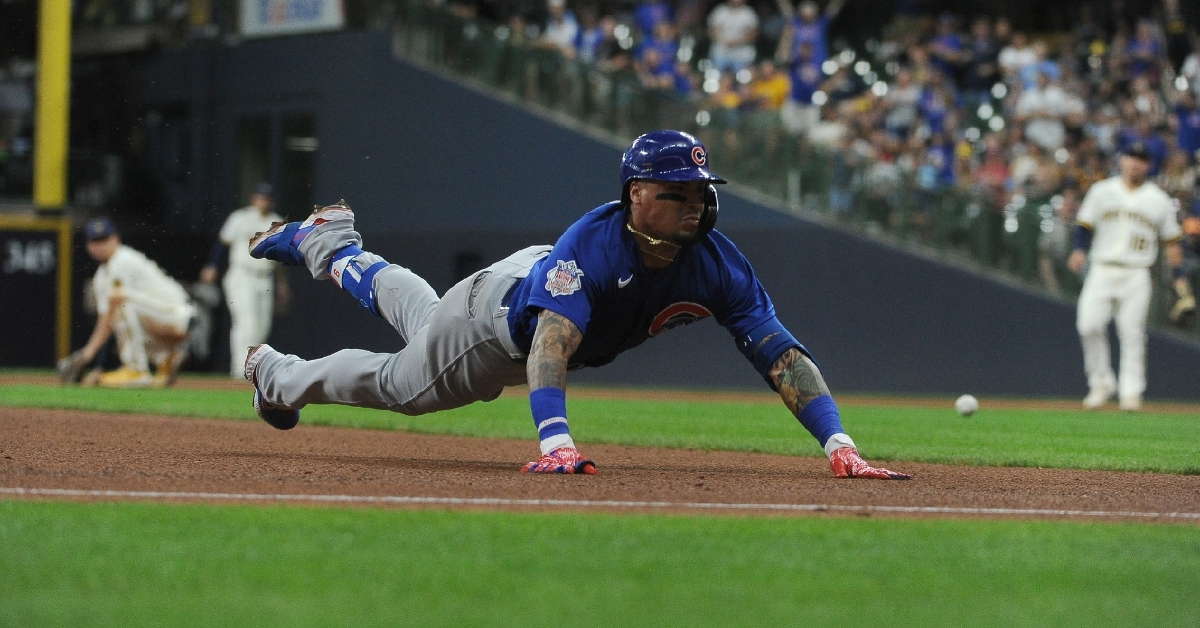 MILWAUKEE — Despite giving up just two hits, the Chicago Cubs (42-38) lost their fifth straight on Tuesday, with the Milwaukee Brewers (47-33) eking out a one-run victory at American Family Field. The North Siders outhit the Brew Crew 6-2 but went 1-for-10 with runners in scoring position and left 12 runners stranded on base. In the ninth inning, the Cubs put two on against Josh Hader, but a close play at first base went the Brewers' way to close out the 2-1 contest, which marked the Cubs' first loss in which they gave up two or fewer hits since 2013.

Zach Davies, a former Brewer, started on the bump for the Cubs and tossed four innings of two-run ball, in which he struck out six. On the other side, Brandon Woodruff fanned eight in his six innings of work, giving up just one run. Willy Adames scored the first run of the evening in the bottom of the first. He drew a one-out walk and stole second prior to coming home on a Christian Yelich double.

Woodruff hit Wisdom on the left hand with a pitch in the second. Wisdom was able to shake off the pain and remain in the game, but Manny Pina threw him out when he attempted to steal second, which ended the half-inning. Sergio Alcantara was able to successfully steal against Pina in the third. He led off the inning with a single. After Joc Pederson drew a two-out walk, Willson Contreras struck out. Baez smacked a leadoff triple into the right field corner to begin the fourth and later scored on a one-out double by Patrick Wisdom. Following Wisdom's walk, Jason Heyward was walked, but the Cubs failed to take the lead.

The Brewers went back in front in the home half of the frame. Yelich walked to lead things off and went on to steal second, barely avoiding being tagged out by Alcantara. Jace Peterson then came through with a two-out base knock, which Heyward misplayed in right. As a result of the error, Yelich scored and Peterson reached second. Keston Hiura was hit by a pitch after that, and Pina drew a walk to load the bases. However, Davies struck out Woodruff to escape the jam.

Contreras singled with two outs in the fifth, and Baez then drew a base on balls. Ian Happ deserted both of them by flying out. Brad Wieck pitched a scoreless bottom of the fifth, and Keegan Thompson pitched a scoreless bottom of the sixth. The Cubs loaded the bases with two outs in the seventh. Pederson sparked the two-out rally with a single off Brent Suter. Jake Cousins then came in to pitch and walked Contreras before plunking Baez's elbow guard. Happ struck out to leave the bases juiced, though.

Omar Narvaez led off the bottom of the seventh with a broken-bat comebacker, which Daniel Winkler mishandled. Winkler shook off the fielding error and tallied three consecutive outs afterward. Brad Boxberger walked Heyward in the eighth, and Heyward headed to second on a wild pitch. After Alcantara was walked, Eric Sogard lined into a double play, with Peterson catching the line drive at first and doubling off Alcantara. Adam Morgan, who was just called up earlier in the day, tossed a 1-2-3 eighth to usher in a nail-biter of a ninth.

Hader toed the rubber having yet to blow a save in 2021, and he began by striking out Jake Marisnick. Pederson singled after that, and Contreras drew a walk to push the tying run into scoring position. Baez then struck out on four pitches, whiffing badly at all three strikes, and Jose Lobaton pinch hit for Morgan with the Cubs down to their final out. Lobaton hit a grounder to Peterson, and Hader hurried to cover first but seemingly overran the bag after gloving the toss from Peterson. Hader dived toward first and touched the base with his glove just before Lobaton arrived, leading to Lobaton tripping over Hader and injuring his right shoulder by trying to brace his fall. The play was reviewed, and the out call was upheld, thereby concluding the Brewers' 2-1 win.

Josh Hader picks up another save but not without some dramatics as this crazy play to end it leaves Cubs catcher José Lobatón injured pic.twitter.com/XmdFgzt8Tr