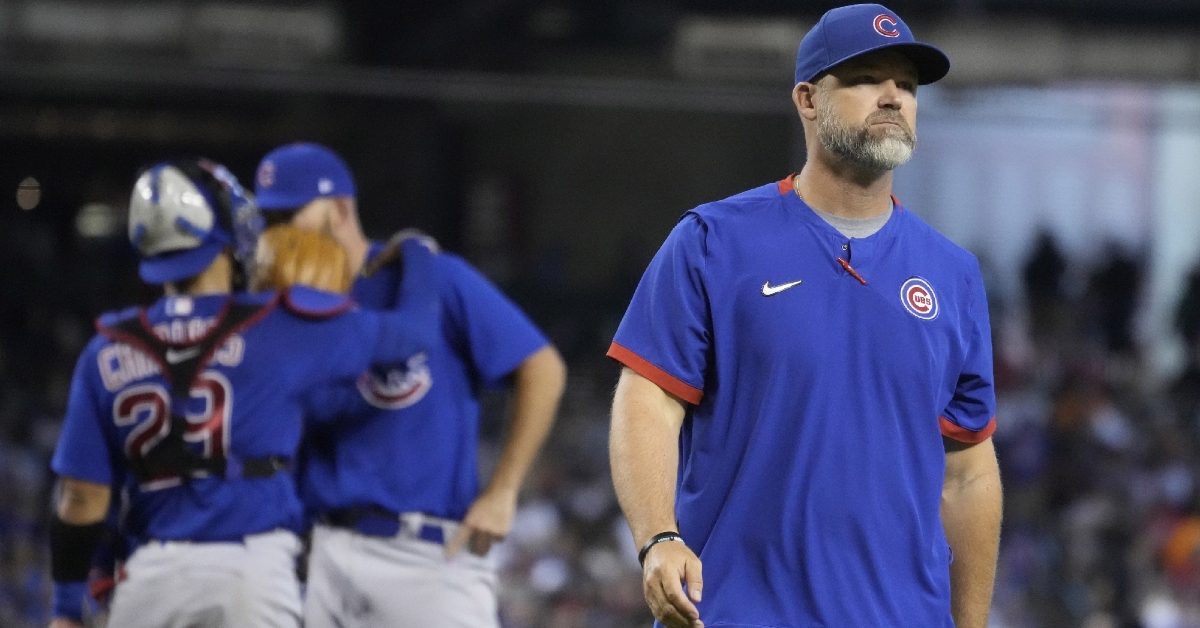 PHOENIX — Missing out on a chance to sweep the team with the worst record in the majors, the Chicago Cubs (46-47) came up short in an attempt at pulling off their second straight ninth-inning comeback. The Cubs plated three runs in the final frame and beat the Arizona Diamondbacks (27-68) 4-2 on Saturday, but the D-backs held onto their late lead on Sunday, winning 6-4 and avoiding suffering a three-game sweep at Chase Field.

Merrill Kelly pitched a gem for the Diamondacks by tossing eight innings and striking out six. He had a chance at throwing a complete game but gave up two hits to begin the ninth, resulting in Joakim Soria coming out of the bullpen. Zach Davies, a native of the Phoenix area, started on the mound for the Cubs and helped his cause in the opening inning by picking Josh Rojas off at first after Rojas reached via a leadoff walk. Rojas was initially called safe on the pickoff, but the Cubs successfully challenged the ruling.

Diamondbacks right fielder Kole Calhoun robbed Jake Marisnick of a hit with an incredible diving grab in the second. Patrick Wisdom led off the half-inning with a single, but the Cubs did not score. Calhoun made another great catch to end the top of the third, as he raced to the wall in the corner and snagged a well-hit ball off the bat of Anthony Rizzo. In the next inning, shorstop Nick Ahmed made a great play that resulted in the third out, as he charged a slow roller hit by Wisdom and fired a bullet to first for the putout.

Kole's having quite a day. And it's only the 5th inning. pic.twitter.com/17LmrCLWzJ

While the Cubs went 4-for-8 with runners in scoring position, the Diamondbacks went 3-for-14 and could have easily won by a larger margin. Ahmed smacked a leadoff double in the third but was left stranded. Calhoun grounded out with two away and runners on the corners. Davies struggled in the fourth, walking Eduardo Escobar and giving up a double to Christian Walker before walking David Peralta to load the bases with no outs. Pavin Smith plated Escobar with a base knock to right, but an ensuing foulout by Ahmed was followed by Daulton Varsho grounding into an inning-ending double play.

Rojas hit a one-out double in the fifth and scored when Calhoun tallied a single in the next at-bat. Walker collected a base hit with two outs, and Kyle Ryan then relieved Davies. After walking Peralta, Ryan forced Smith to ground out with the bases loaded. The Cubs came alive at the plate in the sixth, beginning with a leadoff ground rule double by Robinson Chirinos. With two outs and Chirinos at third, Kris Bryant swung at the first pitch and lifted a double into the right field corner, thus scoring Chirinos. Javy Baez, who holds an eight-game hitting streak, swung at the very next pitch and brought Bryant home with a single to left. Kelly then stopped the bleeding by striking out Wisdom.

Ahmed singled to kick off the home half of the sixth, and Varsho then drew a walk. A sacrifice bunt by Kelly advanced both runners and led to Adam Morgan relieving Ryan. A base on balls drawn by Rojas loaded the bases, but Morgan was then bailed out by a baserunning mistake. Calhoun hit a chopper to Rizzo at first, and Rizzo fired home to Contreras for a force out. While attempting to avoid getting in the way of Rizzo's throw, Calhoun fell down but seemed to think that the ball he put into play was ruled foul, as he showed no urgency to reach first upon getting back to his feet. Contreras noticed Calhoun's lethargy and took advantage of it by throwing to Morgan, who covered first, for a rare 3-2-1 double play that got the Cubs out of the inning.

Walker committed a fielding error at first that allowed the leadoff hitter, Jason Heyward, to reach in the seventh. Marisnick then grounded into a 1-4-3 double play, though. Daniel Winkler walked Escobar and hit Walker with a pitch in the first two plate appearances following the stretch. Peralta then fouled out, but a wild pitch moved up both runners. Smith was intentionally walked to load the bases, and Escobar scored on an Ahmed groundout. Rex Brothers took over on the bump and wasted little time in throwing a wild pitch, which plated Walker. Varsho was intentionally walked to bring Kelly to the plate, and, after Varsho stole second, Kelly grounded out to end the inning.

Brothers issued a leadoff walk to Rojas in the eighth, and Rojas proceeded to steal second. With one out, Escobar crushed a 432-foot two-run homer out to left-center, increasing the Diamondbacks' lead to four. The Cubs dished out 11 walks on the day, and all five pitchers to toe the rubber for the North Siders walked the first batter they faced, making the Cubs the first team since 1980 to use five or more pitchers and have each one of them issue a walk in the first plate appearance.

All-Star @escobardelapica with his 1st blast of the second half! ?? pic.twitter.com/v7JI3crYib

The Cubs used 5 pitchers today, and all 5 walked the first batter they faced.

They're the first team to use 5 or more pitchers with every one walking their first batter since the Rangers did it at Toronto on June 14, 1980.

Bryant led off the ninth and slugged his second double of the day, which bounced off the wall in center, and Baez pushed him across with a single to right. Soria then came on to pitch with a chance to redeem himself for blowing the save on Saturday. He struck out Wisdom and forced Heyward to fly out. Rafael Ortega hit a critical two-out double off Soria in the ninth inning of the previous game, and he repeated the feat on Sunday, as he slapped a double to left that scored Baez, who advanced to second and third due to fielder's indifference. Willson Contreras swatted the go-ahead home run in the final frame on Saturday but was able to replicate that clutch plate appearance as a pinch hitter on Sunday. Instead, he struck out looking at a pitch thrown over the plate on a full count, thereby wrapping up the Cubs' 6-4 loss to the Diamondbacks.