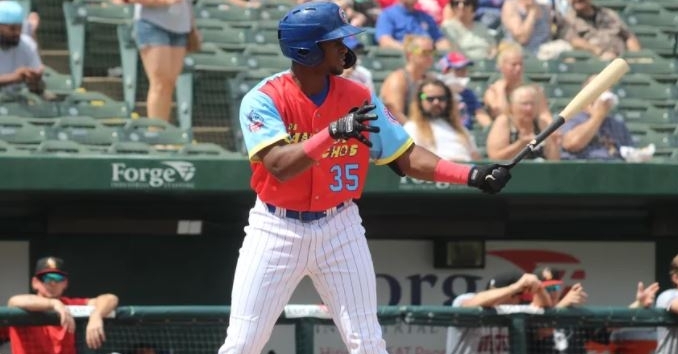 Canario has been impressive in 2021 (Photo via Casey McDonald)

On this edition of the Cubs Corner, presented by Coach’s Bar and Grill, Anthony welcomed CubsHQ’s very own Dustin Riese to break down all things Cubs prospects as the Cubs try to build the next great Cubs team.

The episode began with Dustin outlining the troubles that 2020 caused the organization and certain players with a lack of a minor league season. However, he was also able to explain how important it was for the MLB to have a full minor league season and a larger draft — and what it meant for various players and their developments.

Riese also gave his thoughts on all of the trades the Cubs made this season.

* Rizzo to the Yankees for Kevin Alcantara and Alexander Visciano

* Bryant to the Giants for Alexander Canario and Caleb Killian

* Joc Pederson to the Braves for Bryce Ball

* Ryan Tepera to the White Sox for Bailey Horn

* Jake Marisnick to the Padres for Anderson Espinosa

Plus he gave excellent insight on the rest of the Cubs farm system and gave some predictions on who may come to the big leagues in 2022.

As always this episode is available on Apple Podcasts, Soundcloud, and the CubsHQ website.