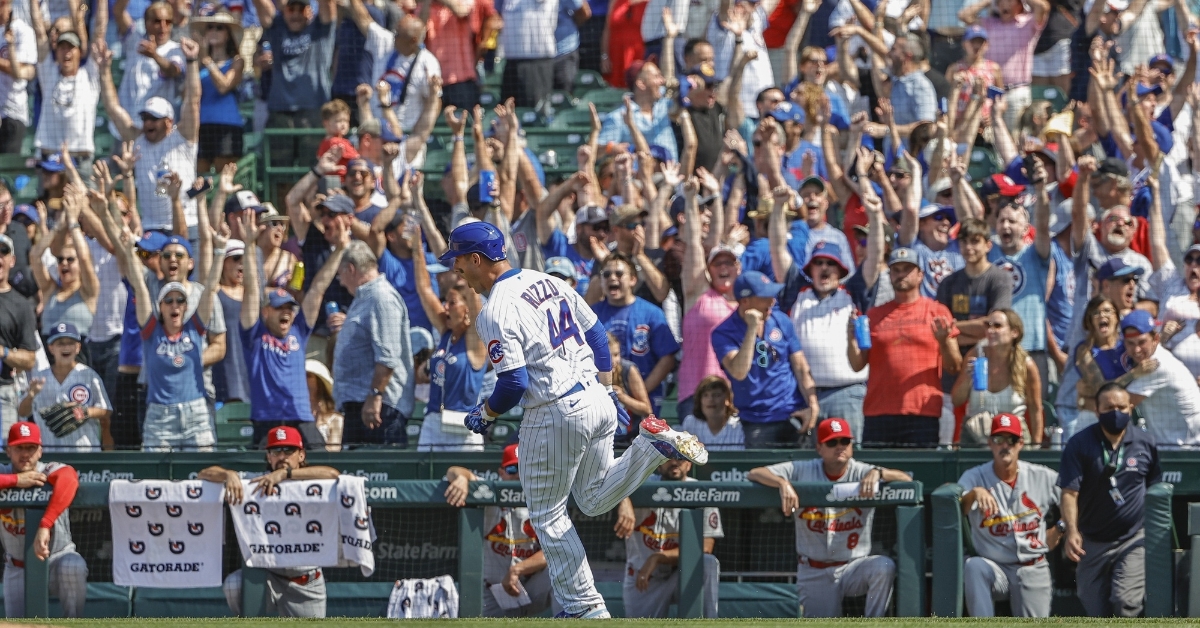 CHICAGO — Trailing 5-1 midway through the fifth inning, the Chicago Cubs (36-27) were midway through a likely loss when they flipped the script and gave the energized crowd at Wrigley Field something to really cheer about. Friday's contest at the Friendly Confines was the first since 2019 in which the ballpark was open at 100% capacity, and the North Siders made what was already a special day even more special by completing their largest come-from-behind victory of the season in an 8-5 triumph over the rival St. Louis Cardinals (32-31).

In a jam-packed stadium, Kohl Stewart started on the mound for the Cubs and went 1-2-3 through the first. Joc Pederson led off the home half of the opening frame with a single but was then thrown out at second as part of a "strike 'em out, throw 'em out" double play. Johan Oviedo fanned Kris Bryant, and Yadier Molina gunned down Pederson at second, curtailing his steal attempt. Stewart beaned Tyler O'Neill in the second, and Molina singled after that. Matt Carpenter plated O'Neill with an RBI base knock, but Anthony Rizzo cut off the throw from the outfield and threw out Molina at third on the play.

Yadi throwing out the runner?

Yadi throwing out the runner. pic.twitter.com/iHA1XjOneG

Oviedo was walked to begin the second, and Baez nearly doubled him off at first after catching a line drive hit to shortstop by Tommy Edman. Following a Paul Goldschmidt single, Oviedo scored from second on an RBI base hit by Nolan Arenado. Jason Heyward nearly pulled off a diving grab in right-center of Arenado's single, but the fall squirted out of his glove as he hit the ground. Stewart left runners at the corners stranded by striking O'Neill out swinging.

Pederson put the Cubs on the scoreboard with a leadoff blast in the fourth. The dinger carried out to center and landed in the basket atop the outfield wall. In the fifth, Stewart once again issued a leadoff walk to Oviedo, which was followed by an Edman single. Dylan Carlson scored Oviedo with an RBI double that bounced off the wall in center, thus enabling Edman reaching third. Keegan Thompson relieved Stewart at that point and forced Goldschmidt to fly out prior to giving up a two-run single to Arenado.

Carlson blasts a drive off the top of the ivy in center, restoring the #STLCards' two-run lead.

Willson Contreras drew a walk to lead off the bottom of the fifth and advanced to third on a one-out single by Heyward. A passed ball suffered by Molina allowed Contreras to score, and Heyward came home on an RBI triple by Sergio Alcantara. Molina then suffered his second defensive mistake of the inning — a rarity for him — when he airmailed a pickoff attempt to third. Alcantara scooted home, pulling the Cubs within one run of the Cardinals.

Sergio Alcántara has 3 triples and 6 XBH in 25 at-bats this season!#CubTogether pic.twitter.com/WXimNxWpA2

Tommy Nance pitched the top of the sixth and ended it by fielding a comebacker off the bat of Edman and starting a 1-6-3 double play. Daniel Ponce de Leon and Rizzo engaged in an epic 14-pitch battle in the bottom of the sixth, with Rizzo fouling off 10 pitches in the gritty at-bat before electrifying the crowd with a game-tying blast to right. Since pitch counts were tracked for individual plate appearances beginning in 1988, Rizzo's at-bat was the longest in Cubs history to end in a home run.

Shortly after Bill Murray performed a rousing rendition of "Take Me Out to the Ball Game" during the seventh-inning stretch, Heyward hustled down the line for a leadoff infield single, which came on a chopper hit to first. Heyward reached third on a single by Jake Marisnick, and a two-run double smacked by Pederson off the wall in right-center provided the Cubs with the lead for the first time. Genesis Cabrera was on the wrong end of the two-bagger and was subsequently taken off the mound.

Nance, who retired the Redbirds in order in the seventh, was relieved by Ryan Tepera to begin what turned out to be a scoreless top of the eighth. Willson Contreras tacked on an insurance run with a 402-foot shot to right in the bottom of the eighth. The opposite-field blast resulted in the eventual final score of 8-5, as the Cardinals went three up, three down with Craig Kimbrel pitching in the ninth. The Cubs win marked the first instance since 2003 that the Cubs came back to beat the Cardinals after trailing by four or more runs in the fifth inning or later.

If you were wondering who leads NL catchers in homers, his name is Willson Contreras and he plays for the Chicago Cubs. #CubTogether https://t.co/iq0lKgoH7i pic.twitter.com/o7UflTR9oj