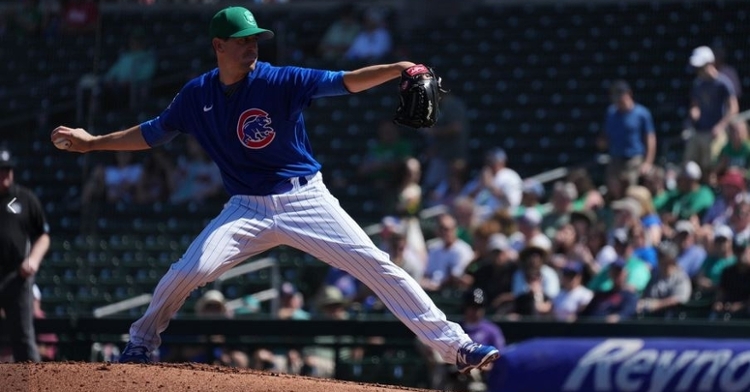 The Professor was back in session for 2022 (Photo courtesy: Cubs Twitter)

Baseball is officially back! Man, that feels so good to say. After months of an MLB lockout, the two sides recently reached a new agreement to bring baseball back. With that comes a shortened spring training and a delayed regular season, but all 162 games will be played, which is good.

Thursday marked the unofficial start of the 2022 baseball season as spring training games got underway. While most of the teams will begin action on

Friday, the Cubs not only had one game, but a pair of games as they agreed with the Chicago White Sox to open the spring slate with a split-squad Double-Header.

Unlike most spring training years where veterans slowly work themselves into a routine, this will be a condensed spring, meaning they need to get ready faster. It also means that fans will have an opportunity to see more prospects which is always a positive thing. Wins are nice to have, but they are not necessary for spring, as the Cubs fell 4-3 and 5-3 in both split-squad games.

White Sox 4 – Cubs 3: In their home opener for the Spring season, the Cubs sent Kyle Hendricks to the mound as he appears to be on track to open the regular season as the ace. Given how things work this season, don't expect Hendricks or any of the other pitchers to get a ton of work as he allowed one run on three hits in two innings of work. That run came in the second inning when Oscar Colas delivered a sacrifice fly to center for the early 1-0 lead.

Opposing Hendricks was Kyle Kubot, who was lights out in his two innings of work. Following Hendricks and his departure, Corey Abbott took to the mound as he will be looking to make the team out of spring. Abbott surrendered one run on one hit, which came on a solo shot to left, doubling the White Sox lead 2-0. For the Cubs, it was John Hicks who came to play offensively as he was responsible for all three RBIs. The first two came in the bottom of the third when he doubled to shallow left to tie things up 2-2.

Still tied 2-2 in the fifth, and with 2021 first-round pick Jordan Wicks on the mound, it was time for the White Sox to strike again using their second homer of the day to take the lead for good 3-2. In the sixth, the White Sox added another run off Scott Effross to push the lead to 4-2, and things were looking bleak for the Cubs.

Hoping to rally late, it was Hicks coming through yet again as his solo shot in the bottom of the sixth brought the Cubs within 4-3.

Chicago put a runner in scoring position in the ninth, but could not cash in as the Cubs dropped their home opener 4-3.

White Sox 5 – Cubs 3: The Cubs were at Sloan Park for the afternoon, but they were also across town to take on the White Sox at their home park. This was more of a minor league roster than their other game with lefty Ben Holmes taking the ball against Wes Benjamin. Things didn't start well for Holmes surrendering an Andrew Vaughn homer in the bottom of the first to put the Cubs in an early 1-0 hole.

Things would only worsen as Holmes was charged with four earned runs in two innings of work. The Cubs tied things up in the top of the second as top 20 prospect Kevin Made connected for an RBI single to Darius Hill for the 1-1 game. That would be as close as the Cubs would get as the White Sox continued to hammer Holmes in the second.

If one solo shot wasn't good enough, why not make it two as Zach Remillard put the White Sox in front for good 2-1. Later that inning, it was time for the Sox top prospect to come through as Yoelqui Cespedes got into a pitch and crushed it over the left-field fence to make things 4-1 Sox. Add an RBI single by Remy Gonzalez off Brandon Leibrandt in the third, and the Cubs found themselves in a massive 5-1 hole.

Not only was Benjamin strong in his outing, but so were Liam Hendricks and Tanner Banks as they held the Cubs in check through five innings allowing just one run on six hits in the process. It wasn't until the top of the sixth when the Cubs cashed in again as Delvin Zinn picked up an RBI single to make things 5-2. The Cubs would add a run later in the game, but they came up short as they dropped both on Thursday, with this score coming 5-3.