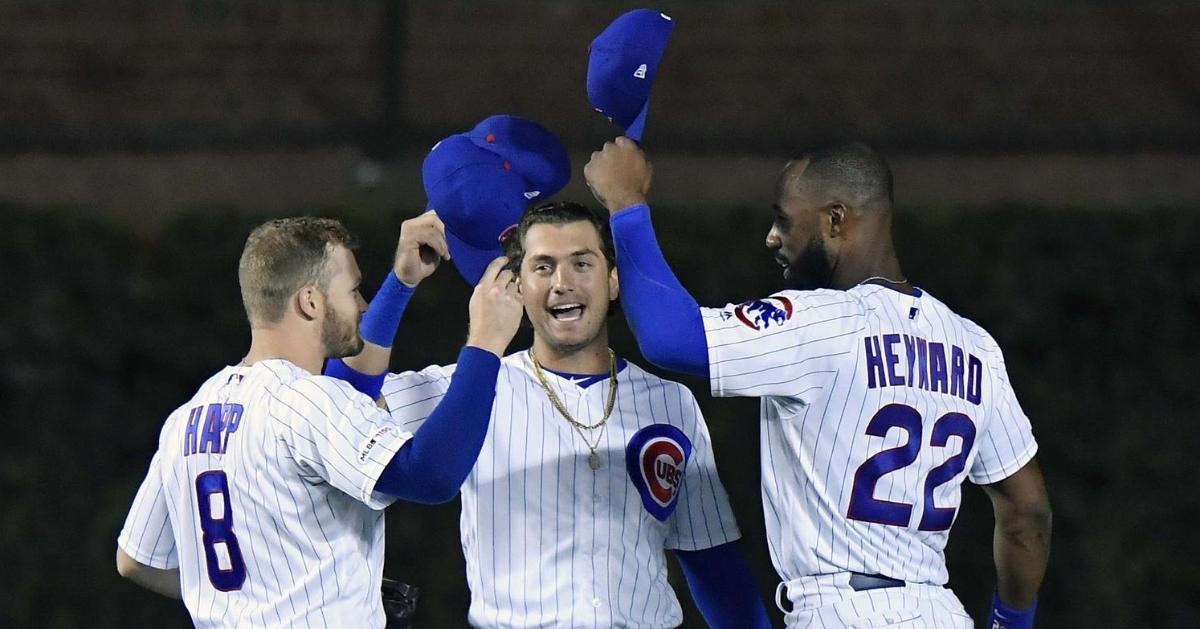 The Chicago Cubs were assuredly happy to escape with a win over the Oakland Athletics on Monday night. (Credit: Quinn Harris-USA TODAY Sports)

CHICAGO — October came early in the Windy City on Monday. Fittingly, on the day that MLB announced its postseason schedule, a thrilling game that teemed with playoff intensity took place at Wrigley Field. Battling the Oakland Athletics (64-49) for the first time on the year, the Chicago Cubs (61-51) went yard four times and escaped with a hard-fought 6-5 victory. The high-flying contest featured seven home runs in total, with all but one run being scored via a long ball.

Lost in the offensive madness was a great start on the mound by Cubs hurler Kyle Hendricks, who tossed 6 1/3 innings of 1-hit ball, in which he struck out five. The lone hit allowed by Hendricks was a 2-run jack by Marcus Semien, who swatted a pair of homers on the night. The A's were outhit 12-6, but they nearly pulled out the win because half of their hits were round-trippers. Chicago used five different relievers following Hendricks' departure, and recently acquired David Phelps closed out the contest for his first save as a Cub.

Speaking of notable firsts in a Cubs uniform being accomplished, Nicholas Castellanos went yard for the first time since getting traded to the Cubs at the trade deadline. The solo opposite-field tater to right, which marked Castellanos' first home run with the Cubs, put the North Siders on the scoreboard in the first frame. Semien answered the 2-out blast hit by Castellanos with a 2-out blast of his own in the top of third, with the aforementioned 2-run dinger putting the A's up 2-1.

Thereafter, a pitching duel between Hendricks and A's starter Chris Bassitt commenced until Javier Baez went yard off Bassitt on the first pitch of the bottom of the sixth. The 454-foot no-doubter was hit out beyond center field on the five-year anniversary of Baez's first career home run. While the solo shot from "El Mago" was quite impressive, it paled in comparison to perhaps the most impressive homer of Cubs outfielder Ian Happ's big-league tenure, which took place in the bottom of the seventh.

The Cubs scored four runs on four hits off A's reliever Blake Treinen in the seventh and took a 6-2 lead. Happ incited the scoring barrage by hammering a jaw-dropping 474-foot home run that sailed out onto Sheffield Avenue. In addition to marking the first homer of the season for Happ, who was called up from the minors last month, the leadoff moonshot moved atop the leaderboard as the longest home run hit by a Cub thus far this season. Interestingly enough, Happ was inserted into the game as a pinch hitter to start the bottom half of the seventh, which was a substitution that paid off for Chicago.

Jason Heyward recorded a single after Happ provided the Cubs with a 3-2 lead. Castellanos then tacked on an insurance run with an RBI double that plated Heyward. With two outs in the inning, Baez sent a pitch into the seats for the second time on the evening, as he skied a 2-run blast that landed in the center-field basket and placed the Cubs ahead by four runs. Oakland responded by taking Cubs reliever Steve Cishek deep on consecutive pitches in the eighth. Nick Martini, a Chicago-area native, tallied a 2-run dinger with his excited family watching from the stands. On the very next pitch, Semien smashed a solo blast that cut the A's deficit down to one run.

We didn't get buckets, but we did go back-to-back ??#RootedInOakland pic.twitter.com/NNg1ZJo2mD

Cubs reliever Kyle Ryan was given the opportunity to notch his first career save in the top of the ninth, and he was well on his way to doing so once he outed the first two batters. After a 2-out walk and an ensuing single, Ryan's stint on the bump ended, and he was replaced by Phelps. As fate would have it, Semien had a chance to tab his third home run of the affair, and he nearly did when he powered a towering fly ball to deep left field. Fortunately for the Cubs, the wind blowing in at the Friendly Confines prevented Semien's high drive from going out, and Happ sealed the Cubs' dramatic 6-5 triumph with a catch on the warning track.