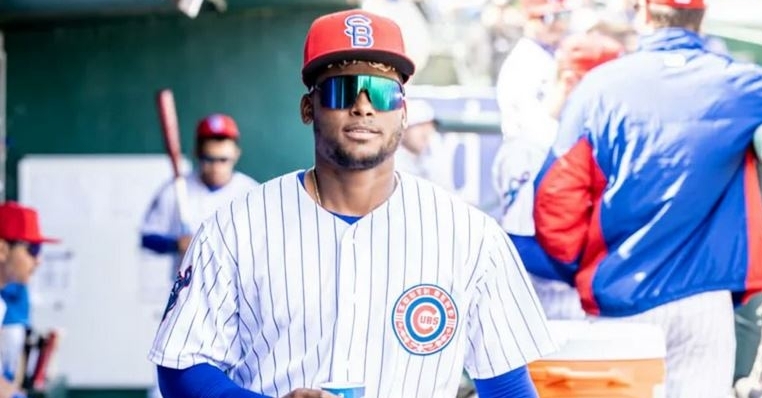 Canario is still raking in the minors

The Minor Leagues continues to be a busy time for the Cubs as all seven of their affiliates were in action. Once again, wins were hard to come by, especially in the full-season leagues, but fans have to be encouraged by some of the play they have seen.

The Cubs have gotten into some kind of funk they can't seem to shake and that continued to be the case on Friday. Not only has Toledo taken all four games of the series so far, but at 25-32, this is the only team under .500 in the Cubs minor League system among full-season squads.

Back with Iowa after making his major league debut was Caleb Killian who was not at his best on Friday. The Right-hander only lasted 3 2/3 innings while allowing three earned runs in the process. He did strike out six and only walked one, but he needs to get back on track.

From an offensive side of things, the Cubs pounded out 16 hits compared to just eight from Toledo. That just goes to show it is about the quality not quantity as the Cubs were looking for big hits al game. Nelson Velazquez is starting to heat up as his RBI single put the Cubs on top 1-0 in the first only to see Trayce Thompson give the Mud Hens a 2-1 lead with his homer.

A Carlos Sepulveda double and Dixon Machado single had the Cubs up 3-2 in the second before Narcisco Crooks made it 4-2 with his third inning homer. Darius Hill and Levi Jordan would add RBI singles later as the Cubs held a 6-3 lead and just three outs to go. Unfortunately for the Cubs, a pair of wild pitches helped jumpstart a four-run inning as the Josh Lester Sacrifice fly walked off Iowa 7-6.

Who needs pitching in Mississippi right now as the ball has been flying all over Biloxi. With Anderson Espinoza and Peyton Remy combining to allow 14 runs in just over seven innings of work, that is not acceptable and the Smokies fell because of it.

Offensively, the Smokies were led by Alexander Canario as he picked up three hits to go with his five RBIs. Three of those RBIs came off his fifth inning homer as he continues to make hard contact. Matt Mervis, Brye Ball and Jake Slaughter all had multi-hit efforts as the Smokies were unable to find a way to win.

24 total runs cross the plate in a barn-burner in Biloxi. pic.twitter.com/6JXAgrksDl

The South Bend Cubs have been slipping of late, but nothing has been as bad as this series with Cedar Rapids. Following another lopsided affair, the Cubs are not sitting at 1-3 in this series and are ready for it to be over. Daniel Palencia did what he could do across four innings allowing just two runs to go with his four strikeouts.

Unfortunately for him, the bullpen was unable to keep things close as Riley Martin continued his high-A struggles allowing the game's final four runs. The lone run for the Cubs came in the first inning when the streaking Yeison Santana picked up an RBI double to make things 1-0. It was all Kernels after that as they ended the game with six unanswered runs with Christian Encarnacion picking up three of those RBIs in the win.

See you again tomorrow night back at Four Winds Field at 7:05 ET. pic.twitter.com/js5x2gCbMm

The lone full-season team to find a way to win on Friday was the Pelicans who topped Carolina 5-3. Getting the start and earning the win was right-hander Porter Hodge who gave the team five innings of one-run seven strikeout ball to improve to 4-1 on the season.

After falling behind 1-0 in the third, most of the Pelicans' damage came in the fourth when three runs came across to score. The first of those runs came from the Kevin Alcantara two-run homer as his breakout season continues.

Kevin Alcantara’s seventh big fly of the season is a two-run homer.

Pelicans 3, Mudcats 1 in the bottom of the fourth. pic.twitter.com/EOjndsMwlG

A wild pitch later in the inning made things 3-1, before the fifth inning James Triantos triple extended the lead to 4-1 and provided the game-winning hit.

Already with one RBI in the game, Eduardo Garcia homered in the sixth as did Jackson Chourio in the eighth, but it wouldn't be enough to take down the Pelicans as they remain in a dog fight with Charleston for first place. Despite the five runs, the Pelicans had just three hits with Alcantara (2) and Triantos responsible for those hits and three RBIs.

It took four games and a ninth-inning run, but the ACL Cubs won their first game of the season. Moises Ballesteros and Cristian Hernandez continue to do their thing at the plate with Ballesteros picking up an RBI double in the first to put the Cubs in front before a fielder's choice error gave the Cubs a 3-0 lead in the second.

After the Brewers tied it up with a Jonatan Guzman double in the fourth, Ballesteros cashed in again in the fifth using an RBI to put the Cubs back in front. Once again, the Brewers had an answer as they managed to tie the game up off a balk before the Dilan Granadillo single in the ninth lifted the Cubs to the win. Granadillo was one of several players with multiple hits, joining Ismael Mena, Ballesteros, Cristian More, and Pedro Ramirez.

While the Chicago Cubs are playing the New York Yankees, the DSL version of the Cubs also saw the Yankees and fell 4-1. Despite striking out 10 hitters as a team, the Cubs pitchers also walked nine batters as they did not make life easy on themselves.

Those walks helped three runs come across without the strength of a hit as the Fidel Montero fifth-inning double was the lone hit that brought home a run. For the Cubs, four hits won't get it done with Offerman Hernandez picking up the RBI double in the second in what was otherwise a quiet night.

Unless things have changed in terms of how the DSL format works, this was the final meeting between teams on Friday with the Pirates winning again 5-4. Most of their damage came in the middle innings when the Pirates scored two in the third and three in the fifth to take the 5-1 lead.

Gustavo Armas put Pittsburgh in front for good with his third-inning RBI double before a passed ball in the fourth brought the Cubs within 2-1. The big blow came in the fifth inning when Carlos Tirado got into a pitch and deposited it over the fence for the three-run shot helping the Pirates bust things open at 5-4.

Trailing by three in the seventh, the Cubs at the very least made things interesting as Gouri Lubo continued his impressive start with an RBI double that made things 5-2. The very next hitter saw Daniel Ferreira come through with a two-run single and just like that it was a 5-4 game and still only one out. That 5-4 score is how things would end as the Cubs couldn't come up with another hit late.

In a David vs. Goliath type of matchup, the Fighting Irish went into the top Seeded Volunteers and came away with an 8-6 Super Regional win. Not known as a huge homer team, the long ball certainly played a role in the Irish's success with Carter Putz putting them in front 2-0 in the first before a solo shot in the second made things 3-0. Add in a Jack Zyska homer in the third and the Irish had a 5-0 lead early.

Typically a lead that large is more than enough for Austin Temple, but this is the Volunteers we are talking about as you had to think they would chip away. Trailing 5-1 after adding a sacrifice fly, Notre Dame played long ball yet again with Jack Brannigan making things 8-1 Irish in the fifth. Things got a little dicey the rest of the way as the top-seeded Volunteers wouldn't go down easy. Homers by Trey Lipscomb in the fourth and Jorel Ortega in the sixth made things 8-3 before Lipscomb came through with a double in the seventh to pull within 8-5.

Jordan Beck added a ninth-inning homer to make things 8-6, but that was as close as things would be as the Irish slammed the door to pick up the game one win. With the win, Notre Dame needs to win just once more over the next two days to punch their ticket to Omaha.