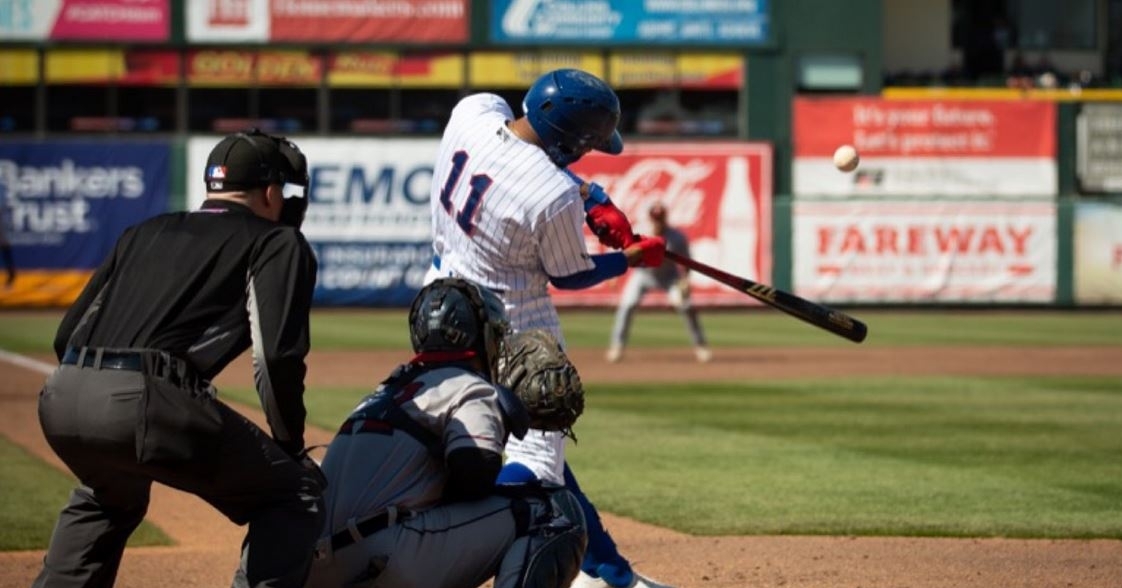 Another night and another winning showing by the Cubs organization as they managed to go 4-3 on the day. While the rookie leagues struggled apart from DSL Red, it was the full-season leagues showing up in a big way yet again as they have finally started to win more consistently again.

Anchored by a pair of three-run innings late in the game, the Cubs took what was a close game and flipped into a 9-3 win. In what was more of a bullpen game for the Cubs, Wyatt Short made the start and allowed just one run in four innings. He turned things over to Eury Ramos, Bryan Hudson, and Cayne Ueckert as Ueckert was charged with the other two runs.

Not only did Iowa strike first, but it came from a player who changed his name as Clint, who has now become Jackson Frazier, ripped an RBI double to the Cubs up for good 2-0. Stuart Fairchild did his best to keep things close in the early going with a solo homer in the second, but the Cubs pitching had no more of that until late.

Leading 3-1 in the sixth, Iowa busted the game wide open with three runs coming home to score as Greg Deichmann, Carlos Sepulveda, and Trent Giambrone all had RBI hits to make things 6-1. Add in three more runs in the seventh to extend the lead to 9-1, and Iowa cruised for the 9-3 win. Darius Hill and Narcisco Crook had three hits to lead the way, with Frazier and John Hicks adding two.

That's a win for the good guys ?? pic.twitter.com/1YJnrQ08Fr

The only full-season team to fall on Friday was the Smokies, who were doubled up by the Lookouts. After Riley Thompson opened the game with two innings of one-run ball, Chris Clarke took over, giving Tennessee 5 2/3 innings. Despite his one walk and four strikeouts, Clarke was charged with two earned runs as the Lookouts pushed across three runs after the seventh inning to pick up the win.

Thompson is still rounding into form after missing nearly three years of action, so don't expect him to go very deep into games. After allowing a second-inning single to Michael De Leon, the Lookouts had the 1-0 lead only to see the Smokies start to rally back.

Matt Mervis tied things up in the third with his first triple of the season. That 1-1 score would hold until the sixth inning when Chase Strumpf picked up an RBI single to put the Smokies in front 2-1. Not only did that score appear to be good enough, but Alexander Canario showed off his cannon of an arm by nailing a runner at home earlier in the night to keep the Smokies on the right track.

That was until the seventh inning when the Lookouts used a pair of James Free homers combined with the Isaiah Gillham homer to storm in front and cap off the 4-2 win. The Smokies were held to just five hits as Jake Slaughter posted two of those hits.

It was a'ight. We will try again tomorrow. pic.twitter.com/gOWmyrvFMe

It is nice to see South Bend getting back on track after enduring several weeks of challenging series. With Kohl Franklin back on the mound, the right-hander delivered a much better outing giving up three runs in three innings. However, only one of those runs was earned, making his line look much better.

Following Yovanny Cruz's scoreless inning in his season debut, it was Joe Nahas getting the ball as he went the rest of the way, allowing one run and striking out six. Peoria managed to keep the pressure on early, scoring on an RBI single in the first and then a wild pitch in the second to lead 3-1. Fortunately for the Cubs, that was the last time they would trail as they rallied for six-unanswered runs and 12 of 13 the rest of the way.

Three of those runs came in the third, with Yohendrick Pinango picking up an RBI single ahead of the Owen Caissie double that put the Cubs in front 4-3. Moving to the fifth, you had Caleb Knight cash in with a double before the Jake Washer homer made things 7-3.

Hoping to rally off the Cubs pen, Carlos Soto pulled within 7-4 as his sixth-inning double ended the South Bend scoring binge. That double was Peoria's final run of the ball game as the Cubs closed the game with six unanswered runs, with Pinango hitting his 10th homer late.

Nearly everyone in the lineup had a hit, but it was Knight with the hot hand picking up four hits with three RBIs.

One night after clinching the first-half division title, Myrtle Beach was looking to start their second half on a winning note and did so with a 10-4 win. Tyler Schlaffer may have gotten a no-decision, but after allowing just one run in four innings has now made it four straight starts allowing two runs or less.

Not only did the Pelicans offense get things started with an Ezequiel Pagan singled in the first, but they would add two more in the second to jump in front 3-0. The Cannon Ballers started to mount a mini-rally in the second inning, with Colby Smelley picking up an RBI double with a wild pitch following suit in the third to close the deficit to 3-2.

Kevin Made pushed the lead back to three with a homer in the top half of the fifth, only to see the Cannon Ballers get them right back on a Wilber Sanchez single.

See ya later ball! Kevin Made homers to put the Birds up 5-2! pic.twitter.com/4RGvPP0Q1X

Leading 5-4 in the seventh, the Pelicans closed the game with five unanswered runs, with Matt Warkentin, Josue Huma, and James Triantos picking up RBI hits. Huma continues to stay hot in the leadoff spot, leading the way with three hits as all nine starters had a hit.

Good start to the second half! pic.twitter.com/in84kBCyt2

Things were a rough go in the rookie leagues, with ACL falling 9-4. Perhaps the hardest part to swallow in this one was that the Giants scored eight of their runs after the sixth inning, as Kenyi Perez was solid in his three innings.

Solid or not, the Cubs offense scored all four of their runs in one inning, but trailed 8-4 when it was done. Christian More opened the scoring in that inning with a two-run triple as Rafael Morel would add a sacrifice fly. Liam Spence also got on the board in that inning with an RBI single, but it wasn't enough to overtake the Giants.

Pitching was the name of the game on Friday as the DSL Red team came to play. Freilyn Silverio, Scarlyn Lebron, and Stanley Guzman combined to allow just three hits walking one and striking out nine.

Three of the Cubs five runs came via the wild pitch, with Erbin Jaque adding a triple as part of the four-run fifth to lead the Cubs to the win. Adan Sanchez paced the offense with two hits.

A six-run second did the Cubs in as the Dodgers built a considerable lead and didn't look back. Daniel Ferreira got things started with a two-run single in the first, but then the Dodgers ripped off six runs in the second to take a 6-2 lead.

They then added four more runs in the fifth inning to seize control even more as they led 10-3. Looking to mount a comeback, the Cubs started making some noise in the sixth as Josefralin Alcantara picked up a homer followed by the Early Tatis triple to bring things within 10-6. The Dodgers would add another run before the game finished and won by that 11-6 score.