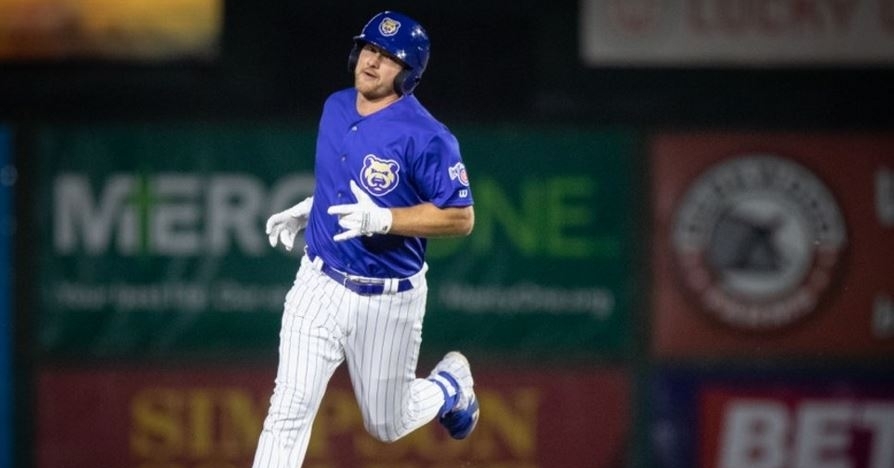 Friday was a rough one in more ways than one for the Cubs entire system. The major league team was blasted by the Cardinals 14-5, but the minor leagues saw themselves go 1-2 with another game being suspended and the potential for them to fall to 1-3.

To make matters worse, top prospect Brennen Davis underwent back surgery earlier in the week, and it appears his season may be over.

On the positive side, the Cubs will see Caleb Killian make his major league debut on Saturday as things are starting to change on the Northside.

The past two weeks have been a struggle for Iowa as they are the only team in the Cubs system with a losing record. After falling in extra innings on Thursday, the Cubs were locked into another tight contest that saw them lose again in extras.

Brandon Leibrandt picked the worst time to deliver his worst start of the season as he allowed six runs across 4 1/3 innings of work. Thankfully the Cubs bullpen pitched very well, with Connor Menez, Dakota Mekkes, and Wyatt Short delivering scoreless outings until Erich Uelmen was touched up late.

The Saints grabbed a 1-0 lead in the first courtesy of the Roy Morales single as the fun was about to begin. Greg Deichmann continued to be one of the hottest hitters on the team, as he added another RBI single in the second to tie things up. Homers by Elliot Soto and Alex Kirilloff in the third put Saint Paul in front 3-1 as the Cubs continued to struggle against this team.

Like most of the games this series, Iowa always had an answer for the Saints, with Nelson Maldonado pulling them within 3-2 after his RBI single. Following a Michael Helman homer that saw the Saints extend the lead to 5-2, Deichmann was at it again as his fourth homer kept things close at 5-3.

Make it three straight games with a home run for Greg Deichmann! pic.twitter.com/65zqqdO8ZA

Now down 6-3 in the fifth, John Hicks not only brought the Cubs within 6-5 with his homer, but tied things up with an RBI double in the sixth. Deichmann followed that up with another RBI hit as Iowa was in front for the first time, 7-6. Looking to close things out in the ninth, Uelmen not only surrendered a game-tying single to Morales in the ninth, but was hit with the loss in the 10th as a fielders choice brought home the winning run for the Saints.

Sparked by a four-run first inning, the Smokies offense was alive and well as they scored 10 times in the first four innings. With Max Bain doing his thing on the mound and allowing just two runs across five innings, the Smokies were able to ease off the gas as they doubled up the Barons 10-5.

Bain battled through some early-game struggles allowing a first-inning run to score off the Craig Dedelow single. Thankfully, he was backed by a hungry Smokies offense as Chase Strumpf tied things up with a single of his own ahead of the Matt Mervis three-run tater to give the Smokies the lead for good 4 1.

Strumpf had a massive day a the plate as he added to that RBI single with a three-run homer in the third to make things 7-1.

The Smokies take the lead in the bottom of the first thanks to a Chase Strumpf RBI and a Matt Mervis 3 run home run! @CStrumpf @mmervis12 pic.twitter.com/3MmHVjI0IU

That is his 10th homer of the season, as he now leads the team in that category. Bryce Ball was looking to get back to his hot stretch as he connected for a three-run shot in the fourth to push the lead to 10-1.

Bryce Ball extends the Smokies lead with a 3 run home run in the bottom of the 4th! @bryceball_05 pic.twitter.com/0IMRJeQuuV

That would be all the offense the Smokies would need as Birmingham scored four unanswered runs to end the game, with three of those runs coming off of homers. Strumpf was the leader on offense, collecting three hits to go with four RBIs. Yonathan Perlaza, Ball, Mervis, and Bryce Windham also had multi-hit games, with Mervis and Ball driving in the other six.

Thank you, thank you very much.
Matt Mervis, Chase Strumpf, and Bryce Ball all homer in the dub. pic.twitter.com/OTL7DrkdAn

South Bend knew this series would be challenging, but four games into it, they are down 3-1. At best, they would be able to earn a sweep as the Dragons are just a great team. With Kohl Franklin struggling again, allowing four runs in three innings of work, the Cubs found themselves playing from behind early and dropped a 5-2 decision.

While Franklin struggled, Joe Nahas did not as he went the final five innings for South Bend, allowing just one run and punching out eight. Nahas played a massive role in keeping the Cubs in the game, but when you get 6 1/3 innings of two-run ball from Dayton starter Connor Phillips it is not easy to win.

A big reason for Franklin and his struggles this season has been the inability to keep teams off the board early. As if allowing a two-run double to Austin Hendrick in the first wasn't bad enough, Jonathan Willems took him deep in the second as the lead grew to 4-0. Add the Allan Cerda homer off Nahas in the fourth, and Dayton was up big 5-0.

For the Cubs, the offense was hard to come by as Yohendrick Pinango delivered a two-run shot in the sixth for all the offense.

Pinango pushes his hitting streak to 17 games with this dinger pic.twitter.com/mT6hQS1dly

The Cubs had just three hits in the game, with Luis Verdugo and Pete Crow-Armstrong grabbing the other two.

PCA gets to second base so fast pic.twitter.com/KoFaeDAuuv

Although not an official game just yet, the Pelicans are in a difficult position as they trail the Shorebirds by four. Richard Gallardo was not at his best and delivered a rare rough outing that saw him allow five runs in three innings.

Two of those runs came off the Trendon Craig first-inning single, while he added a third RBI in the third off a groundout. Delmarva pushed across two more runs in that third, using a wild pitch and a Moises Ramierez double to get it done. Reggie Preciado gave the Pelicans their only run so far as his second-inning RBI single put them on the board.

Tonight’s game has been suspended in the middle of the fourth inning. Delmarva leads 5-1.

Play will resume at 5:05 tomorrow with a seven-inning game following. Gates open at 4:30.

Friday brings us a little bonus coverage as Notre Dame was the lone Chicago area team to qualify for the NCAA tournament. Matched up with league power Texas Tech, the two sides had to wait out a long six-hour rain delay before the Irish emerged victorious 3-2.

This was a game of polar opposite teams as Texas Tech features one of the best offenses in the country while the Irish rely on pitching. With Jake Bertrand getting the start and only going one inning before the delay set in, Notre Dame put the Red Raiders on notice of how good their pitching is as they struck out 19 Texas Tech hitters in the game.

Equally as good as Texas Tech, who came away with 15 strikeouts. The Irish managed to crack the scoreboard first, with DJ LaManna picking up a ground-rule double in the first to put Notre Dame in front 2-0. Given that the rain delay was about to kick in, no one knew how things would look, but the Irish nearly made that 2-0 score hold.

After missing out on plenty of chances throughout the game, Easton Murrell came through in the eighth as his RBI single brought things back to even 2-2. Fortunately for the Irish, that tie was short-lived as they managed to grab the lead in the bottom of the eighth off a wild pitch and hung on to win 3-2. They will now face the winner of the UNC Greensboro and Georgia Southern Game.