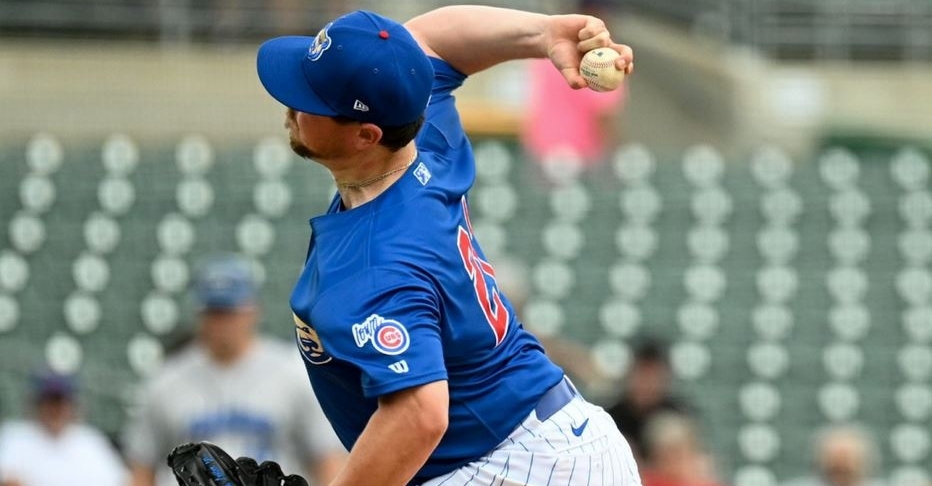 Wednesday was a much quieter night on the diamond as the Rookie League teams were off for the night. That means it was time to focus solely on the full-season leagues for the first time since Sunday, and man, did they put on a show.

Despite the Tennessee Smokies dropping a tough one to the Pensacola Blue Wahoos, the Cubs saw their system post a 3-1 record on the evening. That was their best record in over a week, as things were on the upswing last night.

It has been a while since you could say pitching led the way for Iowa. That was the case on Wednesday as Mark Leiter Jr and company twirled a gem while some late-game offense allowed the Cubs to double up the Storm Chasers.

Although saddled with a no-decision, Leiter Jr was impressive in his five innings, allowing just one run on two hits while striking out six. With John Hicks putting the Cubs in front 1-0 with an RBI single in the second, Leiter Jr allowed his lone run in the fourth inning when Ivan Castillo took him deep for the solo shot.

With Aneurysm Rosario on to pitch the sixth, Omaha grabbed the lead off the Nick Pratto sacrifice fly. That lead didn't last long, with Zach Davis tying things up with an RBI single in the seventh before a costly eighth-inning error allowed two more runs to score, which proved to be the difference. Hicks was the lone player with multiple hits in the win, with Nelson Velazquez grabbing one hit.

Make that two in a row against Omaha! pic.twitter.com/mhI2u2ofcK

The Smokies had their chances to take down the Blue Wahoos, but couldn't cash in, falling in extra innings. Peyton Remy improved from his previous few outings but only lasted four innings, allowing three runs. On a positive note, he walked two and struck out five while the bullpen pitched very well.

Opposing Remy was Eury Perez, who held the Smokies to just one run through five innings before the offense got going. Three runs seem like a lot, but when all of them came on one swing from Thomas Jones in the second, his line doesn't look so bad.

Alexander Canario pulled the Cubs within 3-1 with a sacrifice fly in the fourth before a sixth-inning wild pitch made it 3-2. Still, on the comeback trail, Bradlee Beesley came through with an RBI single to tie things up, while Matt Mervis put the Smokies on top 4-3 with an RBI fielder's choice.

Looking to close things out late, Griffin Conine had other ideas as his ninth homer brought things back to even and helped force extra innings. With both teams failing to score in the 10th, Troy Johnston delivered the decisive blow as his RBI double lifted the Blue Wahoos to the 5-4 walk-off win. Yonathan Perlaza had the hot hand with three hits while five others recorded one.

Yonathan Perlaza tallies 3 hits, but the Smokies fall in extras to Pensacola. pic.twitter.com/U9SdE9LbH7

Despite allowing four runs in the first inning, the South Bend offense was more than up for the challenge as they topped Quad City 15-8. Manuel Espinoza overcame that rough inning to get through four innings, allowing five earned runs. A part from that, the Cubs pitching was excellent in a lopsided win.

Jordan Nwogu has been seeing the ball well lately and continued that with an RBI single to put the Cubs up 1-0 in the first. After Diego Hernandez tied things up in the bottom of the first with a single of his own, Peyton Wilson delivered a massive blow as his three-run shot made it a 4-1 game.

A two-run homer from Jonathan Sierra in the second brought the Cubs within a run before Casey Opitz tied things up with a single. With the score now tied 6-6 in the sixth, South Bend put the game away for good, using a massive six-run inning to do the job.

Nwogu was part of that big inning connecting for a solo shot to put the Cubs in front for good. That was followed by a bases-loaded walk for BJ Murray Jr, singles by Sierra and Yeison Santana, and a bases-loaded hit by pitch and fielders choice added to the mix.

The Cubs managed to push across three more runs in the eighth inning, with Yohendrick Pinango picking up an RBI fielder's choice ahead of the Owen Caissie single and Caleb Knight double to pull away 15-8. Santana was part of a trio of three-hit players, with Optiz and Knight joining him. Caissie, Nwogu, and Sierra added two hits, with Sierra collecting four RBIs.

If you like pitching, this is the series for you as a total of three runs have been scored. Fortunately, all those runs have gone to the Pelicans as they have picked up back-to-back shutout wins.

In desperate need of a bounce-back outing, Richard Gallardo delivered, giving the Pelicans 5 1/3 shutout innings and allowing three hits. Although he walked three, he struck out seven which was much needed. After Gallardo departed, the combination of Frank Scalzo Jr and Adam Laskey gave the team 3 2/3 hitless frames punching out five.

While the Pelicans had great pitching, the Nationals had strong pitching in their own right, with Andry Lara giving the Nationals six innings of one-run ball. That run proved to be the difference in the end, with Ezequiel Pagan cashing in with an RBI single in the sixth for the 1-0 win. Pagan was joined by James Triantos and Kevin Alcantara as each side had three hits.

Make that two shutouts in a row for the Birds.

Magic number down to six to clinch the first half.#MBPelicans pic.twitter.com/ZalQQN0IX6