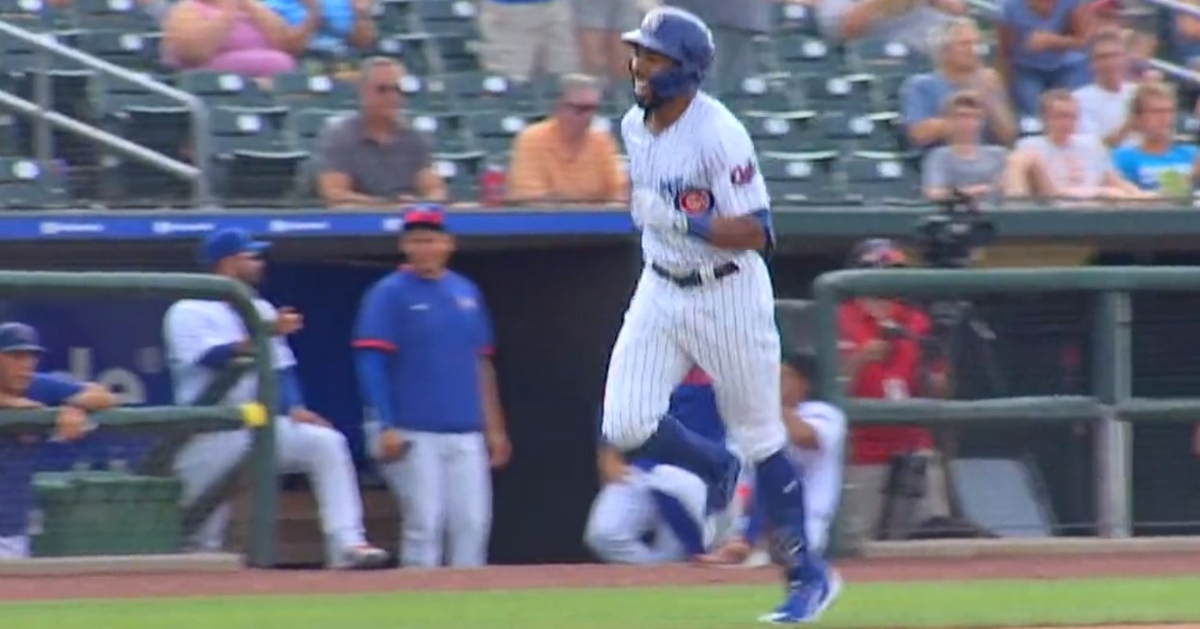 Crook was all smiles rounding the bases after his homer

Wednesday was another overall successful day as the Cubs came away with a winning record on the farm. Despite just four of the seven teams in action, five games were to be played, with the Tennessee Smokies and South Bend Cubs taking care of business. Considering how the Smokies had to play two games, that proved to be the deciding factor as the organization went 3-2.

Despite just scoring in two innings, the Bisons made that count as both innings led to eight runs and a doubling-up victory over Iowa. Cam Sanders continues to struggle at AAA, and some are wondering how many more starts he gets with Matt Swarmer coming back.

Not only did Sanders allow five runs, but he also allowed just three hits, as his five walks didn't help him. Despite his struggles, Sanders was backed by some early support, with Narcisco Crook going deep in the second for a 2-0 Cubs lead.

BOOM! Narciso Crook gives us the lead with this two-run shot! pic.twitter.com/CPoZXRQSnc

That lead would hold until the fourth, when things began to go south for Sanders. Not only did an LJ Talley single get Buffalo on the board, but a bases-loaded walk tied things up and continued to leave a massive threat on the bases. Logan Warmoth then cashed in with the biggest hit of the day as his bases-clearing triple was the game-winning hit and put the Cubs in a 5-2 hole.

Sparked by Dixon Machado, the Cubs began to chip away at the lead as his RBI singles in the fifth and seventh innings brought the Cubs to within 5-4. Unfortunately, that would be as close as they would get as Buffalo pushed across three runs in the eighth, with two of them coming off the Cullen Large homer to give the Bisons an 8-4 win. Both John Hicks and Machado had three hits, but Machado had two RBIs to go with those three hits.

After completing their suspended game earlier and coming away with an 11-7 win, the Smokies looked to cap off the sweep of Biloxi. Led by Chris Clarke and his solid six-inning performance, the Smokies were able to do just that and took down Biloxi 5-3.

Since arriving in AA, Clarke has seen some of his best moments, and after going six innings and allowing just three runs, he sits at 4-3 on the season. Clarke did find himself in an early 1-0 hole in the first until the Smokies offense gave him the lead right back in the bottom half. A Yonathan Perlaza homer led things off with the Smokies tying things up before a Bryce Ball single put them in front for good.

Perlaza starting the game strong! ?? Tied 1-1 in the bottom of the first. pic.twitter.com/ssbjEpdG0N

A single from Ball gives the Smokies the lead! 2-1 in the bottom of the first. #Smokiesbaseball @bryceball_05 pic.twitter.com/ObQe8slNZh

Now leading 3-1 after Bradlee Beesley picked up an RBI in the second.

An RBI groundout from Beesley! The Smokies extend their lead over the Shuckers 3-1. @Bradleelow pic.twitter.com/brhGMRADhG

He continued to add on to his big game as an RBI single put the Smokies in front 4-1.

Beesley with his second RBI of the night! Smokies continue to lead 4-1 in the bottom of the 4th. #CubTogether @Bradleelow pic.twitter.com/0FviTyWfCD

Biloxi managed to keep things close in the fifth using RBI singles from Garrett Mitchell and Tristen Lutz to pull within 4-3. However, that would be all the offense for them as Jake Slaughter capped off the scoring with a home run and a 5-3 win.

When this game was suspended on Tuesday, fans were treated to a 1-1 deadlock. That was until the Shuckers scored five times in the fifth inning as the bases-loaded double by Lutz was the big blow. That 6-1 lead remained intact until the seventh, when the Smokies scored 10 times to take the lead and finish things off.

In that inning, Perlaza had a pair of RBI hits, while Alexander Canario would hit his second homer of the game to put the Smokies in front for good 8-5. Slaughter, Ball, and Matt Mervis would all add RBIs in that inning as the Smokies did tons of damage in the win.

Make that 13 wins and counting as the Cubs have won the last 13 games against the Chiefs. Unlike some of their other wins, this was over almost as quickly as it started, with the Cubs pushing across six runs in the first and letting their pitching take care of the rest.

That proved to be a good thing as Kohl Franklin finally picked up his first win of the season by giving the staff five scoreless frames. It does help when your offense can give you six runs of support before you throw a pitch, as Fabian Pertuz, Owen Caissie, and Luis Verdugo picked up RBI singles to make things 3-0. Jonathan Sierra had the big blow in that inning as his bases-loaded double saw the lead double to 6-0 after one.

That lead would grow to 9-0 in the fourth, with Yeison Santana picking up an RBI single in the third before Pablo Aliendo followed suit in the fourth. The lone run of the night for the Chiefs came off a bases-loaded walk in the sixth as the Cubs continue to own the Chiefs 11-1. Pinango and Aliendo had three hits to lead the way and two RBIs.

All it took was one inning, but that inning was enough as the three-run seventh from the Woodpeckers proved to be the difference in a 3-1 win. Right from the game's opening pitch, you got a sense that pitching would set the tone as both teams were on point early.

For the Cubs, it was Luke Little getting the ball as he struck out six in three innings to lower His ERA to 2.97. Although unable to pick up the win, he did what he needed to keep the Pelicans close as the Kevin Made homer in the sixth gave Myrtle Beach a 1-0 lead.

Back to back nights for Kevin Made! ?? pic.twitter.com/5b4EhKGrkx

That lead was short-lived as Jose Miguel Gonzalez ran into big-time trouble in the seventh. Not only did the Cody Orr homer tie things up, but the Woodpeckers would score three times to take the win. Leosdany Molina added the game-winning RBI single while Jaxon Hallmark left the building to close out the scoring in the game.

The Pelicans had a chance to make things interesting with one out triple from Juan Mora in the night. However, back-to-back strikeouts would follow as the Pelicans dropped another game to open their second half 3-1.