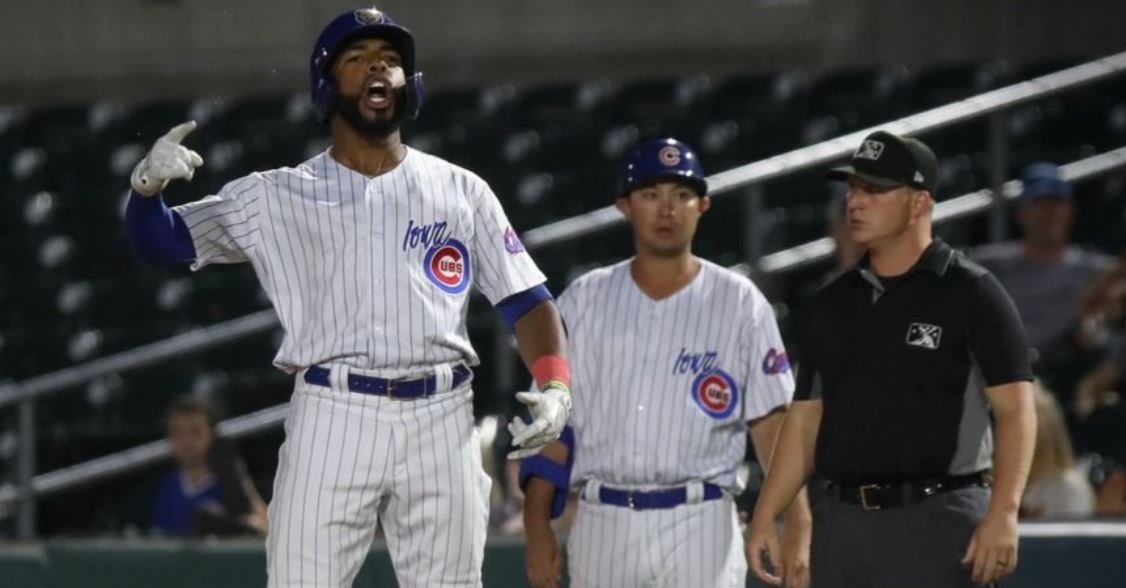 Crook is putting together an impressive 2022 campaign (Photo via Iowa)

Another day and another successful night for the Cubs minor league system. While the major league version of the Cubs is doing everything, but winning, the minors have given fans something to cheer about this season and has them excited for the future as long as it comes sooner rather than later.

Not only are two teams in first place right now, but add in the first-half champion Myrtle Beach Pelicans, and the Cubs could have three teams making the playoffs this season. Their success continued on Thursday as they posted a 3-1 record.

Led by a trio of two-run innings, the Cubs doubled up the Mud Hens to pull even in the series. Caleb Killian seems to be finding his groove yet again as the right-hander got through five innings to pick up his fourth win.

Killian was charged with two earned runs on five hits as he walked one and struck out five. Killian didn't get off to the greatest start with Kerry Carpenter putting Toledo up 1-0 in the first with an RBI single before that lead doubled in the third with the Josh Lester single.

Hoping their offense would come alive, Trent Giambrone got the Cubs on the board with an RBI double before Alfonso Rivas tied things up with a fielder's choice. With Killian now in complete control, the Cubs offense wanted to back him up as Narcisco Crook put the Cubs in front for good with a solo shot in the bottom of the fourth.

Narciso Crook gives us the lead with this solo blast! pic.twitter.com/8edgGbthKv

Darius Hill provided the game-winning RBI in that same inning as his sacrifice fly made things 4-2.

With that homer in hand, Crook put the game away in the seventh as his two-run single pushed the Cubs lead to 6-2. Toledo managed to grab a run off of Cam Sanders in the ninth when Lester connected for an RBI double in the Cubs 6-3 win.

Crook and Hill led the way with two hits, but it was the three RBIs from Crook that carried the ballclub to victory.

For the first time this week, the Trash Pandas managed to top the Smokies as some late-game offense pushed them over the top. DJ Herz continues to get better with each start, and after allowing two runs in 4 2/3 with eight strikeouts, it is safe to say he has adjusted to AA hitting.

An early Chase Strumpf homer backed him in the second before Rocket City took the lead right back in the bottom half of that inning.

I think Chase Strumpf’s hand is doing just fine. He homers in his first game back from the IL! pic.twitter.com/aPiGkCGgv5

Ironically, neither of those runs came on a hit as a wild pitch and steal of home gave the Trash Pandas a 2-1 lead. Outside of that, Herz was dominant, and the offense wanted to ensure they rewarded him for his efforts.

Starting with the fourth inning, the Smokies not only tied the game, but took the lead by scoring once in each of the next three frames. Jake Washer brought the game back to even with an RBI single in the fourth. That was followed by the Alexander Canario homer in the fifth, and a Jake Slaughter single in the sixth as Tennessee was back in front 4-2.

The bottom half of the sixth not only saw Rocket City tie things up, but it seemed to awaken their offense in general. With the game tied 4-4 in the seventh, Preston Palmiero delivered the game-winning blow as his two-run shot made things 6-4. Ryan Aguilar added an RBI single later in that inning for the game's final run as the Smokies fell 7-4.

Although streaky at times, Canario led the way on offense with three hits.

Canario. What you would expect him to do pic.twitter.com/WdbEdViPqT

Bryce Windham chipped in with two hits while Slaughter, Strumpf, and Washer had the remaining three.

Led by a strong pitching performance, the Cubs responded from Wednesday's rainout with a 3-1 win. Porter Hodge picked up his first win in High-A as he gave the Cubs 5 2/3 innings of one-run ball with eight strikeouts. His ERA now sits at 1.17 as he has fit in well since his promotion.

You wish you were as good as Porter Hodge. pic.twitter.com/hlrXsf7tJ3

Zac Leigh and Michael McAvene took over for the next three innings, where they walked two and struck out six. The only run Hodge allowed came in the second inning when Cole Cummings delivered the solo shot for an early 1-0 lead.

Wasting little time, the Cubs responded in the top of third as Yeison Santana, and Fabian Pertuz picked up RBI groundouts to give the Cubs the lead for good. The Cubs would add the game's final run in the sixth inning off a Pete Crow-Armstrong single as South Bend took care of business 3-1.

Armstrong had a great day as he was responsible for three of the team's six hits.

CUBS WIN!
Make it 3 wins a row as Porter Hodge and PCA steal the show! pic.twitter.com/UrLUUzFbOd

With their pitching setting the tone, the Pelicans had to rally late as some late-game offense led the Pelicans to a nice win. Tyler Santana continues to impress as the right-hander improved to 9-1 on the season.

Not only did he go seven innings allowing just one hit, but he struck out a career-high 10 men to lower his ERA to 2.28 on the season.

Had it not been for the Isaiah Greene single in the first, Santana would have thrown a shutout as the Pelicans were down 1-0 early. Juan Mora managed to tie things up with an RBI single in the bottom half of the first before jumping in front for good in the sixth.

Scott McKeon was the catalyst as his two-run single put the Birds in front 3-1. Moises Ballesteros added an RBI double in the seventh to push the lead to 4-1 as the Pelicans would take care of business 4-2. Josue Huma was one of three players to record multiple hits, joining McKeon and Matt Warkentin.