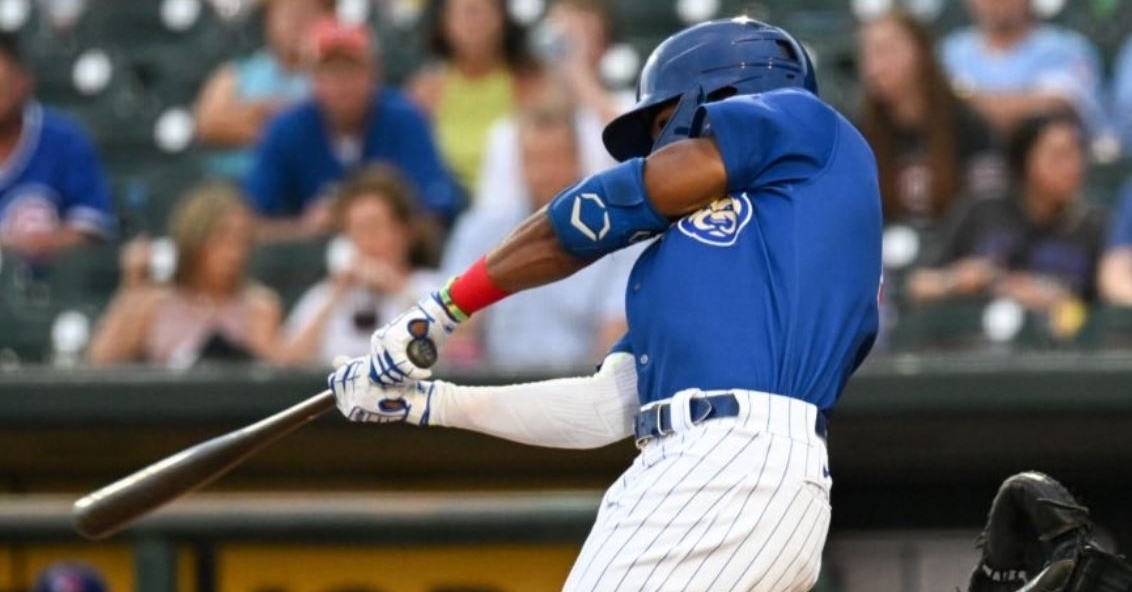 Crook is putting together an impressive 2022 campaign (Photo via Iowa)

Don't look now, but there could be up to three teams making the minor league playoffs this season, which would be huge for the Cubs. With another week of competition set to begin, the Cubs system got off to a great start, going 3-1 in full-season play and 3-2 overall.

Not even a late-game rain storm could stop Iowa from their hot start after the all-star break. Led by a strong pitching performance and an offense that scored four times in the final two frames, including three in the ninth, the Cubs improved to 3-1 since the break with a 6-2 win.

Mark Leiter Jr and Javier Assad were both outstanding on the mound and helped set the tone. Both went three innings, allowed three hits, and struck out five as they played a massive role in the team's win. Narcisco Crook wasted little time giving the Cubs the lead as his 14th homer put them in front 1-0 in the second.

That score held until the fifth, when Tim Beckham singled off Assad to tie things up 1-1. Iowa retook the lead with a wild pitch in the sixth, only to see Jake Cave strike back with a double in the seventh to bring things back to even 2-2. In the eighth, the Cubs took the lead for good before pulling away.

Jared Young cashed in with a game-winning RBI fielder's choice, but the Crook double in the ninth saw the Cubs build a 5-2 lead before the Darius Hill sacrifice fly capped off the scoring. Greg Deichmann led the way with three hits, with Crook and Hill adding two. Crook also had three RBIs in the win.

That's how we like to start a series! pic.twitter.com/cDfNjYlX0w

Don't let their 50-41 record fool you, as the Smokies have come out of the break firing on all cylinders. Not only that, but at 12-9 to start the second half, they are in first place in their division and are starting to smell the postseason.

Ryan Jensen battled through 4 1/3 innings of work as he allowed three earned runs, but was backed by an offense that has been playing great. Trailing 1-0 in the third after JJ Muno put Birmingham in front, Yonathan Perlaza left the building for the 12th time as the Smokies took a 2-1 lead.

Perlaza pounces on it! Smokies take the lead 2-1 in the bottom of the 3rd.?? #SmokiesBaseball pic.twitter.com/yPAnaUKw7s

The long ball was huge for Birmingham in the fifth as a pair of two-run homers by Raudy Read, and Craig Dedelow saw the Smokies put in a 5-2 hole.

Tennessee began chipping away at that deficit in the bottom of the fifth, with Bradlee Beesley picking up an RBI double and Perlaza an RBI groundout.

Beesley puts the Smokies within 2! 5-3 Barons in the bottom of the 5th. @Bradleelow pic.twitter.com/zcNr7EDh1F

An RBI from Perlaza in the 5th and an RBI from Windham in the 6th!! Smokies tie it up at 5. @b_windy20 pic.twitter.com/os7i2KTkSr

Bryce Windham tied things up in the sixth with an RBI groundout, but Perlaza came through in the seventh and capped off his five RBI day with another to give Tennessee a 7-5 lead.

YONATHAN PERLAZA BELTS HIS SECOND HR OF THE NIGHT TO TAKE THE LEAD!!!! pic.twitter.com/q2ld0gG4Ni

That homer proved to be the game-winner as Bailey Horn overcame some ninth-inning drama to strike out the side and recorded the save.

The Smokies take game one against the Barons! pic.twitter.com/IfnnMPxvSC

The South Bend lead continues to grow as we could have two if not three minor league teams make the postseason this year. Led by another high octane offensive output, the Cubs picked up another win and doubled up Lake County 8-4.

Dalton Stambaugh was demoted back to High-A, but put together a great showing on Tuesday. The right-hander went five innings, allowing three runs as he left with the lead. All the runs against Stambaugh came in the first inning, with Alexfri Planes going deep for a two-run shot ahead of the RBI single Gabriel Rodriguez. Apart from that, Stambaugh was good and was lights out the rest of the way.

A big reason for him leaving with the lead came from an offense that started off on the right foot. Not only did they score twice in the second off the BJ Murray Jr. homer, but they added two more on the Luis Verdugo homer in the fifth to grab a 4-3 lead. With Zac Leigh on to pitch the sixth, Aaron Bracho picked the perfect time to come up with a single as he tied the game back up 4-4.

That set the stage for the Cubs offense again, with Murray Jr delivering the game-winning double in the sixth to put the Cubs in front 6-4. Jake Washer added some significant insurance with his 14th homer in the eighth, but the Cubs continued to roll once again. Murray Jr not only led the way with three hits, but also with four RBIs.

Despite already clinching a playoff spot, things have not been as smooth for the Pelicans in the second half as they were the lone full season to fall again. They are now just one game above .500 but are still close enough to win both the first and second-half division titles.

Luis Rodriguez was on the bump to start this one, and, despite some significant command issues through three innings, he allowed just one run. Yovanny Cabrera relieved Rodriguez and was hit way too hard as he was saddled with the loss.

Command issues or not, Rodriguez had the benefit of pitching with the lead as Felix Stevens delivered an RBI single in the second. With Stephen Paolini tying the game in the third, Augusta started to turn things on in the fifth when the Adam Zebrowski homer put the Greenjackets in front for good 4-1.

The Pelicans tried their best to make a comeback with Alejandro Rivera picking up a sacrifice fly in the seventh before the Josue Huma single made things 4-3. Unfortunately for Myrtle Beach, a costly balk led to the winning run in the seventh as the Stevens single in the ninth would be as close as they would get. Stevens led the way with two hits and two RBIs, with Huma and Matt Warkentin having the other two hits.

Didn’t have as much fun tonight as Chappy from sales’ dad.

In rookie league action, the ACL Cubs fell to the ACL Brewers 8-4. Pedro Ramirez raised his average to .309 after a two-hit two RBI day, with Cristian Hernandez grabbing two hits of his own. Didier Vargas had another impressive showing on the mound as he struck out seven in four scoreless frames to lower his ERA to 0.53.

South of the United States in the Dominican Republic, you had the DSL Blue Cubs take down the DSL Red Cubs 6-5. Joan Delgado led all hitters with two RBIs as he paced the DSL Red squad. All but one DSL Blue player had a hit, with Jairo Diaz coming away with two.