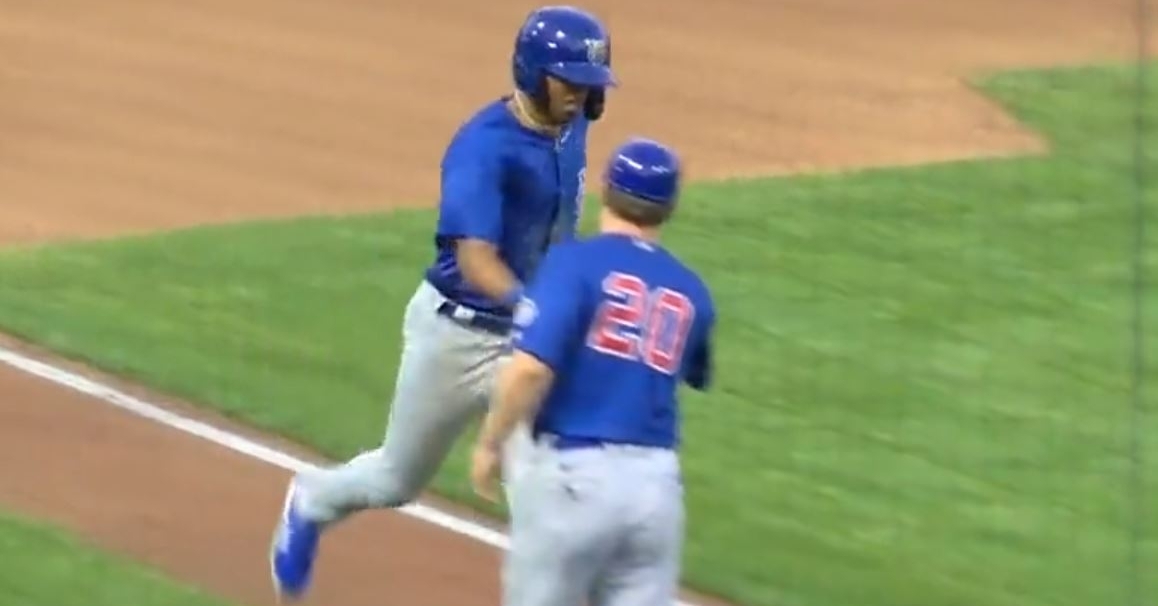 Davis hit a homer in his return to the I-Cubs

The Cubs couldn't have asked for a better start to their week as they went a perfect 3-0 on the diamond. Had the Pelicans not had their game postponed due to torrential rain and thunderstorms, there could have been a rare 4-0 night on the field.

In the most surprising win of the day, the Cubs used a fantastic pitching effort to shut out the Clippers 4-0. Since getting a rare start last time out, Wyatt Short has been nothing short of impressive, giving Iowa another five scoreless frames to win his second straight start.

He walked two and struck out five before turning things over to Kelvin Castro, Dakota Mekkes, and Nicholas Padilla, who took care of the rest. When it comes to offense, all Iowa needed was one run, but they did themselves a favor by scoring three times in the first inning. John Hicks delivered the first RBI hit with a two-run single before an Alexander Canario sacrifice fly made things 3-0.

That would be the final run until the seventh inning when Brennen Davis made his return to AAA known with a loud homer to cap off the Cubs 4-0 win.

With this solo home run, Brennen Davis is your @EMCInsurance Player of the Game. pic.twitter.com/e7ODAwX3u6

Davis was one of six players with a hit as he joined Hicks, Darius Hill, David Bote, Michael Hermosillo, and Levi Jordan.

A final score we can get behind ?? pic.twitter.com/shKYCI4ssY

Not only did the Smokies drop their magic number by one with the win, but a Birmingham loss with this win trims two numbers off their playoff spot. Led by solid pitching and some late-game offense, the Smokies did what they had to do and took care of Mississippi in game one.

DJ Herz delivered his best outing in terms of runs allowed, but his command has been a massive issue in AA. Sure, he was charged with two runs (1ER) in 3 1/3, but he walked six while also striking out six, which doesn't help your pitch count. Dalton Stambaugh took over from there to earn the win before handing things off to Samuel Reyes and Zac Leigh to finish off the Braves. That group walked 10 batters in the game, but they also struck out 14.

After walking in a run in the first inning to put himself behind, the Smokies gave Herz a little run support in the third when a Jake Slaughter single tied things up ahead of the go-ahead Yonathan Perlaza double. Another bases-loaded walk in the bottom of the third made things 2-2 as Herz continued to battle with his command since his promotion.

However, give the Smokies and their staff a ton of credit as they not only bailed Herz out, but didn't allow a run the rest of the way, with Chase Strumpf delivering the game-winning RBI double in the sixth to put Tennessee in front 3-2. Still holding that lead late, the Smokies began to pull away as Nelson Maldonado, and Bryce Windham connected for RBI singles in the eighth to extend the lead to 6-2, while Miguel Amaya added a ninth-inning RBI single to close out the game.

Amaya returned to the lineup and delivered two hits as he joined Perlaza as the team leaders. Bryce Ball, Slaughter, and virtually everyone else had a hit, with Cole Roederer being the only player not to tally a hit.

Despite allowing a pair of ninth-inning runs to create some late-game drama, the Cubs took care of business as they dropped their magic number from eight games to six with the win. They were helped a little by the Beloit loss, but this team knows all it has to do is take care of their business, and they will be playoff bound.

Luke Little is certainly making an impression on the South Bend coaching staff, and after going four hitless innings with five strikeouts to lower his ERA to 0.90, you have to wonder how good this man can get. Yes, Little did play a considerable role in the win, but so did the offense in the early going as they gave him and the rest of the pitchers some runs to work with.

Luis Verdugo put the Cubs in front 1-0 with an RBI groundout in the first inning, only to see Pete Crow-Armstrong double that lead in the third with an RBI single. Led by three walks in the fifth from Chris Kachmar, Lansing cut the deficit in half as a bases-loaded walk made things 2-1. Not to be discouraged, South Bend tried to put the game away in the bottom of the fifth as an Armstrong double, and the Verdugo single put South Bend in front 4-1.

They would maintain that lead until the final inning when Lansing started to mount a little comeback of their own. With Brad Deppermann struggling to get guys out, Sahid Valenzuela and Max Muncy picked up RBI singles to close the gap to 4-3 and forced Jarod Wright into the game.

Despite walking the first hitter he faced, Wright induced a game-ending grounder as the Cubs continued to take care of the ask at home with another win. Verdugo and Armstrong accounted for all four RBIs, but the three hits from Armstrong led the way as he raised his average to .296 with South Bend.